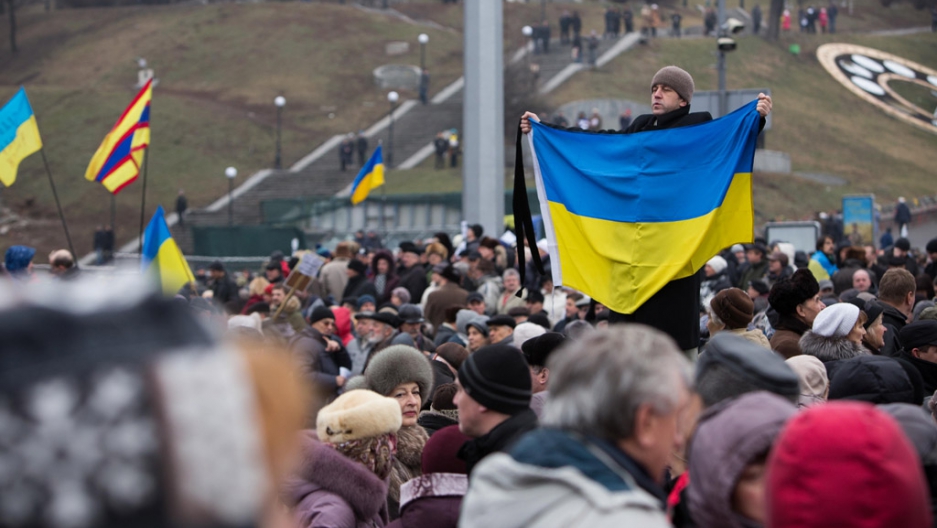 KYIV, Ukraine — Thousands of Ukrainians rallied here in the country’s capital on Sunday to call for swift peace in a conflict with pro-Russian separatists that’s claimed nearly 5,000 lives.

Their slogan? #JeSuisVolnovakha, a reference to the city in eastern Ukraine where officials say a rebel rocket attack struck a passenger bus last week and killed 13 civilians.

The separatists denied responsibility for the attack — despite evidence to the contrary — but observers say many pro-Ukraine supporters saw the event as an opportunity to renew flagging international interest in a nine-month-long war that’s ravaged their country.

After a week of promoting the Charlie Hebdo-inspired hashtag on social media, demonstrators filled the streets of central Kyiv on Sunday carrying placards declaring, in French and Ukrainian, “I am Volnovakha.”

“We’re living through one in the same kind of pain,” said Nadia Fedorivna, a 58-year-old demonstrator who said she wanted to show Europe that “we’re together.”

Even President Petro Poroshenko and Prime Minister Arseniy Yatsenyuk extended their support, having appeared at Sunday’s rally with their own signs.

#JeSuisVolnovakha We will remember each and every one murdered by terrorists. pic.twitter.com/YcvbWYrEye

Officially, the war against pro-Russian separatists is an “anti-terror operation,” and the rebels themselves — who receive crucial Kremlin backing and run their two self-declared republics with iron fists — are “terrorists.”

But that’s been a tough sell to many Western observers, who prefer to see the conflict as a messy domestic affair rooted in years of political mismanagement and only recently sparked by the power of Russian state propaganda.

Russia may be sending mercenaries, armaments and military forces to prop up the violent rebellion, but many foreign Ukraine-watchers don't exactly see it as the ISIS of the east.

Dear Ukrainians, I'm utterly sad by the killings of Volnovakha, but deeply upset by the hashtag #JeSuisVolnovakha. Nothing in common (1/2)

#Volnovakha is the episode of a WAR, even if your government keeps calling it ATO for financial reasons, it's not terrorism, but a war (2/3)

So far, they haven’t had much success.

A man stands with his "JeSuisVolnovakha" sign at a rally in Kyiv on Sunday.

What's more, even some pro-Ukraine supporters at home argue any comparisons between the Volnovakha and Charlie Hebdo tragedies are inappropriate.

That's notable because the conflict in the east has also helped galvanize much of the population.

“And what do we have here? Has [all of] Volnovakha been killed?”

Zubyuk argues the Volnovakha tragedy has been exploited for “geopolitical apery” that devalues both sets of victims. He also says the campaign places unrealistic expectations on world leaders to stand up for Ukraine after months of stalled negotiations.

Others say the campaign — however controversial — has brought some positive results.

Yevhen Fedchenko, director of the Mohyla School of Journalism in Kyiv, agrees with critics that the Volnovakha tragedy cannot be compared to the Charlie Hebdo shootings, but he nevertheless supports the gesture.

“Even if this campaign brought up a lot of debate over whether it’s comparable at all,” he said, “that’s OK, because it was probably more important for Ukrainian internal solidarity, even if it didn’t attract much solidarity from the outside.”