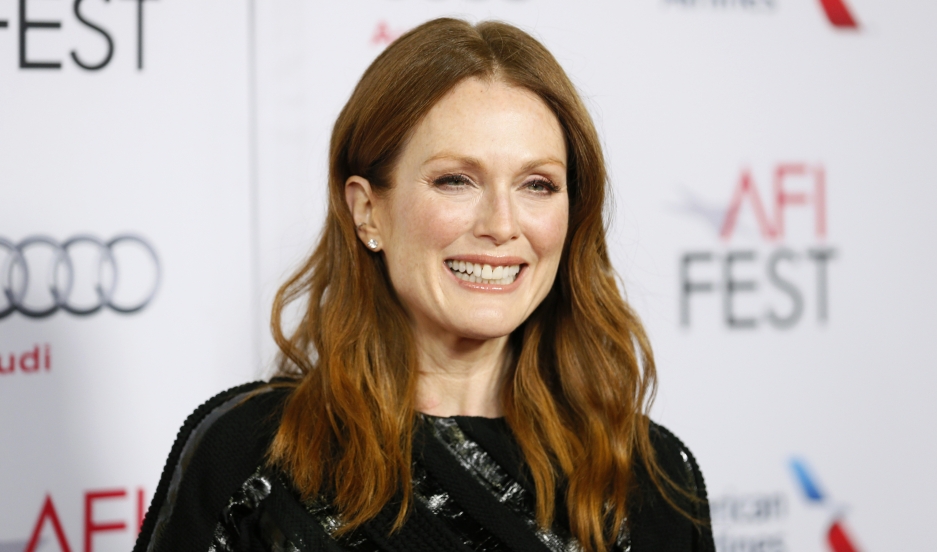 Cast member Julianne Moore poses at a special screening of the film "Still Alice" during AFI Fest 2014 in Hollywood on November 12, 2014.

The Takeaway's Movie Date Podcast team is here to help you prep for your weekend! Rafer Guzman, a film critic for Newsday, and Kristen Meinzer, culture producer for The Takeaway, review the new films hitting the box office.

Starring Kevin Hart and Josh Gad, our co-hosts think this R-rated, wedding-themed comedy is crass and violent — but also fun and surprisingly touching.

“I think it actually works pretty well,” Rafer says. “You’ve got Kevin Hart, who’s on a hot streak these days.”

In 2014, Hart started in several big-budget Hollywood comedies, including “Think Like a Man Too” and “Ride Along.” In “The Wedding Ringer,” Hart plays a best man for hire who helps a socially awkward guy navigate his wedding. Rafer argues the film is reminiscent of “Wedding Crashers.”

“Some of the humor is pretty crude,” he says. “But these two have real chemistry, it’s fun, and I think the movie’s got a nice little sensitive side to it that makes it work.”

Kristen agrees. “Overall, this movie had a lot of heart,” she says. “I was really surprised because I’m not a huge Kevin Hart fan, but ... I thought this was great. I loved them together, and I think anyone who liked ‘Hitch’ or ‘I Love You, Man’ is probably really going to love this movie.”

Slap that on a movie poster: “Kristen Meinzer Says Hart has Heart.”

Paddington, the little English bear who has been capturing children’s hearts for over 50 years, has finally made it to the big screen with some mixed results.

“This isn’t a horrible movie by any means,” Kristen says. “I think a lot of people will appreciate how sweet it is, but I would argue it’s a little too sweet and not enough happens.”

Despite tapping an Oscar winner like Nicole Kidman to star as the villain, Kristen says she’s not a fan of the film or the 3D animation it employs.

But as a parent, Rafer says he's always looking for a film he can deal with sitting through with his young children. For him, “Paddington” works.

“I would actually take my kids to see this,” Rafer says. “It’s 89 minutes long, and even then it feels a little padded out, but I think it works well. It’s got a good cast. Sally Hawkins, Nicole Kidman, Hugh Bonneville — they’re all really good in it.”

In “Still Alice,” Julianne Moore plays a professor struggling to hold her life and family together as she slowly succumbs to early-onset Alzheimer’s disease. It’s a role that won her a 2015 Oscar nomination, and Rafer and Kristen agree Moore’s performance is outstanding.

“She’s so good in this movie," Kristen says. "She just got that Oscar nod yesterday and I think it’s completely well-deserved. She takes us along on her journey with her ... I really was just totally floored by how great her performance is."

Rafer agrees that the film — which also stars Alec Baldwin, Kate Bosworth and Kristen Stewart among others — is a win.

“It is a terrific performance,” Rafer says. “I think without her, this movie would be a little bit formulaic and would feel a little bit like your standard television movie about the disease of the week ... But Julianne Moore is so amazingly good in it and I think it’s a well-deserved Oscar nod for her.”

Don't waste another weekend on bad movie picks! Subscribe to the Movie Date podcast from PRI's The Takeaway on iTunes.