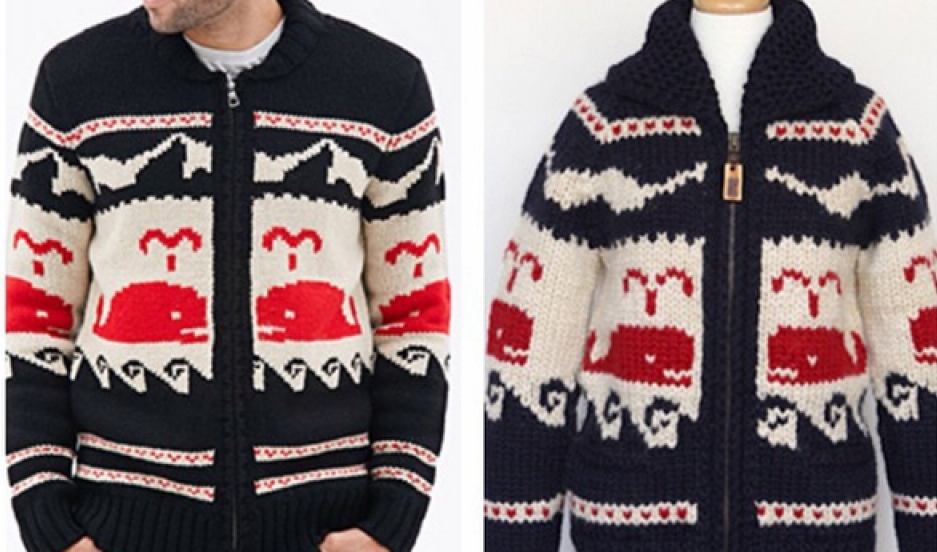 A Forever 21 sweater, left, is shown next to a sweater from Granted Clothing.

Courtesy of Forever 21 and Granted Clothing

A small Canadian clothing company is calling out retail giant Forever 21 for what it says are "blatant copies" of its sweater designs.

The British Columbia-based Granted Clothing company claims that Forever 21 stole two of its creations, without permission or credit.

"I’m pretty sure they got the design from us" says Granted co-owner Brian Hirano. “It looks very similar — not only the design but right down to the colors that they used.”

A short message from the designers: As independent business owners and designers of our garments we feel it is important to inform you of an unfortunate and ongoing problem in our industry. This utter lack of respect has literally left us shaking our heads in disbelief. On the left are imitations of our designs and on the right are our original designs made here in our Vancouver design studio. They are blatant copies of our designs, right down to the colours used. Local brands like us work day in and day out to create and sustain something unique and original only to find our designs taken and used without consent. We are not the only ones being exploited by large companies who clearly have no business morals. @forever21 The pressure to feed this trending "fast fashion" machine is pervasive and people are contracted by these big companies to scour the internet to find original designs without any regard, make a profit and offer no compensation to the original designers. They do not see the negative ripple effect they cause, only looking at short term profits and do not value a sustainable business structure. This tarnishes the original brand and identity which sometimes takes years or decades to create. Our company has managed to overcome many obstacles and will continue to move forward. In order to help us take a stand we ask that you share this with your friends and always be aware of your future purchases. Thank you for your continued support. +The Granted Family+ #forever21 #copy #badbusinessmorals #supportlocalbusinesses

A family shop established in 1978, Granted produces hand-knit wool garments sold in boutiques in the US, Canada, Japan and South Korea; sweaters sell in the $200 to $350 USD range.

Forever 21's acrylic version of the whale sweater is priced at $39.90. It has sold out.

“We are planning to take legal action,” says Hirano. “We have enough proof at the moment that these are our original designs, so we’re pretty confident in our case.”

Granted has received some big-name support on social media for its claims against Forever 21.

It's messed up @Forever21 ripped off sweaters from @grantedclothing with what appears to be a ripoff version of me. pic.twitter.com/MBFGG3yBYR

According to a 2011 Jezebel article, Forever 21 has been sued more than 50 times for copying designs from other fashion labels.

Forever 21 did not respond to our request for comment.