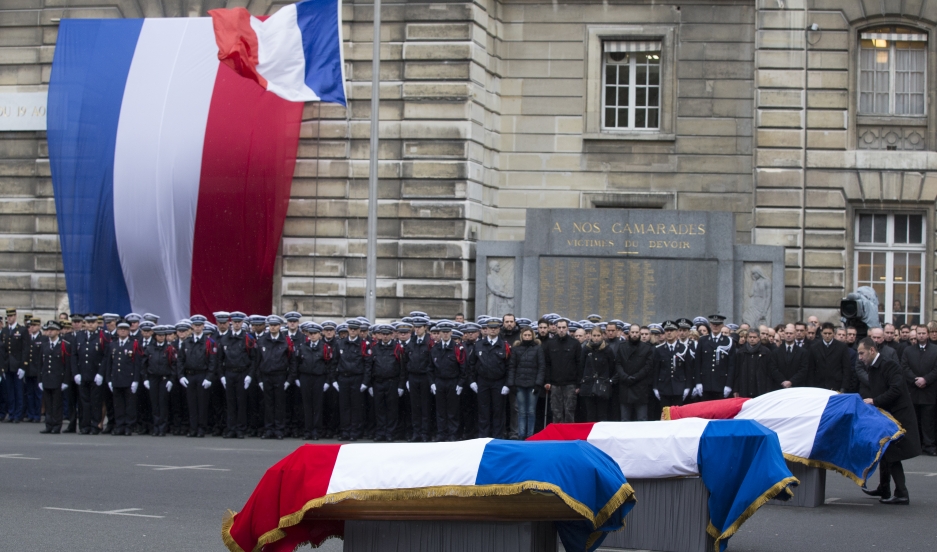 French police officers pay respects at a national tribute in Paris to the three officers who fell during last week's attacks by Islamic militants.

Troops and heavily armed police are highly visible on the streets of Paris and elsewhere in France after last week’s attacks.

On Tuesday, the three police officers killed by Islamist militants last week were honored in a ceremony led by President François Hollande. Bowing deep at each coffin, he awarded the three officers the Legion of Honor, the highest French order. They died, Hollande said, so that others could be free.

The French parliament observed a minute of silence for all 17 victims of the attacks, which began last Wednesday with the massacre at the satirical magazine Charlie Hebdo.

After that, French Prime Minister Manuel Valls told lawmakers that the country is not at war against Islam or Muslims. But he said France is at war against terrorism and radical Islamists.

Ten thousand troops have been deployed across France to protect potential targets, including Jewish schools and synagogues.

The armed presence? “It’s everywhere,” says Christopher Dickey, foreign editor of the Daily Beast and a Paris resident for many years. “It’s in all kinds of places where you wouldn’t expect it. Sometimes it points out a location or an apartment, something you wouldn’t have thought would be important to anyone. My wife was just passing a local department store, and said right across the street all of sudden she saw all of these armed guys. So there must be someone living in that apartment block, not far from ours, who’s important enough to protect.”

Dickey says it’s a sign of continued uncertainty. “I think absolutely there is a fear of more attacks.”

“What the security services have realized, to their enormous chagrin and shame, over the last few days, is that they missed something really very big indeed: the biggest terrorist attack on French soil in more than 50 years. And they are shaken. They don’t know what they don’t know at this point.”

Prime Minister Valls promised to increase surveillance. That’s provoked debate about the need for a US-style ‘Patriot Act.’ But Dickey says there is already an incredible amount of surveillance.

“French society is very different to American society.  A lot of things are done that people just don’t talk about, don’t mention, and that aren’t necessarily within the purview of the law as we might understand it. For instance, you may remember the New York City Police Department got into a lot of trouble with the public because of its surveillance of mosques and Muslim communities. Well, here in France, that sort of thing is just par for the course. The internal security apparatus prided itself quietly on the fact that it was able to recruit large numbers of Arabic-speaking officers, undercover officers, who became members of the various congregations and penetrated these societies. And that’s why they were fairly confident that they knew what was going on in this country. They can talk about more surveillance, more monitoring, but the truth is, they dropped the ball.”