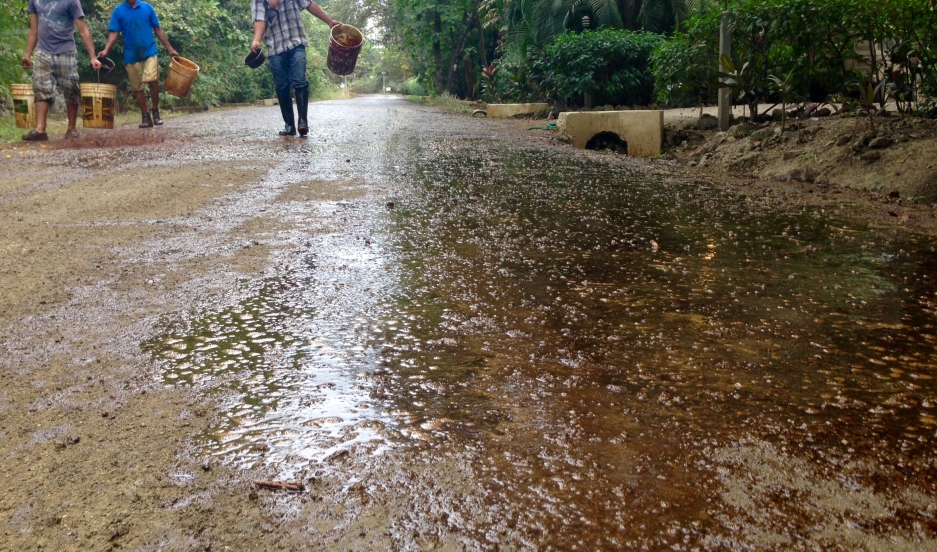 Workers pour molasses onto a road in Playa Guiones.

For the past two years, I've escaped Boston's January freeze by travelling south to Playa Guiones, a sleepy surfing town on the west coast of Costa Rica.

There isn't much to it. There's a handful of surf shops, a few yoga studios and plenty of bars where you can get a perfect watermelon margarita. But even though it's a beach town, it's not the smell of the ocean that wafts in the air here: It's the scent of a giant gingerbread house.

The source of the aroma is sticking to my flip-flops: It's molasses. The streets here are covered in it.

In the middle of town, there's a truck with dozens of 50 gallon drums stacked in its bed. 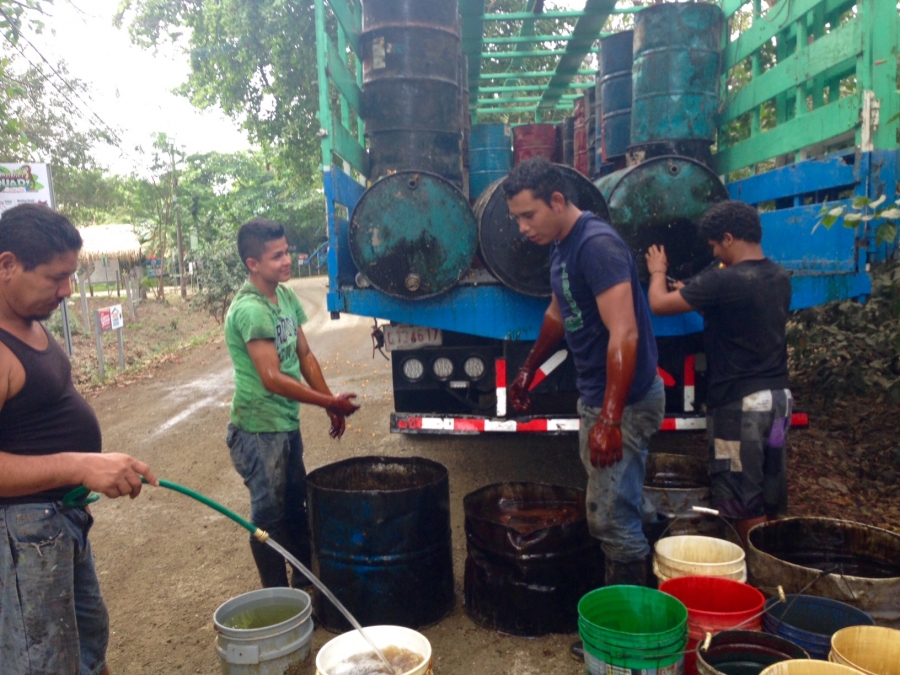 A work crew pours drums of molasses into smaller buckets. 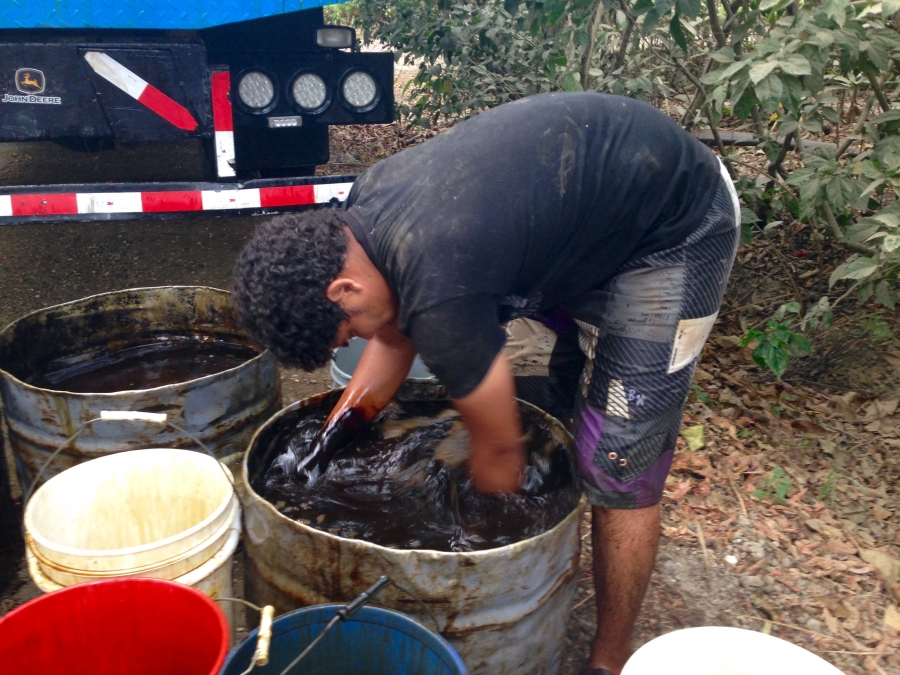 They add water to loosen it up, and then they dump it on the road. 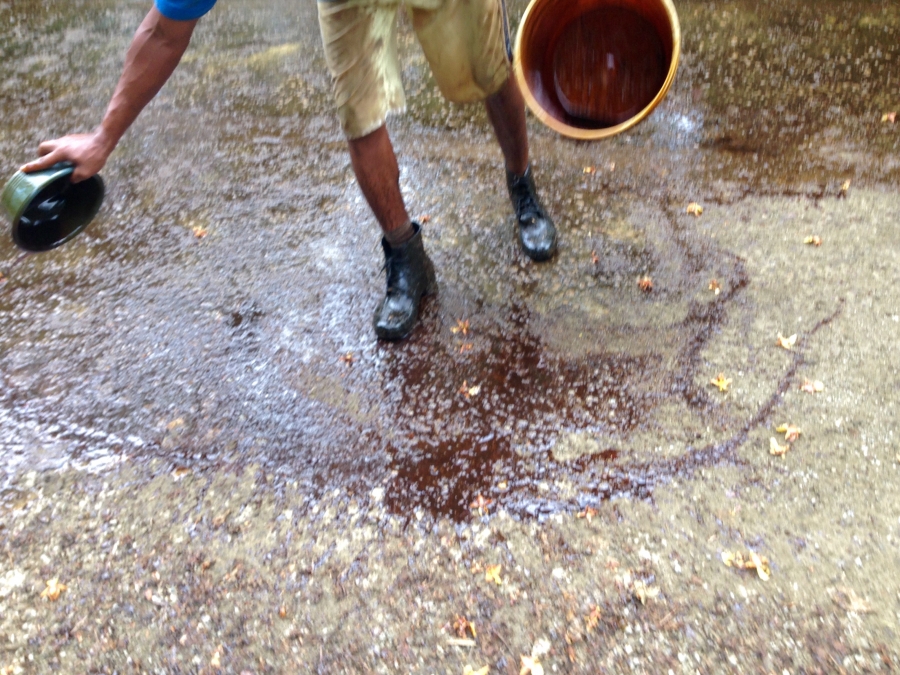 Pouring molasses onto the road

I interrupt the crew leader, Joaquin, to ask why he and his guys are turning the town into a giant fly trap. He tells me that they're spreading molasses to stop the dust from getting into the air. He also explains that he and his crew aren't government workers — they're hired by the people who live along this street.

The molasses men are just finishing up in front of a large, pink-walled residence with a yin yang symbol on the gate. The house is owned by Janey Harrington, who greets me at her door with her massive Rhodesian Ridgeback dog in tow.

Janey is an American who moved to Guiones about 11 years ago. She tells me that the molasses is a by-product of sugar cane production, and it's also an eco-friendly solution to the dust of the dry season.

And it is dusty. Most of the roads in this part of Costa Rica aren't paved. Everyone riding quad bikes and motorcycles here wears a mask or a scarf to avoid inhaling the dust.

“There is silica in the dust, and breathing that in is not good for you," Harrington explains. "So even though this is a beautiful place to be, it's something in dry season we have to deal with.” 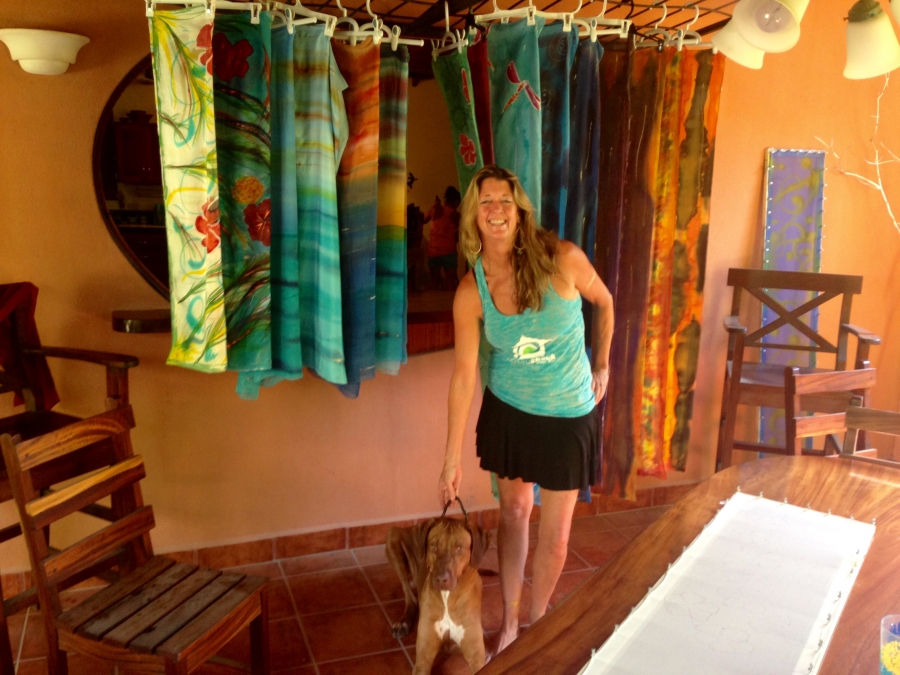 Janey Harrington and Obi in her home in Playa Guiones

So Harrington and her neighbors pay about $200 per property for Joaquin's crew to pour the molasses onto the road. The coating in front of her home will dry and harden in a couple of days, then last until the rains come in the spring. Molasses is water-soluble, and a strong rain washes it away.

As I walk back along the newly covered road, the fresh molasses cakes the bottom of my flip flops and the back of my legs. I guess I'll just have to soak my flip flops in the ocean to get rid of the goop.

It's okay, though. Surf's up, anyway.

Audra Sisson Vorapanya helped with translation for this story.