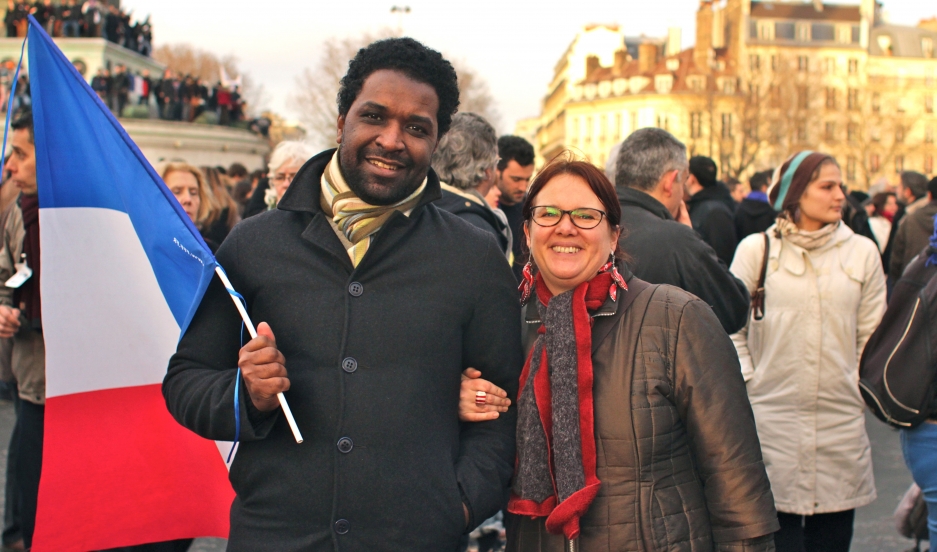 Paris couple Ahmed and Florence march hold the flag of France while participating in a march in support of freedom and people slain in the Charlie Hebdo terrorism attacks on January 12, 2015.

Sunday's enormous demonstrations weren't the only unsual sights across France in recent days. The French also deployed 10,000 troops to boost security around the country, half of them guarding synagogues and Jewish institutions.

It's another sign that life remains tense in France after last week's terrorist attack on Charlie Hebdo, a satirical French weekly. But the massive marches on Sunday, which the government said were the largest in French history, went off without incident.

“It’s hard to characterize the mood of a huge metropolis like Paris,” says The World's Leo Hornak, who's in Paris. “The city has still been kind of waking up from that — and there’s really the relief that nothing untoward happened.”

Hornak met up with a couple that live on the outskirts of Paris: Ahmed and Florence. Ahmed is Italian Egyptian and Muslim; Florence is a white French Christian. “They were determined to make their feelings felt about the horrible events we’ve had, and take part in the march,” he says. “And, of course, the rallying cry of that march was ‘Je Suis Charlie’ or ‘I am Charlie.’”

But Ahmed had a different rallying cry: I’m not Charlie. He doesn’t much care for the paper, saying people shouldn’t go after another person’s belief; there are plenty of other things to satirize. Yet he still participated in the march.

“I’m opposed to what happened,” Ahmed says. “If I have to choose between satirizing religion or making a terrorist attack against someone, I will choose the first road.”

Ahmed’s wife is in a different camp. “I am a good reader of the newspaper,” Florence says. “I’m a big fan. I’m a really, really big fan.”

Florence says it was less a decision and more an obligation to have attended the march. But when she arrived downtown, things were far from normal. There were thousands of people in the street, but all was silent. “It’s not the Paris we know,” she says.

Ahmed agreed. “You can hear anything except the voices of people,” he says. “Something is broken. You can see that in the faces of the people. Maybe it can be fixed later but at the moment something is broken.”