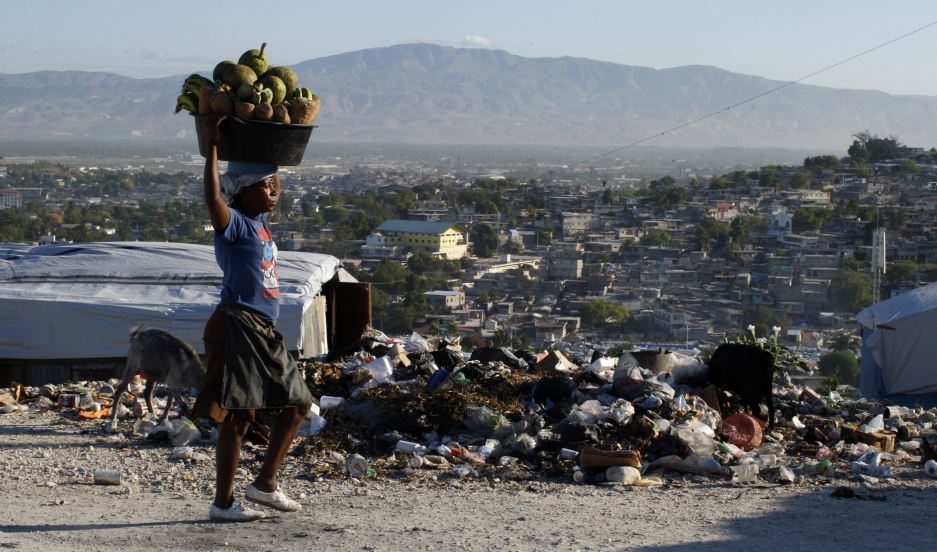 A Haitian woman carries produce to be sold in Port-au-Prince on March 15, 2011. An estimated three million people were affected by the earthquake in 2010.

In 2009, Laura Rose Wagner decided to go to Haiti to research her doctoral thesis. Just months later, in January 2010, a huge earthquake hit the country, forever changing lives across the island, including Wagner's.

Having lived in San Francisco, Wagner knew what to do when an earthquake hit. Still, she was shocked when the earth underneath her began shaking. "I was standing in the doorway when the house collapsed," she recalls. "I was very surprised that this was how I was going to die."

Wagner says she was trapped under the rubble for two to three hours. She survived after being rescued by friends and neighbors, but not unscathed. "My left arm was crushed," she says. "I couldn't walk very far very quickly."

She was evacuated to Miami and hospitalized to receive treatment on her arm. Wagner began writing about her experience, first in an autobiographical piece for Salon and then in other stories. A few months later, she went back to Haiti and started a writing group that brought together survivors.

Five years later, Wagner has published a new novel based on her experience, called "Hold Tight, Don't Let Go." The story is told in the the voice of Magdalie Jean Baptiste, a Haitian teenager.

"Adolescence itself is a time of uncertainty," Wagner says. "You're trying to figure out who you are ... who your people and community is. That's also what the post-earthquake was like. They were asking who they were as a community."

Magdalie loses her aunt, who's more like her own mother. Her cousin, Nadine, also a teenager, survives the quake. But post-earthquake life is rough for the two teenagers. They live in temporary tents and struggle with day-to-day survival.

Even with her personal eperience, Wagner feels she was in a position of "privilege" when it came to writing the novel. "I was close enough to be able to write credibly about it and not be incapacitated by it because it affected me," she says, "but absolutely not in the way it affected Haitian people in Haiti."