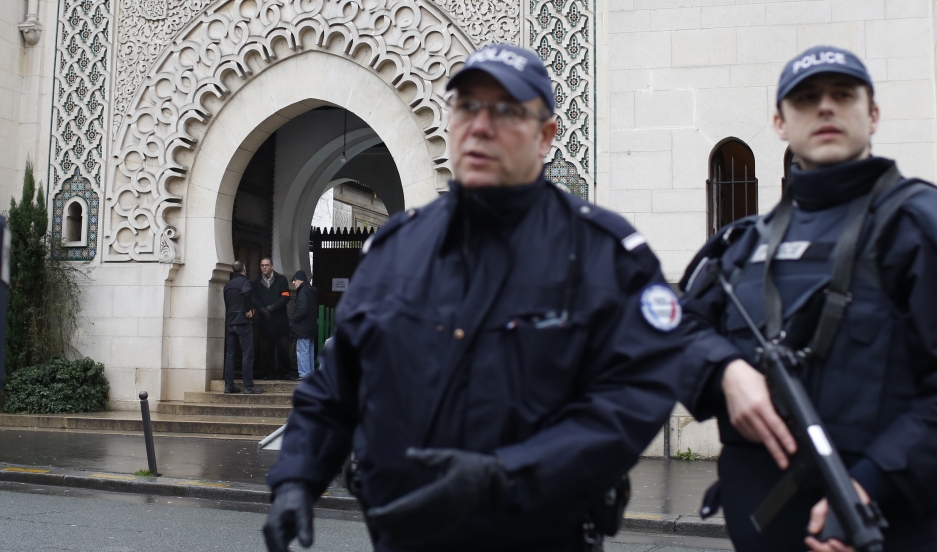 French police stand in front of the entrance of Paris Mosque as Muslims gather for Friday prayers in the French capital on January 9, 2014.

Said and Cherif Kouachi shared a fourth-floor apartment in Gennevilliers, on the northwestern outskirts of Paris. Across the hallway, their neighbors lived in fear.

“They’re going to come back and kill me for talking to you,” a middle-aged woman whispered to Mark MacKinnon, senior correspondent for Canada's Globe and Mail newspaper. MacKinnon was in Gennevilliers and speaking with neighbors of the Kouachi brothers, who are accused of attacking the offices of Charlie Hebdo on Wednesday and were killed in a shootout with police on Friday afternoon.

The woman MacKinnon spoke with is an immigrant from Tunisia, living with her older husband. They had been concerned about their neighbors for some time, MacKinnon says.

“They could hear them through the walls constantly reciting the Koran, which isn’t in and of itself remarkable,” he explains. But the couple eventually came to believe that the Kouachi brothers were extremists, and her husband decided to investigate further.

About two months ago, he and a plumber forced open the apartment door while the brothers were out shopping for groceries. When he went inside to have a look, the man’s wife told MacKinnon “they discovered ... a cache of arms. She didn’t know precisely what type of weapons they were."

But Said and Cherif returned home and caught the neighbor in their apartment. The woman said they threatened her husband, telling him not to tell authorities what he saw. “She demonstrated with her hands, [her husband] being shoved around, slammed against the fridge and threatened not to go to the police," MacKinnon says.

They didn’t go to the police.

MacKinnon says that speaks not only to the level of terror instilled in the couple, but also to the social breach between France’s Muslim community and the police service.

The head of the Muslim association in Gennevilliers told MacKinnon that relations with the police are not very good. A full day-and-a-half after Wednesday’s shooting in Paris, he says "the police hadn’t even been [there] to talk to those who knew the brothers at the mosque.”

One anecdote MacKinnon heard suggested the imam at the main mosque in the area had real trouble connecting with the Kouachis in the past.

Back in 2012, the imam gave a sermon in which he encouraged members of the congregation to vote in that year's presidential election. Said told the imam that he had no business telling Muslims to go out and vote. After a polite argument, MacKinnon said the brothers left and were seen less and less frequently at this particular mosque afterward.

“It gives you an idea of just how opposed they were to the integration of France’s Muslims into broader society,” he says.