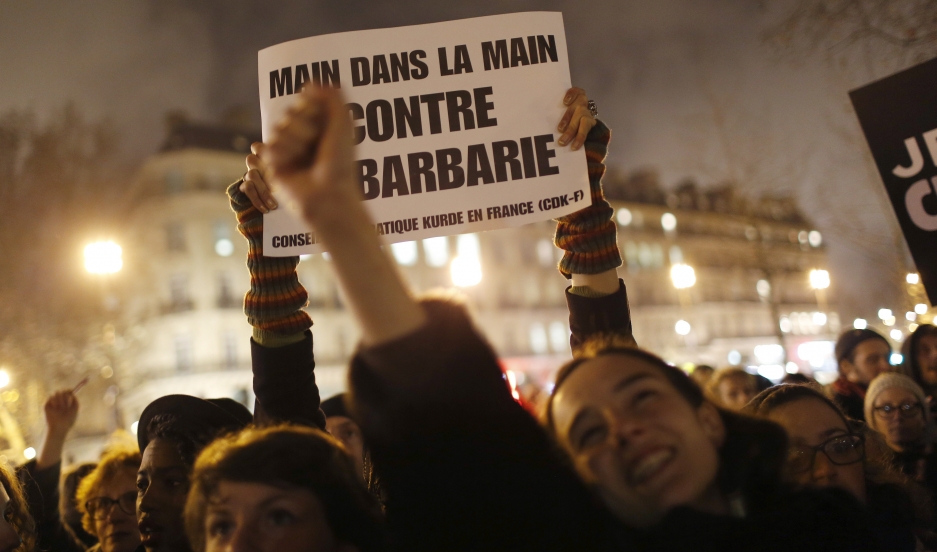 A woman holds a placard that reads, "Hand in hand against barbarity", during a vigil to pay tribute to the victims of a shooting by gunmen at the offices of weekly satirical magazine Charlie Hebdo in Paris, at Republique square January 7, 2015.

Born and raised in France, I grew up looking at covers of the satirical weekly Charlie Hebdo. I remember my older brothers guffawing behind its pages of vivid cartoons. I was not allowed to read it for a long time, as the magazine’s prose is definitely not child-friendly.

Over the years, I would occasionally leaf through the weekly at newstands, but rarely bought it because I often found its cartoons to be too vicious, or just too painful to look at.

Just to be clear, Charlie Hebdo is not The Onion, its mission it not to publish witty or whimsical stories — though it could be cruelly funny. Throughout its existence, Charlie Hebdo has been nothing if not controversial. With an unapologetic left-wing slant, it is often sexually explicit, and was deemed at times anti-Semitic, anti-Catholic, anti-Muslim, and the list goes on.

In November 2011, it unveiled a cover for one of its issues renamed "Charia Hebdo" (in reference to Sharia law) and joked it was edited by prophet Mahomet, depicted on the front cover as saying: "100 lashes of the whip if you don't die laughing."

Soon after, the offices of Charlie Hebdo were firebombed. The attack took place at night, so no one was hurt, but their offices were destroyed. That and other cartoons also landed editor Stéphane Charbonnier, known as Charb, on al-Qaeda’s ‘Wanted Dead or Alive’ list. He was one of the victims today.

I was a great admirer of two of its most prominent, talented and beloved political cartoonists, Jean Cabut (known as simply ‘Cabu’) and Georges Wolinsky. They created great comic book characters and collaborated with the magazine since its inception. Sadly, they were also killed today.

Charlie Hebdo appeared to be anti-everything, especially anti-religion. But if there was a harsh, crude joke to be made about anything or anybody, be they celebrities, the Pope, politicians, extremists, or the über-rich and powerful, Charlie Hebdo's cartoonists found it and nailed it. The magazine mocked power and thrived on absurdity; its covers were often criticized for being offensive and in poor taste.

Not everyone laughed. Today the staff paid a horrific price for their bold and merciless satire.

Many French people may have disliked Charlie Hebdo’s approach — I was not always a fan myself — but its 45 years of publishing (including a decade-long hiatus) embodies freedom of speech and freedom of the press. So I hope Charlie Hebdo can find a way forward in spite of this atrocious attack.

Tonight, in Paris and other cities across the world, there are demonstrations in support of Charlie Hebdo and freedom of the press. People gathered, carrying black signs reading "Je suis Charlie" or "I am Charlie."

The attackers reportedly claimed they had just killed Charlie Hebdo as they got away from its offices, leaving 12 people dead.