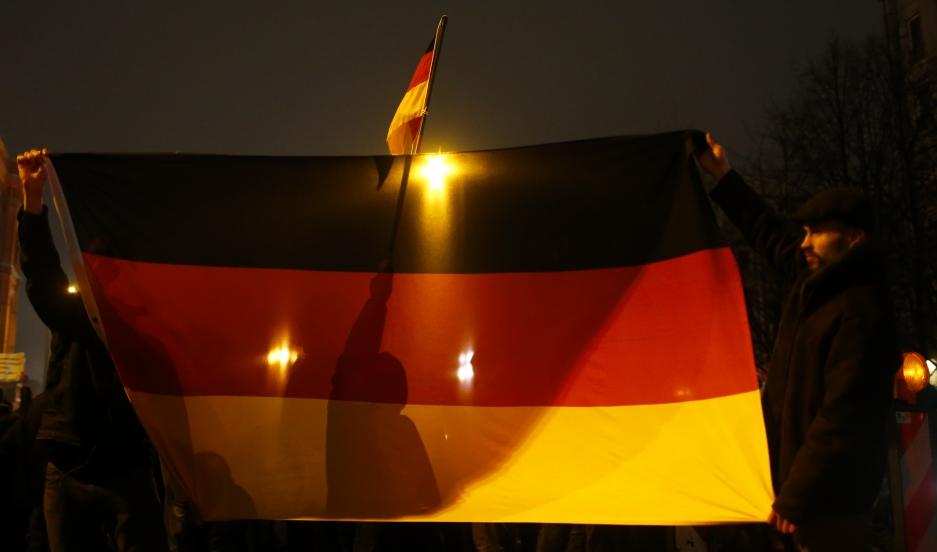 Participants in a grassroots anti-Muslim movement hold German flags during a demonstration in Berlin. The rise of the group, Patriotic Europeans Against the Islamisation of the West, has shaken Germany's political establishment.

Everyone wants to come to Germany.

That, at least, is the way some Germans see it. Germany is among the most prosperous countries in the world and, "after the United States, Germany has become the second most important destination country," according to the Organization for Economic Cooperation and Development.

Many of those immigrants are coming from war-torn countries like Syria and Turkey, which has become a sore spot in Germany. Every Monday night since October, an organization called Patriotic Europeans Against the Islamization of the West has organized anti-immigration marches. The latest edition attracted nearly 18,000 protesters in the city of Dresden.

The rallies have sparked counter-protests, with other Germans coming out to denounce the group and to speak in favor of the country's diversity and tolerance.

“On one hand, you have super liberals who say, 'Oh my God, the Nazis are taking over the country. We need to prevent this,'" says Timo Lochocki, a fellow with the Europe Program of the German Marshall Fund of the United States. "The others say, 'We're just afraid the country is turning out to be a horrible place for our children.'"

The protests are a major challenge for Prime Minister Angela Merkel, but George Packer of The New Yorker thinks she's moved more forcefully than on many other issues.

"She rarely sticks her head out and gets ahead of public opinion and shapes it," Packer says. "But on this issue, and one or two others, she's done so ... I think she just has a fundamental belief that for Germany to continue to be the success story it's been, it has to be open, it has to be tolerant, it needs immigrant workers."

Whether Merkel's example can carry weight — either in Germany or outside of it — is a matter of debate. Her center-right Christian Democratic Union has governed Germany in various coalitions for nine years, but her policies of austerity and limited bailouts haven't greatly improved the economies of European Union countries or Germany's own eastern areas.

"European economies are really ailing," Packer says. "And the trust and willingness to follow Merkel's lead around Europe is fading and with that, Germany's influence in Europe is going to be challenged in the coming year."

Lochocki says the German government could make one of two statements to quell the protests. It could point out that some of the anti-immigration protesters have "clear cut ties to right extremist parties, which are openly xenophobic and racist. These are not the guys you want to be affiliated with."