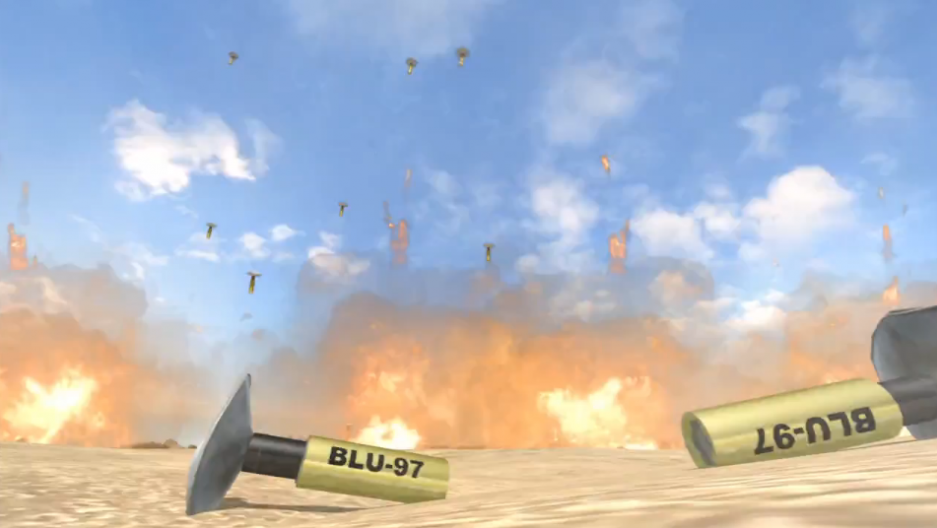 A cluster munition, or cluster bomb, is a canister filled with smaller explosives that can be launched on the ground or dropped from a plane. The submunitions clustered inside — call them "bomblets" — are each about the size of a soda can, and powerful enough to kill.

During Operation Desert Storm the US Air Force dropped more than 10,000 cluster bombs in Iraq. Cluster munitions were used again in Afghanistan more than a decade later, and then again in Iraq.

About 5 percent of the Desert Storm bomblets didn't detonate on impact, making them part of the deadly debris the US and other militaries have left behind in conflict zones around the world. In areas where the painstaking, expensive and risky business of demining hasn't yet been carried out, unsuspecting civilians often pay years later for the presence of this unexploded ordnance in the ground.

This animation shows you how cluster bombs work, and looks at one unintended reason why they've impacted civilians so hard.

For more on the impact of unexploded munitions on populations in Iraq, Cambodia, Ukraine and Mozambique, check out the Medill National Security Reporting Project's in-depth series, DEADLY DEBRIS — a three-month investigation by a team of grad students at Northwestern University's school of journalism that examines the deadly legacy of the United States' use of landmines and cluster bombs around the world, and its $3.2 billion effort to clean them up.