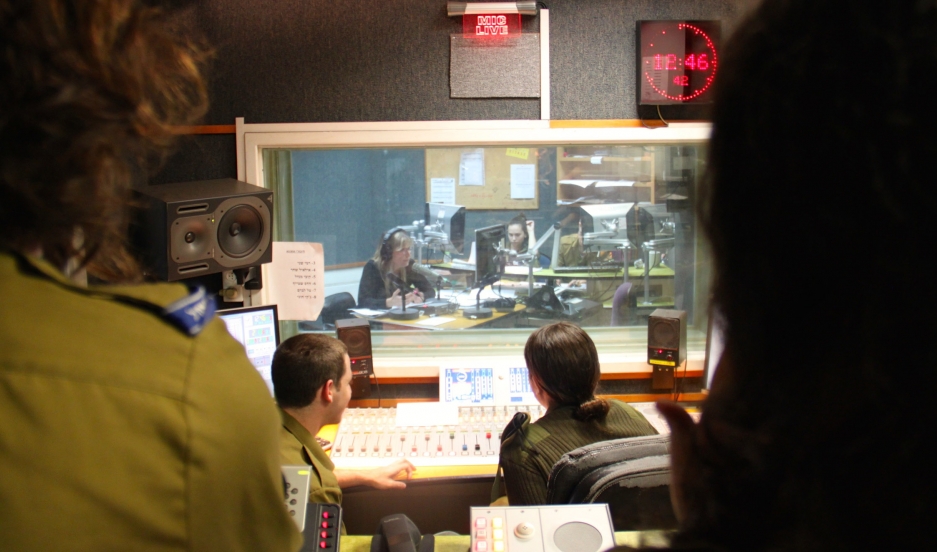 Imagine PRI’s The World being run by the military, with our journalists reporting the news in uniform and taking turns guarding the studio with guns over their shoulders.

If this seems like a satire on press censorship, it's reality in Israel: Army Radio is the biggest player on the country's airwaves. According to ratings reports, more Israelis listen to Army Radio’s offerings than anything else on the airwaves.

The American and British militaries both have radio networks for soldiers stationed overseas, but Israel is one of the only countries in the world with an army radio station broadcasting for civilians at home.

Entering the Army Radio studios requires you pass through a tall metal turnstyle, a kind of security checkpoint. “It’s an army base after all. Like, you can’t get in here for no reason,” says Omer Aloni, my tour guide, a 19-year-old soldier and producer for the early morning talk show.

Getting into Army Radio headquarters is tough for soldiers, too. Military service is mandatory for most Israelis, and there’s stiff competition to land a position at Army Radio. You have to pass a 100-question trivia test.

While the main anchors are all seasoned journalists, many of the news reporters are just kids in uniform. Ofri Eshel, for instance, is Army Radio’s foreign affairs correspondent — and just 20 years old.

If this were the US, these 18-, 19- and 20-year-old aspiring radio personalities would be working at small college stations, not reporting the news and playing tunes for an entire country. So how does a teenaged soldier break scoops, gather the news and explain what’s going on in Israel for a national radio audience? 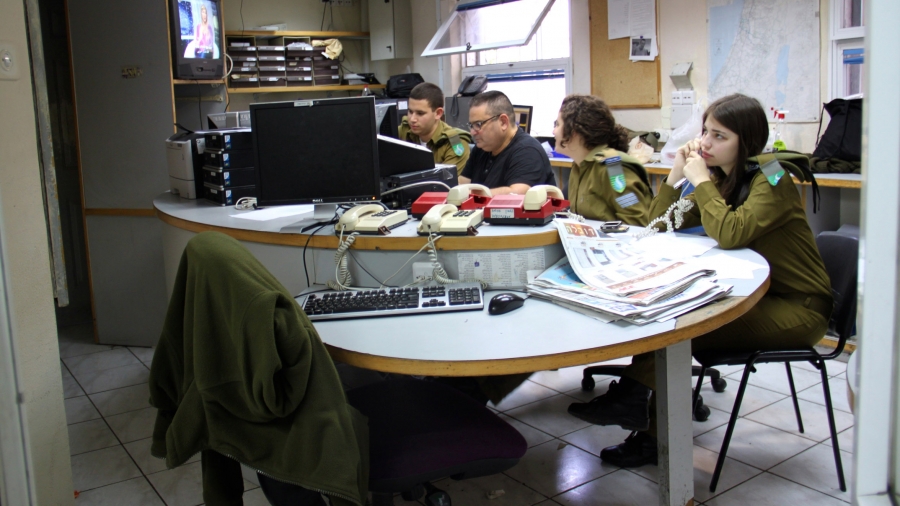 The offices may look like a college radio station, but this is Israeli Army Radio, the country's most popular purveyor of radio news and music.

“You need to ask the question, how can an 18-year-old fly an airplane?” said Dan Schori, deputy news editor. “If he can fly an airplane, he can probably bring scoops and bring news value for Galey Tzahal. That’s our value, that’s what we do and that’s how we work.”

The station’s editor in chief, Yaron Dekel, was appointed by the defense minister, and holds the rank of commander. “When I say that I am the editor-in-chief and commander of a radio station,” Dekel says, “in the democratic world, people can ask, 'What it is all about?'”

Dekel says his station is not a mouthpiece for the army, but a beacon of press freedom. He offers an example: Army Radio recently reported that Israel’s defense minister told some students at a West Bank settlement that Israel would do more settlement building once Obama was out of office.

It was a big scoop, broken by a 19-year-old soldier-journalist who got his hands on the tapes and played them on the air. Reporters in the US pressed the State Department about the matter.

Dekel says there are limits, like airing criticism of the army during a war; he says Army Radio would wait till the war ended.

Rather than explicit censorship, Oren Sofer, a media professor, says he thinks broadcasters at Army Radio employ a degree of self-censorship. But he says Israelis paradoxically trust the news coming out of the station precisely because it’s connected to the army. Remember, this is a country where most have served in uniform.

“The army station doesn’t really need to prove its loyalty,” Sofer said. “In a way, the affiliation of this station to the army is an advantage.”

Many of the soldiers at Army Radio go on to illustrious journalism careers. But this is still the army. Aloni, my 19-year-old tour guide, says soldiers take turns vacuuming the studios and grabbing an M16 for guard duty. A chores calendar is tacked up on a bulletin board in the hallway.

“Yeah, I’m actually here,” he says, pointing to his name. “Omer Aloni, January 21, I am going to clean the stairs. That’s being a soldier in Galey Zahal. ‘Cause after all, you’re a soldier, and they don’t let you forget it that easy.”

Cleaning the stairs, and attending the station’s Hanukkah party, are both required of soldiers. Station commander’s orders.