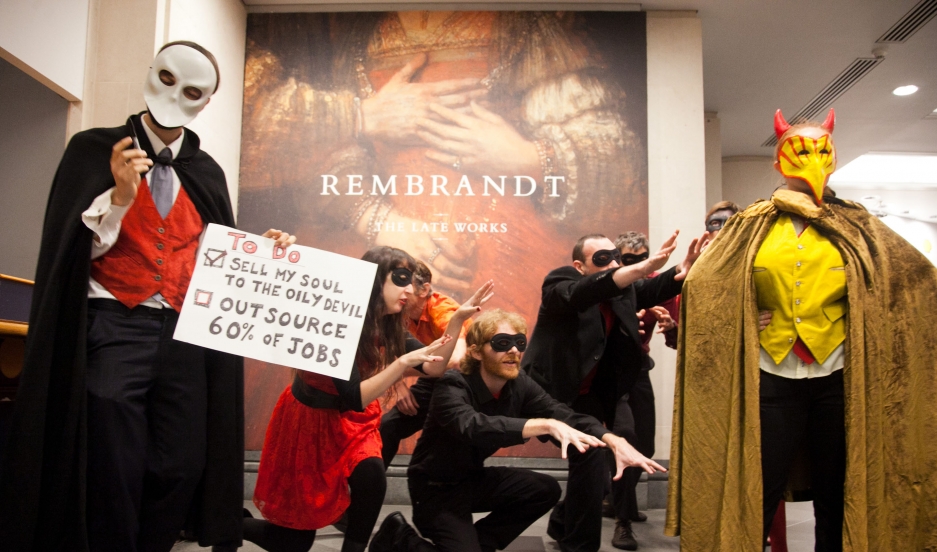 Britain's National Gallerly sells its soul to the villainous "Man from Shell" is this recent guerilla theater presentation by the activist group Art Not Oil. Fossil fuel industry support of cultural institutions has become increasingly controversial in the UK.

On a recent cold night in Trafalgar Square, a group of 30 or so people rehearsed a new piece of musical theater in front of Britain’s National Gallery of Art. But if the venue was highbrow, the production — including sinister characters and lyrics such as “A gallery of art-wash ... to benefit the oil boss” — definitely was not.

It was being staged by the environmental group Art Not Oil, and the target of their satire was a Rembrandt exhibition, sponsored by the oil and gas company Shell.

Much like institutional investments in fossil fuel companies in the US, funding from companies like Shell has become a contentious issue in the British art world. Museums and opera houses say they need the money to make ends meet these days, but groups like Art Not Oil believe sponsorship deals give fossil fuel companies a respectability they don’t deserve.

“These companies aren’t generous philanthropists,” says group member Chris Garrard, who led the guerilla theater production at the National Gallery. “They give very small donations in order to cleanse their image so we think they’re an integral part of society, when the opposite is true.”

The protesters draw a direct line between fossil fuels, climate change and widespread pollution. And their goal is to make taking money from fossil fuel companies as unacceptable for cultural institutions as it would be to get support from a tobacco company.

“Once people start becoming aware of the facts about climate, and we start exposing the kind of activities that these oil companies are involved in, then all of a sudden that has the potential to really damage the reputation of these institutions,” Garrard says.

Shell wouldn’t make anyone available for this story. The National Gallery sent an email saying it’s grateful for Shell’s support.

A few arts institutions in the UK have given up fossil fuel funding. But others, including the world-renowned Tate gallery of art, have resisted protesters’ demands.

“The Tate has been particularly secretive,” according to Anna Galkina of the arts and education organization Platform.

Platform wanted to know how much funding the Tate receives from BP. The company was behind the 2010 oil disaster in the Gulf of Mexico and its former CEO is now the chairman of the Tate’s board.

So Platform went to court to try to get the information, and last week Tate was ordered to disclose more information about its relationship with BP.

Again, neither BP nor the Tate would make anyone available for an interview.

Galkina believes the battle isn’t just about ill-gotten reputations. She says it’s also about the type of art museums will be willing to show.

“There have been recorded instances of actual censorship to do with sponsorship by oil companies,” Galkina says.“ The risk of taking more oil funding is the managers of arts organizations doing more self-censorship.”

And the pressure from environmentalists hasn’t been limited to arts institutions.

“We don’t think this is acceptable,” says Greenpeace’s Sara Ayech. “The reason Shell has this partnership [is] to make their brand look good and to build brand-recognition among children.”

Last year, Greenpeace set out to convince LEGO not to renew that partnership with a campaign that included an online video of an idyllic arctic landscape of polar bears, wolves and other wildlife, made entirely of LEGO bricks, being slowly inundated by an oil spill.

The video went viral with around 6 million views. 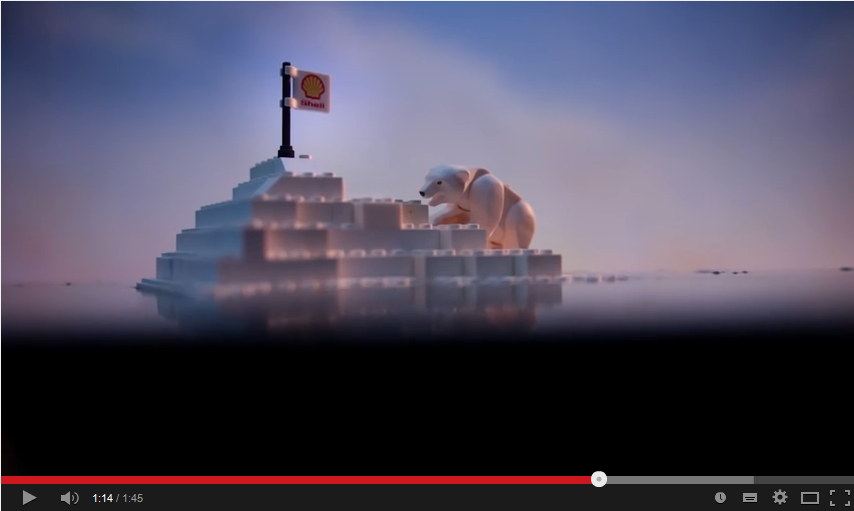 This 2014 Greenpeace video of an oil spill engulfing the Arctic was part of a successful campaign to get LEGO to cut its promotional ties to the oil company Shell.

At first, Ayech says, LEGO didn’t budge. But, she says “as the weeks went on and the pressure mounted, I think at that point a company has to make a decision about whether they will risk having their brand tarnished in the long term.”

LEGO also declined to make anyone available for an interview.

Ayech says she believes art museums can be convinced to follow LEGO’s example and cut their ties to fossil fuel companies.