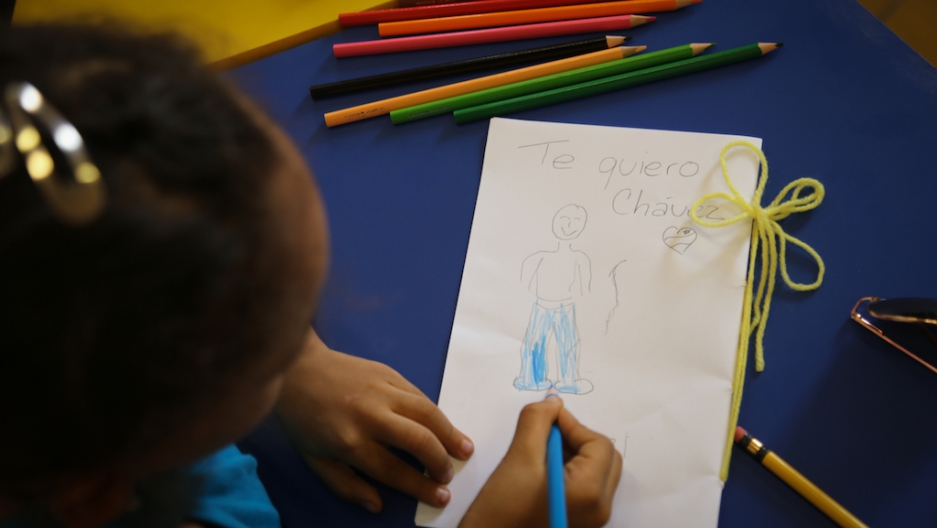 CARACAS, Venezuela — A couple dozen children sit in the courtyard of the Caracas military barracks where this country’s former President Hugo Chavez is buried.

Beside their parents, and soldiers clad in military fatigues and their distinctive red berets, the children cling to beautifully illustrated books telling the story of the man called “el Comandante.”

The workshop is run by the country’s Communications Ministry and aims to teach children about Venezuela’s president who died last year after leading the South American country for 14 years.

Critics decry the program as indoctrination, something that all involved deny.

In the sun, a troupe of actors plays out the events of Chavez’s life. It begins with his time selling his grandma’s spider-shaped papaya sweets in Sabaneta, where he was born. It follows him through childhood, to his love for baseball and then to his time in the military, his attempted coup and his presidency.

And at the end, when Chavez dies of cancer, the play speaks of his “flight to eternity.”

After mingling outside with proud, tearful parents and actors, the children walk into a makeshift classroom, in the barracks, decorated with their handprints under the sign, “Leave your handprint for the Comandante.”

Their task, set by teachers and supervised by soldiers and actors, is to fill a booklet with their own personal stories of Chavez. The illustrated books, which are to be distributed among state-run schools, are placed on tables alongside coloring pens, pencils and blank booklets to fill.

Iruani Arrechedera, 8, writes, “Chavez and me,” on her front page and draws a heart, colored with the Venezuelan yellow, blue and red. Another girl uses the same image and writes, “Chavez, I love you.”

The barracks are located in the 23 de enero neighborhood, a leftist stronghold on the west side of Caracas featuring murals of icons Ernesto “Che” Guevara, Karl Marx, Fidel Castro and Chavez himself on the walls.

The children, parents, actors and teachers then file into the room in which Chavez’s coffin sits, guarded by four soldiers and surrounded by an ornamental moat.

Arrechedera — who says she first knew of Chavez when she was in her mother’s womb — and her fellow students then read lines from their own stories. They are just feet from Chavez’s body. His legend is instilled in them.