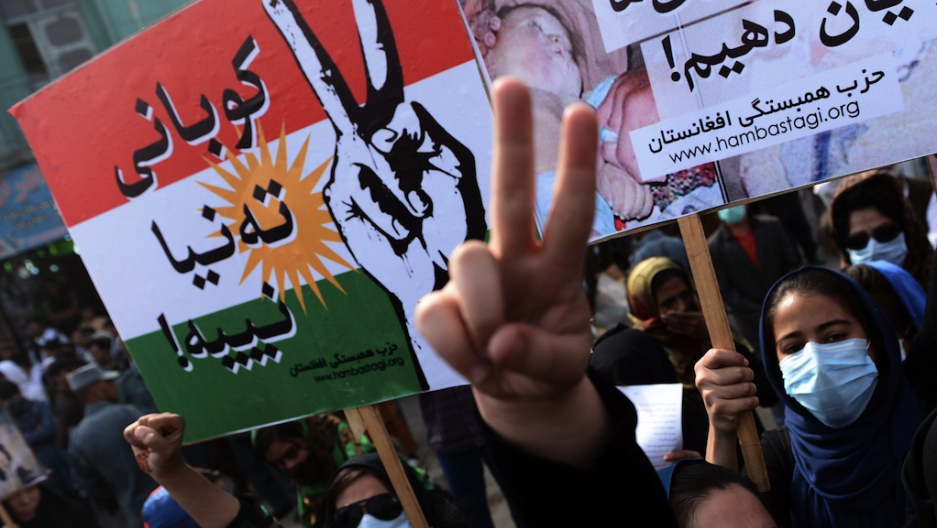 Afghan Solidarity members hold posters and chant slogans during a rally against the Islamic State group in Iraq and the US presence in Afghanistan, in Kabul, on Oct. 12.
Credit: Wakil Kohsar
Share

KABUL, Afghanistan — Propaganda pamphlets in Pakistan. Beheadings and black flags in the Afghan province of Ghazni. Graffiti on a wall here in the capital.

These are the vague, perhaps illusory traces of the Islamic State (IS) gaining a foothold in the region.

Everyone, it seems, has a tale: students embracing radicalism, or Taliban members forsaking their spiritual leader Mullah Omar. Most reports turn into smoke when pursued.

It’s harder to find Afghans who can speak firsthand of their loyalty to IS, also called ISIS or ISIL. But a former Taliban commander, Ibrahim Khorotai, assures GlobalPost that he and a small band of men have switched allegiances from Mullah Omar to Abu Bakr al-Baghdadi, the self-proclaimed Caliph Ibrahim of the equally self-proclaimed Islamic State, known in Afghanistan by its Arabic acronym, “Daesh.”

“I and many other [members of] fundamentalist Islamist movements have been waiting for an Islamic caliphate to emerge,” the bearded, 37-year-old former Taliban commander told GlobalPost. “With Daesh, Muslims now have a true government.”

As the United States-led war in Afghanistan officially ends, worries about the future loom large. Primary among the potential monsters lurking in the shadows is IS, which has made such a shambles of another war zone Washington had thought resolved.

More from GlobalPost: Meet the Yazidi family heading the fight against the Islamic State in Iraq

There is little evidence that Khorotai speaks for a significant group, and his words could be just bravado. But in the current atmosphere, any sign that IS may be gaining ground can cause shivers.

Khorotai’s professed change of heart offers a rare glimpse into the mindset of a previously committed Talib who claims to have hitched his own star to what is becoming the trendy IS bandwagon.

An empty police post outside Karachi, Pakistan, with graffiti that some are attributing to signs of a rising allegiance to Islamic State militants in the region.

The ex-Taliban commander is from the Charkh district of Logar, a small province in eastern Afghanistan, less than 50 miles from Kabul. He has a long history of fundamentalism, having completed his religious studies in a Peshawer madrassa, after which he returned to his home province under the Taliban. He remained in Logar after the American invasion sent many of his Taliban colleagues fleeing to Pakistan, and joined the anti-government insurgency.

A large number of his family members — those who have not been killed by NATO troops — are still with the Taliban.

But Ibrahim longs for what he sees as a purer form of Islam. He’s lost patience with the stasis in the fight between the Taliban and the foreign occupation. IS, at least, is getting results.

“We hope to see the implementation of the Caliphate’s laws in Afghan society,” he says. “Even right now hundreds of literate and brave Afghans are becoming ISIS supporters in the cities and villages.”

Sitting in a lush orchard of apple and apricot trees in Logar last summer, Ibrahim tried his best to convince reporters as well as fellow Taliban that IS was the way to go. Taking a large white Samsung Galaxy cell phone from the pocket of his vest, he showed his visitors videos of IS fighters shooting Syrian soldiers in the head. At every explosion he would laugh and yell “Allahu akbar!” ("God is great!").

Some seemed uncomfortable with this performance, but others were swept up in it. Ibrahim insists that the list of his supporters is growing by the day. While he may boast just a few dozen fighters at present, he claims there are close to 3,000 IS supporters throughout Afghanistan.

That is probably wishful thinking, according to Borhan Osman, a researcher with a Kabul-based nonprofit group called the Afghanistan Analysts Network. In a report released in November, he debunked many of the myths that have grown up around IS in Afghanistan.

One of the most terrifying was a widely reported incident in Ghazni province, in which “IS-allied militants” killed more than 100 people, beheading 15 and setting more than 60 houses ablaze.

This, according to Osman, was “enormously exaggerated.” Upon closer examination it boiled down to a sadly common event: a Taliban attack on several local Afghan police posts, in which the insurgents set fire to a few houses, and a dozen or so officers were killed. The reports of IS involvement were, Osman says, an “SOS message” from the police to prompt intervention from the national forces or the international troops. IS was nowhere to be seen, he insists.

Osman says other alarmist reports were similarly overblown, including an article in Foreign Policy magazine with the provocative title “ISIS makes inroads in Afghanistan, Pakistan.”

Its author, analyst Najib Sharifi, cites the Ghazni incident as evidence of the encroachment of IS.

He also quotes from a propaganda pamphlet of questionable origin. Called “Fatah,” it was published in Dari and Pashto and distributed in the border areas between Afghanistan and Pakistan, exhorting Afghans to pursue a path of “honor and liberty, or death with nobility and martyrdom.”

On Sept. 3, a Pakistani man holds a pamphlet, allegedly distributed by the Islamic State in the northwestern Pakistani city of Peshawar.

These materials mean little to most observers, however.

“It is not justifiable to conclude from such a limited and low-quality propaganda effort that IS is making inroads in Afghanistan and Pakistan,” Osman wrote.

But Osman acknowledges there is interest in the Islamic State among various layers of the Afghan public.

“Despite its lack of presence in Afghanistan, the spectacular rise of IS in Syria and Iraq and consequent global interest in the group has sparked widespread debate about its presence and possible future in Afghanistan,” he wrote. “IS is a globally interesting story and IS-related stories sell in the media at the moment. IS has a strong brand-recognition, so claiming membership or claiming the group is a threat might be useful for raising funds and profiles — whether one is in opposition or in government.”

In other words, using IS as a boogeyman may encourage the West, particularly the Americans, to stay engaged in Afghanistan, with the much-needed funding that attention normally brings.

It may be working. President Barack Obama has quietly expanded the post-2014 role for US troops in Afghanistan. Obama promised a finish to the combat mission by the end of the year, and officially, the NATO-led Resolute Support Mission starting in 2015 is non-combat. But last month the president issued an order giving US troops the ability to go after Taliban fighters who threaten them, and to again take part in joint raids with Afghan forces.

Outgoing Defense Secretary Chuck Hagel, on his last official trip to Afghanistan as Pentagon chief, told reporters that Washington would leave up to 10,800 troops in the country beyond 2014 — 1,000 more than originally planned — to ensure that Afghanistan does not go the same route as Iraq.

But both publicly and privately, US officials have downplayed the risks of IS in Afghanistan.

“[We] believe that the limited instances of support observed thus far appear to be the efforts of independent actors,” a senior State Department official said, speaking on background.

GlobalPost’s request for comment from the Afghan government went unanswered.

Most independent Afghanistan watchers shrug off the danger. The Taliban and IS, they say, are not the most natural of allies.

“Afghans are desperate for Western allies, and the ISIS brand keeps the aid and support flowing.”

“Afghans are desperate for Western allies, and the ISIS brand keeps the aid and support flowing,” said Anand Gopal, author of “No Good Men Among the Living,” a US National Book Award finalist. “But in terms of ideological compatibility, [the Taliban and IS] are quite different.”

The Afghan Taliban have always been more of a nationalist group, Gopal points out, restricting their activities to establishing rule in one country.

Belonging mainly to the Pashtun ethnic group, they’re also a bit leery of aligning themselves with Arab fundamentalists, given the way their last partnership turned out. It was Mullah Omar’s offer of sanctuary to Saudi millionaire and Al Qaeda leader Osama bin Laden that sparked the US-led intervention, ending the Taliban’s nearly six-year rule of Afghanistan.

“Arab groups have never really got much of a foothold in Afghanistan,” Gopal added.

But this does not mean that younger, more hotheaded Afghan insurgents will all turn their noses up at the IS brand.

“I would be willing to bet that if you talked to Taliban fighters on the ground, they would express approval of ISIS and their victories in the face of Western aggression,” said Gopal, who interviewed the Taliban extensively for his book. “But sentiment is very different from aligning yourself organizationally.”

This may be true. Even Ibrahim, the commander in Logar who describes himself as Daesh, says the connection is not yet formal.

“Daesh activities in Afghanistan are all informal so far,” he said.

“Some time ago an active member of Daesh arrived from London, and traveled to Kabul, Logar, Ghazni and Wardak provinces. We met him as well, but he did not have official sanction from Daesh leadership, which has not wanted to go into Taliban-controlled areas yet.”

The Taliban and IS are in a bit of a squabble over leadership: The Taliban’s Mullah Omar adopted the title “Amir al Momineen,” or “Commander of the Faithful,” and until now all Muslims were supposed to swear loyalty to him.

As Caliph Ibrahim, IS leader Baghdadi also claims the allegiance of all Muslims, and by some accounts is not too fond of his competition.

When IS declared a caliphate, the Taliban posted a message on its website calling for Muslim unity and to “avoid extremism of religion,” according to Reuters.

The website Vocativ reported that last summer, the IS head tried to persuade Al Qaeda chief Ayman al-Zawahiri to abandon his oath to Mullah Omar, calling the Taliban leader “an ignorant, illiterate warlord, unworthy of spiritual or political respect.”

The Taliban reportedly return the sentiment, announcing zero tolerance for anyone who recruits for or enlists with IS.

So far, it’s a standoff, which poses challenges to Ibrahim, the Taliban/IS commander in Logar.

“I hope that in the coming months the Taliban make their vision clear,” he said. “They either have to swear ‘bayat’ [oath] to Daesh or they have to oppose them. But for us, whatever Baghdadi tells us, we will do.”

Jean MacKenzie covered Afghanistan for GlobalPost from 2009 to 2011. She returned last fall for a two-month visit; this report is the result. Aziz Ahmad Tassal is a freelance journalist in Kabul.