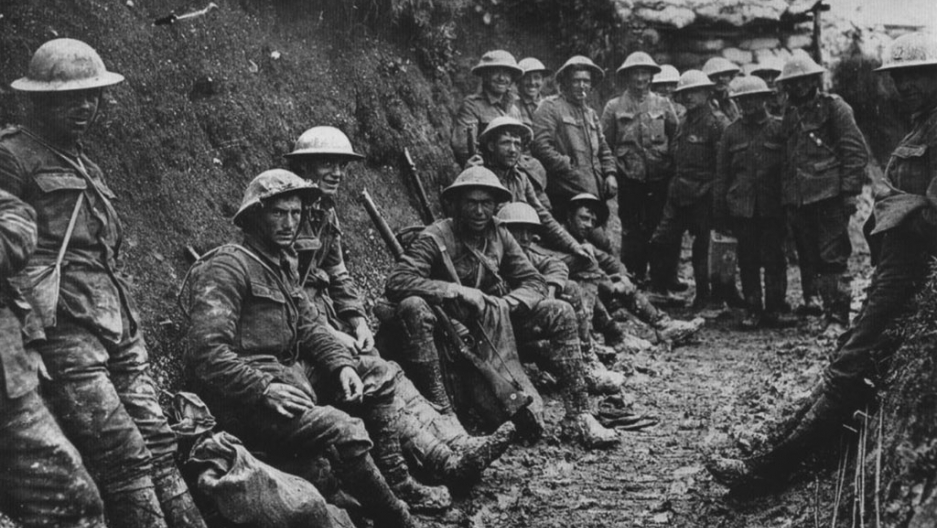 Infantry of the Royal Irish Rifles during the Battle of the Somme in World War I.
Credit: Public Domain
Share

BELFAST, Northern Ireland – Like shrapnel embedded in an old wound, memory eventually works its way to the surface.

And here the memory of World War I is painfully pushing through the skin of Ireland on the 100th anniversary of the conflict.

In the 26 counties of the Republic of Ireland and the six counties of Northern Ireland, a dialogue is unfolding that breaks a long silence about the fateful way in which the Great War reshaped the Emerald Isle and the world around it.

While the battles of World War I never touched the shores of Ireland, the war defined the course of Irish history and its desire for independence.

Gerard Diver of the Social Democratic and Labour Party, an Irish nationalist political party, said, “It’s a very complex and controversial history, and one that frankly just about all sides have tried to avoid. But it seems they can’t anymore. We can’t.”

Diver has, like many Irish people, explored his grandfather’s service in World War I. It's a piece of family history that Catholic families in particular have sought to sweep under the rug as service in the British forces was often viewed as somehow disloyal to the Irish nationalist cause.

“Maybe now we are ready for a real debate about the Great War and what it meant for us,” Diver added.

During the four years of fighting from 1914 to 1918, the Irish served and sacrificed in great numbers. They came from British military units known as the Royal Irish Fusiliers, the Royal Irish Dragoon Guards, the Dublin Rifles and dozens of other Irish regiments.

They were drawn in by the call to protect their homes and by the military pay at a time of great economic hardship across Ireland. All in, some 200,000 Irishmen served, 50,000 were killed and 150,000 more were wounded during the four years of fighting. The death toll matches the total number of Americans who died in Vietnam, but it must be remembered that Ireland was a country of only 2 million then and America was populated by more than 200 million people during Vietnam.

The simple white gravestones of these fallen Irish fighters stand in neat rows in war cemeteries in the rolling fields of France at the site of the Battle of the Somme, on the rocky hilltops of Jerusalem and the shores of Gallipoli.

At Messines Ridge in West Flanders, Belgium, Irish Catholics and Protestants from the north and south won a pivotal victory together.

At Frenzberg Ridge, they were slaughtered side by side.

Neil Richardson, author of the new book “A Coward if I Return, A Hero if I Fall: Stories of Irishmen in World War I” writes of a “collective amnesia” in Ireland about the war that has only very recently begun to give way to remembrance.

“The independent, republican Ireland of the post-War of Independence years had no place and no tolerance for those who had formerly served the crown, not unless they were willing to put their years of imperial service to good use by joining the Irish Republican Army, or the National (Free State) Army,” Richardson writes.

The Great War came on the heels of the British House of Commons’ vote in favor of Home Rule for Ireland. That vote would have created a new Irish parliament in 1914. But as war broke out, the Irish who supported Home Rule were asked to delay any dreams they had of a new parliament leading to independence.

It was a time of deep poverty in Ireland and the prospect of serving in the military, even under the crown, was one that many young Irishmen decided was worthwhile. Politically, some Irish leaders believed that serving in the British military was a way to prove that their goal was not to become an anti-British nation, but a new and independent nation that could be counted on as an ally.

Meanwhile, those who viewed the Home Rule plan with suspicion saw the British delay as evidence that it would never create any real liberty for the Irish to govern themselves.

The political tension over Home Rule would burn through the early years of the war and eventually explode in the Easter Uprising of 1916, a rebellion brutally suppressed by forces loyal to the crown. The embers would eventually ignite the Irish War of Independence from 1919 to 1921, out of which the Irish Free State was eventually born while the six counties of Ulster formed Northern Ireland and remained within the United Kingdom.

"The Troubles" of Northern Ireland would ignite again 1968 and roil with bloodshed until the 1998 Good Friday Agreement, which ultimately has brought about a power sharing government in Northern Ireland. There are still periodic spates of violence but the majority on all sides agree there is a steady momentum forward in Northern Ireland away from conflict and toward a better future.

In Belfast’s City Hall in the end of October, there was a gathering of the fifth annual Forum for Cities in Transition where delegates from divided societies including Northern Ireland, Israel/Palestine, the Balkans, Kosovo, Lebanon, Iraq and Nigeria gathered to share lessons learned on resolving conflict. In the grand, Edwardian-era foyer of the building, the delegates passed a statue commemorating the fallen of World War I.

Emerging out of the dialogue at this year’s forum was a striking historical trend. In these divided societies, the lines that shaped so many ethnic and religious conflicts were in most cases drawn during and after World War I. The Great War, it seems, has done much to shape contemporary conflict.

Padraig O’Malley, director of the Forum for Cities in Transition and a professor at the University of Massachusetts, Boston, said, “It’s very important to understand World War I. Lines were drawn without consideration of ethnicity and religion. They thought of lines of strategic interest that were carved by the British and the French without the concern for the local people. And with the hindsight of history it is safe to say that has all backfired.“

Over the next two years, there were will be several key centennials coinciding, including the 100th anniversary of the Easter Uprising of 1916 and the epic Battle of the Somme which began on July 1, 1916.

The anniversaries will present a unique opportunity for reflection across Ireland, said Derry councilman Diver, who was also a delegate at the Forum for Cities in Transition.

Diver wrote a long piece for the Derry Journal on his relatives who served in the Great War, including his grandfather, Willie, and his brother, John, who was killed in action in France.

“Over the coming year we have a chance to revisit our own history and the ways in which that history was shaped by the war," he said. "I just hope we really take the time to do it, and don’t end up forgetting. We need to understand it, so we can keep moving forward.”