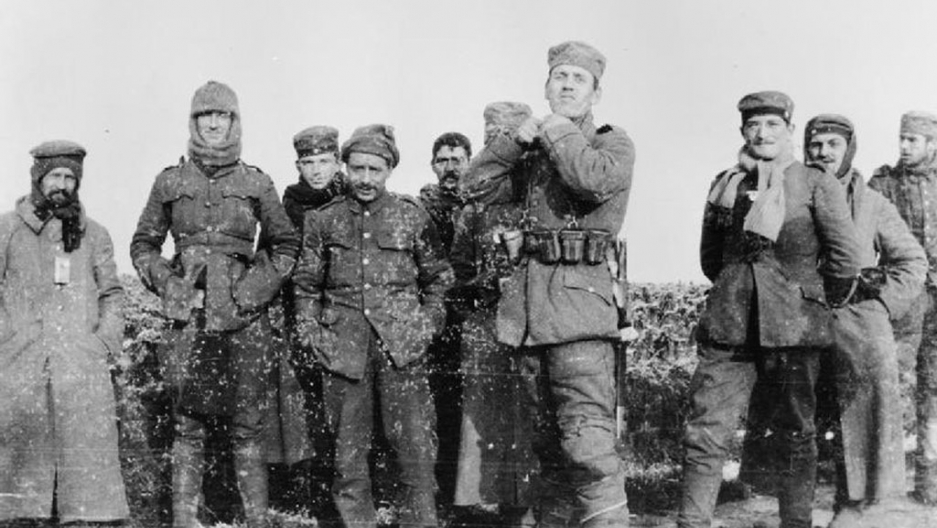 During the Christmas truce 1914, German soldiers of the 134th Saxon Regiment were photographed with men of the Royal Warwickshire Regiment in no man's land on the Western Front.
Share

One hundred years ago today, the cold, wet and shattered troops that faced each other in the trenches of World War I made a few brave, halting steps toward peace. It became known as the Christmas truce.

The fabled story of that brief laying down of arms is a resonant one that seems to hold lessons for today, even if the relatively small conflicts and insurgencies that engulf this world seem vastly different from the static trench lines that defined the Great War.

Many historians, particularly Christopher Clark in his powerful new book “The Sleepwalkers: How Europe Went to War in 1914,” compare the geo-political terrain today to the events that led up to the outbreak of the First World War. Other historians are quick to point out the vast differences between the US-led counterinsurgency strategies of Iraq and Afghanistan today and the conventional warfare that brought the world to war between 1914 and 1918.

So how do we look at an event as courtly as the Christmas truce in the age of terrorism? What does it mean in an era when there are no clear front lines to the fighting, when bombings and drone attacks alike put civilians directly in the conflict and when asymmetrical warfare, to use the military parlance, provokes disproportionate response?

I reached out to him because his scholarship and his counsel earlier this year helped us shape a year-long reporting effort titled “The Eleventh Hour: Unlearned Lessons of World War I.”

Hochschild, who has focused on the quiet voices of dissenters of World War I, many of whom were jailed for their stand against the war, said he resists glorifying the limited Christmas truce.

He is quick to point out that it fell apart and that soon after the great horrors of what was at the time dubbed “the war to end all wars” would follow.

Within months the front lines would see gas attacks with plumes of poisonous gas flowing across the fields and seeping down into the trenches. Flamethrowers would become part of an evil arsenal of both sides and transform the battlefield. And German Zeppelins would soon be dropping bombs over London neighborhoods, killing civilians indiscriminately.

Despite the failure of the truce, Hochschild believes there is still something meaningful in exploring the motivations that led German and British soldiers to take the risk to extend their hand across the trenches.

“The Christmas truce was about individuals standing up, and reaching out across the divide and we don’t see much of that today. Frankly, we need more of it. We need to ask ourselves what this truce means and why it is so resonant in history,” Hochschild said.

The Christmas truce came in the first year of the war, December 1914, when the trench lines of the Western Front near the Ypres Salient brought enemy troops into such close contact that enemy soldiers could literally hear each other across the muddy, cratered fields littered with the dead from both sides.

And in the early days of December, the British and German soldiers worked out an agreement among men to bury their dead. Then they agreed to allow each side to retrieve water.

That’s how the truce began to take shape, with soldiers recognizing very human, practical needs. There were no high orders from officers or formal agreements crafted by diplomats. In early December, Pope Benedict XV began an initiative, requesting that the nations "cease the clang of arms while Christendom celebrates the Feast of the World's Redemption." But this effort faltered.

British General Sir Horace Smith-Dorrien, for one, wanted no part of it, and he issued this instruction to commanders of all divisions:

"Experience of this and of every other war proves undoubtedly that troops in trenches in close proximity to the enemy slide very easily, if permitted to do so, into a "live and let live" theory of life... Such an attitude is, however, most dangerous for it discourages initiative in commanders and destroys the offensive spirit in all ranks...the Corps Commander therefore directs Divisional Commanders to impress on subordinate commanders the absolute necessity of encouraging offensive spirit... friendly intercourse with the enemy, unofficial armistices, however tempting and amusing they may be, are absolutely prohibited."

Despite the failed pleadings of the pope and the stern admonition of the British command, the soldiers did what they thought was right.

In the end of the day, it was just about men who were tired of war agreeing to stop, at least for a while. Christmas trees with candles began to appear on the parapet of the trenches. Eventually, soldiers on both sides of the front lines could be heard singing Christmas hymns in unison in the dead of night.

And then a brave few ventured out to greet each other and the British and German soldiers began to share tobacco and, by some historians’ accounts, a soccer match broke out using a ball made of cloth and hay.

This month, the Christmas truce is being commemorated in Europe and in pockets of remembrance around the world. There was the unveiling of a new statue in a field in Belgium that is purportedly where the soccer match occurred.

And there were reenactments of the truce near St. Yves. British Royal Marines gave a concert at Ploegsteer Church. And there was a soccer match in Haifa, Israel last week that brought together Jews, Muslims and Christians from both sides of the Israeli/Palestinian divide as a way to commemorate the spirit of the truce.

So how do we remember the “truce” now and what lessons, if any, does it hold for a world that feels to some observers as if it is descending into a global war that has no such clear lines of conflict?

Historians of the Great War agree that the Christmas truce was a last gasp of a courtly sense of ‘honor’ in war in which men — even enemies — dared to see each other through their shared humanity, and in this instance through their shared faith. That shared experience was brief. Both sides promptly returned to killing each other.

The truce seems to resonate through history mostly because it reveals the absurdity of war, the brief recognition of the futility of killing each other and a human desire to try to put a stop to it.

Tufts University’s Leila Tarazi Fawaz, who has just published a powerful and lyrical book titled “A Land of Aching Hearts: The Middle East in the Great War,” reminds readers that war is always about people. She tells the stories of ordinary men and women, along with how the sweeping events of the war affected their lives and changed the course of history, particularly in the Middle East.

The people of the crumbling Ottoman Empire, in what is today Syria, Lebanon, Jordan, Israel and Palestine as well as Iraq and Turkey, suffered famine, disease, inflation and an influx of refugees during World War I, as Fawaz writes in her social history.

And the lines that were drawn during and after the conflict carved out a new Middle East and a new political reality that Fawaz says “are so much a part of all of the conflict we are seeing in the news today.”

I recently had dinner with Fawaz and a chance to reflect with her on the book and how to look at the Great War today.

As she put it so well, “War is always about people, about the small people who suffer under it. And it is also about the individuals who perhaps were willing to stand up and to speak out. When we think about war we have to think about individuals, people. They are always the ones who lose.“

Fawaz writes about this in the concluding chapter of her book, remarking “the trenches of World War I are replaced by the drones of 2014.”

“What is beyond doubt is that the unnamed heroes did what they could to survive difficult times and that their legacy will continue,” she continues in the book. “Historians just need to be attentive to their sometimes muffled voices and, in this way, ensure that they can still be heard, not entirely silenced by the drumbeats of war.”