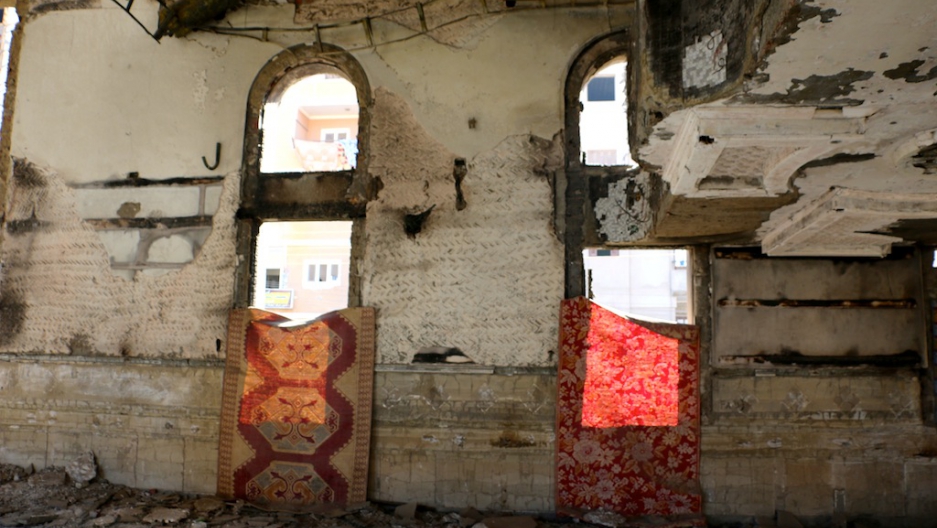 The burned-out Anba Moussa church in Minya has not been rebuilt since it was attacked 16 months ago.
Credit: Laura Dean
Share

MINYA, Egypt — It’s early, just before 7 a.m. Elderly ladies with elegantly coiffed hair shuffle toward the Amir Tadros church. The towers are ringed with scaffolding, and a makeshift fence of wooden boards seals off the church entrance except when it’s prayer time. On one side there’s a yawning hole in the ground where the foundation is being rebuilt.

Exactly 16 months ago here, as news flowed in of the bloody dispersal of sit-ins in Cairo that left more than 800 supporters of ousted Muslim Brotherhood President Mohamed Morsi dead, angry mobs in this Upper Egyptian city took to the street and attacked churches, shops and other Christian-run establishments.

The same thing happened around the country. Dozens of Christian institutions were looted and burned, with residents blaming Islamists from nearby villages for most of the attacks. Christians, who make up roughly 10 percent of the Egyptian population, were seen as supporting the military coup that ousted Islamist President Morsi a month earlier and targeted many of his supporters. Sectarian rhetoric at pro-Morsi sit-ins in Cairo had for weeks accused Coptic Christians of supporting Morsi’s July 3 overthrow.

The government used the August church burnings, particularly in Minya — which has a large Coptic population and saw some of the worst attacks — to justify the heavy security crackdown that followed.

But that iron fist did little to help Christians who’d been targeted. Their churches, which the army promised to fix more than a year ago, still stand half-built as Minya’s Copts prepare for another drafty Christmas.

Carpets cover the bare cement on the partially rebuilt ground floor of the Amir Tadros Church. Parishioners shiver in their seats and leave their coats on during the services. A mother wraps her young son inside the sweater she’s wearing to keep him warm.

Despite the chill, the church is packed, men on one side, women on the other. It is the first Sunday of Advent, the season leading up to Christmas, which for Egypt’s Coptic Christians falls on Jan. 7. Some have been here all night.

The service is an ancient affair, involving incense, cymbals and hymns sung in Coptic and Arabic. Coptic is the latest form of the language spoken in pharaonic Egypt.
Amir Tadros parishioners remove their shoes to approach the altar and take communion. There are no windows in the structure yet and the building is open to the chilly winter air.
Women take communion in the partially rebuilt Amir Tadros church.

Coptic Christians pray during a service on the first Sunday in Advent in a partially rebuilt church in #Minya, #Egypt. Women sit on one side of the church, men on the other.

For this congregation, it’s been a tough year and a half. On the night of Aug. 14, 2013, the night her church was attacked, parishioner Nora Girgis says she came down from her house to try to stop the arsonists. One of the attackers drew his finger across his throat in an ugly threat, she says.

“The wood was like cigarette paper,” says Father Sidarous Macca, describing the carvings in the main hall of the church that were set alight.

“We prayed in the church garden for about three months, then in a nearby school for six. Then when the school needed the space we prayed in a house,” he says.

The main floor of the church is still in ruins, but worshippers can now use the partially finished ground floor. There are still gaping holes where the windows should be.

The army’s work to rebuild the churches has been slow. Even the help they do provide is partial. (Military representatives didn't immediately respond to a request for comment.)

The Amir Tadros church is partially rebuilt after it was burned in August 2013. The army paid for the steel and the cement but the church had to pay for the rest, including the red bricks and the workers' salaries.

“The armed forces provide only the steel and the cement,” Father Sidarous says. Everything else — the workers’ salaries, the red bricks piled on the street outside — is paid for by the church. He hopes the repairs will be finished by Easter.

Still, the Amir Tadros congregation is luckier than some.

Across town stands the charred shell of the Anba Moussa church. Nothing has been moved since the day a mob burned and looted the church and the priest’s apartment. They took everything, down to the doorframes and the toilet seats, after driving a car through the front doors. Only an ever-thickening layer of dust attests to the passage of time.

“They say the army will come, but up to now we haven’t seen anything,” says Atteya Farag, the church’s caretaker.

What remains in the looted apartment of the Anba Moussa priest sits under months' worth of dust more than a year after it was raided.

The remains of an image of Christ in the charred shell of the Anba Moussa church in #Minya, #Egypt, 16 months after it was burned, allegedly by Islamists, following the violent dispersal of pro-Morsi protests in #Cairo that left over 1000 dead. The armed forces said they would rebuild the churches but parishioners here are still waiting.

In Minya, everyone is on the margins

Here in Upper Egypt, it’s not only Christians who feel forgotten. In fact, Muslims and Christians have lived together here for hundreds of years. Both groups contend with high rates of unemployment and limited resources supplied by the central government.

34-year-old Mohamed Ali, a Muslim construction worker, is one of about two dozen men carrying out repairs on the Amir Tadros church.

Usually there are both Christian and Muslim workers, says Father Sidarous.

“Today is Sunday and the Christians didn’t come today because today they pray,” says Ali.

“We are like brothers,” he says of his Christian colleagues.

Father Sidarous says many of his Muslim neighbors were upset at the church burnings last year and offered to give money for reconstruction.

Father Sidarous has done a lot of interfaith work and counts many Muslim religious leaders among his friends. “They call me the priest of the Muslims and the Christians,” he says. “I have Muslim friends here who say when their daughters get married, if Father Sidarous doesn’t come, I won’t write a word,” referring to the Muslim marriage contract signed by a male witness from each family.

But Nady Khalil, director of Christian NGO Integral Development Action of Minya, says Christians in particular are swayed by the government’s rhetoric that Egypt is “fighting terrorism,” mainly referring to Islamists.

“We are educated by fear,” he says.

“Christians have a lot of fear, and it’s not always warranted. It’s very linked to security. When there is pressure on normal Egyptians there is a bit more on Christians,” he adds. Indeed, attacks on Copts in Egypt are not new.

Many Christians who spoke with GlobalPost said they felt less safe under the Muslim Brotherhood government than under the current regime.

Last August, the police failed to respond to numerous distress calls from churches across Minya province. The police stations themselves were under attack. But many feel that the military — which often plays a law enforcement role in Egypt —  should have anticipated the attacks and secured the churches in advance. After all, there had already been a church burning in Minya more than a month earlier, just after Morsi was ousted.

“For weeks, everyone could see these attacks coming, with Muslim Brotherhood members accusing Coptic Christians of a role in Mohammad Morsi’s ouster, but the authorities did little or nothing to prevent them,” Joe Stork of Human Rights Watch said at the time.

It took several days for the army to arrive in Minya.

“For three days [the looters] were selling things in the street and people from the church were buying them back,” says Christian NGO director Khalil.

He contends that the Hosni Mubarak regime used the same tactic: allowing violence to go on so that there’s a pretense for cracking down later. “It’s part of the game. They want a reason to make people afraid, to have a reason to come back.”

“For a long time churches have been under threat, you always hear about this church or that church being attacked, before the time of the Muslim Brotherhood, at the time of Mubarak,” says Farag, the Anba Moussa caretaker. “They allowed these things to happen.”

Now, Khalil says, it feels like the Mubarak-era state has returned stronger than ever.

“In 2011 and 2012 we felt that an ordinary Egyptian was stronger than the state, that no one would bow down again. Now those who do not bow down …” — he draws his finger across his throat.

“A generation of youth lived a year of breathing freely, a year when they could say the words they had never said, ‘freedom, human dignity.’ Those youth tasted something beautiful but the state didn’t change.”

Alter boy in a partially rebuilt church in #Minya, #Egypt on the first Sunday of Advent. A parishioner asked me to stop photographing the alter boys playing during the service, as though that doesn't happen everywhere.