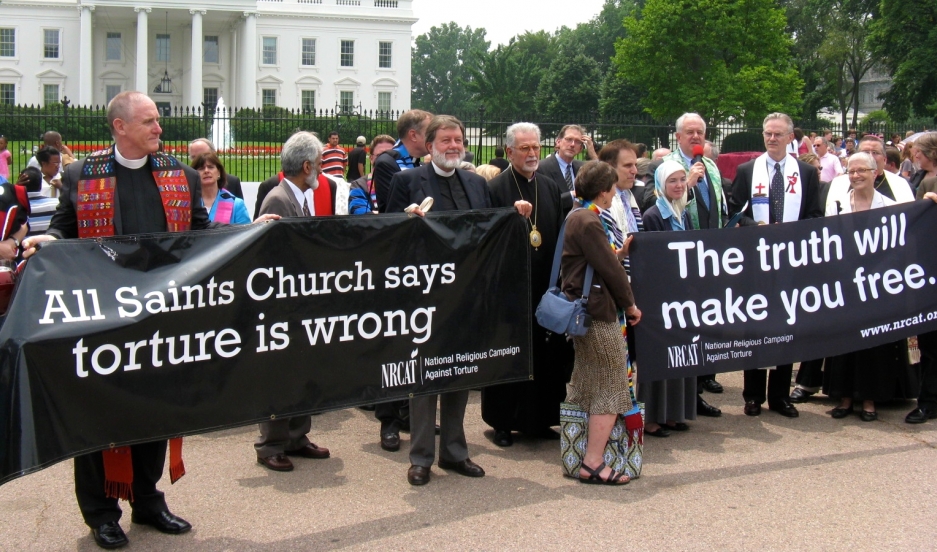 Supporters of the National Religious Campaign Against Torture attended a rally outside the White House in 2009.

Courtesy of the National Religious Campaign Against Torture

When reports about abuse at the Abu Ghraib prison first came out more than a decade ago, Michael Peppard started researching every account of mistreatment and torture he could find. He soon noticed a pattern missed by most journalists: American interrogators were using the religious faith of Muslim detainees as a weapon to abuse them.

“One of the ex-detainees described 'forced prostration before an idol shrine,'” says Peppard, an assistant professor of theology at Fordham University.

He included the claim in an article he was working on at the time, but he also wrote that he had doubts such practices were being carried out by US personnel. Those doubts proved wrong. “Lo and behold, in the Senate Armed Services Committee report in 2009, there it was: 'forced prostration before an idol shrine,'” Peppard says.

The most common example of religiously themed abuse was the desecration of Korans. The average non-Muslim might not think that should rise to the level of torture, but Peppard points out that Muslims consider their holy book divine in nature.

That’s why accounts from ex-detainees about Korans being ripped up, kicked or tossed into a bucket of excrement were widely perceived by Muslims as grave violations. “Many [former prisoners] were referring to religiously themed abuses as the most affecting and awful part of their experience [in US detention],” Peppard says.

As for the latest Senate report on CIA abuse, Peppard says it doesn’t mention practices that hadn’t come to light before. But Peppard, who has written about his findings at Commonweal Magazine, said the latest report suggests that using religion to force detainees into cooperation was part of a deliberate US policy.

“If this was an actual policy of interrogators, to create a burden so great that a person's religious faith would be destroyed, that sounded to me like the exact opposite of what I believe our country ought to be representing in its first and greatest liberty,” Peppard says.

According to James Yee, who was the US Army Muslim chaplain at Guantanamo Bay in 2002 and 2003, religious persecution against prisoners at the facility “was very widespread.”

In addition to desecrating Korans, Yee says there was misuse of religious symbols, including the Star of David, which is found on the Israeli flag. “[The flag] was used to try and incite the prisoner when it was wrapped around the shackled detainee in an interrogation room,” he says.

Yee described a sense that the Geneva Conventions did not apply at the US military detention center, that “the gloves were off,” and that any Muslim could be a target.

Yee himself was charged with aiding the enemy in relation to his work with Guantanamo prisoners in 2003. He spent two-and-a-half months in solitary confinement before the charges against him were dropped in early 2004.

Marisa Egerstrom, a doctoral candidate at Harvard who's writing about the history of torture, says cases of religious abuse should be particularly abhorrent to Christian Americans.

“There is nothing about being a Christian that gives any sort of defense for that abuse and manipulation of other people's relationship to the divine,” says Egerstrom, who also working toward ordination in the Episcopal Church.

Joe Carter, with the Ethics and Religious Liberty Commission of the Southern Baptist Convention, has written forcefully against the practice of torture following the September 11th attacks. "I think that’s kind of sad that the would put their nationalistic, security issues above the gospel of Jesus," he says. “You corrode your own soul by infecting it with cruelty and disregard for humanity and disregard for the image of God in another person.”

But a recent Washington Post-ABC News poll indicates that many Christians, along with the broader American public, feel otherwise. A solid majority of respondents who identified themselves as Christian said that CIA treatment of terrorist suspects was often or sometimes justified.

Peppard, a practicing Catholic, thinks it's not clear why so many of his fellow believers feel that way. “It is deeply ironic, paradoxical and troubling," he says, "that those who worship Jesus Christ, who was tortured and executed by state power, would support the torture of anyone."