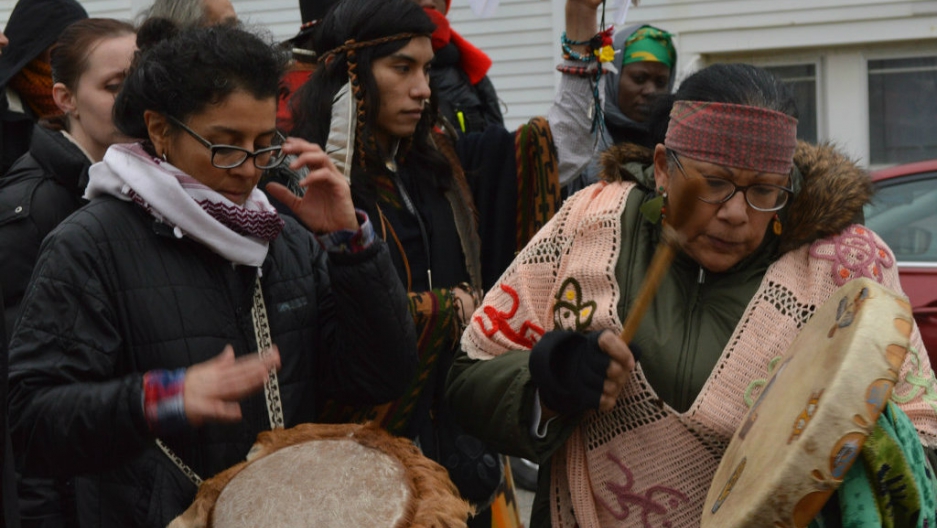 PLYMOUTH, Mass. — It’s Thanksgiving morning at Plymouth Rock. A scattering of tourists and families stroll around the harbor, congregating at the landmark Pilgrims claim to have noted upon their arrival to Plymouth in 1620. Opposite this national landmark is Cole’s Hill, a grassy park where a majestic statue of Massasoit, the Wampanoag chief who welcomed the Pilgrims, towers above the rock, harbor and tourists below.

But for the United American Indians of New England (UAINE) and many other Native people across the United States, this is actually a National Day of Mourning. Since 1970, UNAINE has hosted a protest and rally here for those who do not see Thanksgiving as a time for celebration. Instead, this alternative event gives Native people and their supporters a chance to draw attention to the ongoing struggle for indigenous rights in America, along with related rights movements in the US and around the world.

Moonaum James, one of the event’s organizers and a descendent of the Wampanoag, addressed about 200 people crowded around Massasoit’s statute. Assorted flags and banners whipped in the wind while a few individuals waved branches of incense, wafting a smoky, perfumed scent through the crowd.

“Many times we have been asked what is the true history of Thanksgiving,” James intoned. “This comes as no surprise; the truth has been buried for 395 years … Upon arriving, the Pilgrims opened my ancestors’ graves and took as much as they could carry of their corn and bean supplies. Massasoit, the great Sachem of the Wampanoag, knew of this, yet he and his people welcomed and befriended the settlers, saving them from extinction, little knowing how many Wampanoag and other Indians would be killed by their guns or diseases.”

As fervently as American Indians have fought to protect their property, corporate interests have tended to override environmental concerns. In Western Canada, abundant oil deposits in the Athabasca tar sands have driven a growing surface mining industry, despite findings that oil sands production releases toxic pollutants into the air, soil and water. First Nation members in Western Canada have reported increased levels of sickness in their communities, and have been forced to change eating habits to avoid contamination.

“The first National Day of Mourning in 1970 was a powerful demonstration of Native unity,” Moonaum said to his audience, who appeared to be a mix of American Indians and participants of various ethnic backgrounds. “Today is a powerful demonstration of not only Native unity, but the unity of all people who want the truth to be told, and an end to the oppressive system that was brought to these shores by the pilgrim invaders.”

Juan Gonzalez, representing the Council of Mayan Elders, also took the stage. The crowd grew chilly, but remained huddled together and focused on the elder.

“It’s the big internationals that go and take from us,” Gonzalez declared. “They take our land, kill our people, and destroy the environment.”

Gonzalez talked about the United Fruit Company’s hold on Guatemala, and the suffering of indigenous Mayan people there.

“The way of life of the Mayan nation and all ancestral nations was devastated,” he said. “One thing however remains unchanged: we are suffering a racist genocide. We continue to be oppressed by greed.”

Just as speakers at the National Day of Mourning draw comparisons between historical land disputes and modern environmental struggles, this event also highlights similarities between the racism endured by Native populations during colonization, and the continued oppression of marginalized people in the US today.

In doing so, the UAINE has successfully garnered a support base that cuts across racial and ethnic lines. Organizers say it’s a movement not just for people of American Indian origin, but for all who see a problem with racism and inequality in the US today.

Everett Hoagland, a professor emeritus at the University of Massachusetts Dartmouth, attended the National Day of Mourning for this first time this year. Hoagland stands in solidarity with the indigenous people of the United States.

“This country became what it is through the forcible occupation of this land, the displacement of the native population, the genocide against it, the black holocaust and the enslavement of Africans to develop the land free of profit,” he said, making a connection between Plymouth and Ferguson, Missouri, where Mike Brown, an 18-year-old African American, was shot under hotly contested circumstances by white police officer Darren Wilson in August. As has been widely reported, a St. Louis County grand jury declined to indict Wilson on criminal charges last month.

“There is a direct connection for me between Wounded Knee [an American Indian massacre in 1890] and Ferguson,” Hoagland said. “Everything is connected, our histories are intertwined.”