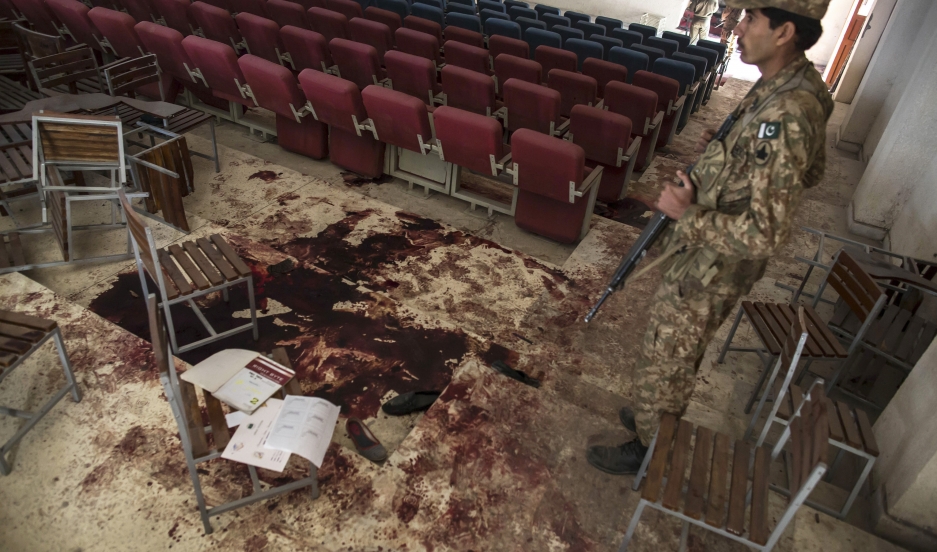 An army soldier stands by blood on the floor at the Army Public School, which was attacked by Taliban gunmen, in Peshawar on December 17, 2014.

It’s almost a cliché to talk about a terrorist attack as a massacre of innocents, but Tuesday’s attack by the Pakistani Taliban on a school in the city of Peshawar can hardly be described in any other way.

Seven militants broke into the school and went from room to room, killing students and teachers. Some 132 boys and girls, most between 12 and 16, were killed in all, along with nine teachers. Security forces eventually managed to kill all seven of the attackers.

Survivors are beginning to tell stories of incredible heroism during the attack, including a 14-year-old boy who told the BBC's Shahzeb Jillani "about how his class teacher tried to protect her students when these gunmen barged into the classroom. She told the gunmen that she would not allow them to harm the children, and she said to them ‘over my dead body.’"

The result of her defiance was horrifying: "They killed her, or rather, they threw something at her. Her body was set on fire. She was screaming. And even, even in that state, she was asking the children to run for their lives.”

The boy told Jillani that his dead teacher is now his hero. “I looked up to her. And I’m alive today because she put up resistance.”

The school was targeted because it’s run by the Pakistani Army, and many of the students are the children of soldiers and veterans. "We targeted their kids so that they could know how it feels when they hit our kids," said Mohammed Khurasani, a Taliban spokesman.

The Pakistani Taliban said the attack was in retaliation for an army operation against their stronghold in the district known as North Waziristan. "This is about power. It's a power struggle," says Karachi-based writer Bina Shah. "It's about showing they still have the strength to strike at the heart of Pakistan, even though they have been severely weakened by the military attacks."

To say that Pakistan is struggling to come to terms with the massacre would be an under-statement. Schools and markets were closed, and protests and vigils have been held across the country. In Peshawar itself, the funerals for the students began on Wednesday.

"The grief and shock and anger are unprecedented. I have not seen this type of anxiety and people coming together to condemn the Taliban once and for all," Shah says. "But we're still waiting for the cue from our leaders."

Shah says Pakistani military officers and politicians have responded in two different ways. The military says the attack will strengthen their determination to fight the Taliban, while politicians say they need more time to figure out an appropriate response. Some want the Taliban wiped out, but others are calling for peace talks.

"We just want them to take charge and do the right thing," Shah says, but admits that "we honestly don't know if they are going to."