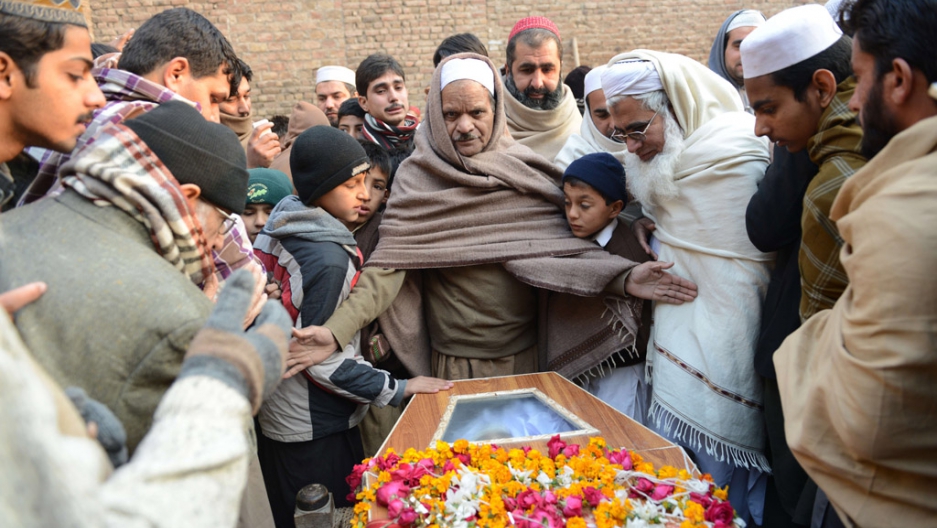 Pakistani mourners gather around a coffin during the funeral ceremony for victims of an attack by Taliban militants at an army-run school, in Peshawar on Dec. 17, 2014.
Credit: A MAJEED
Share

Pakistan is now in mourning, after a gruesome attack on a military-run Peshawar school on Tuesday in which members of the Pakistani Taliban (TTP)  killed at least 145 people, including 132 children.

"My body was shivering. I saw death so close and I will never forget the black boots approaching me — I felt as though it was death that was approaching me," said 16-year-old Shahrukh Khan, who survived the massacre.

Scenes of bloodied students and mourning mothers sent shockwaves around the world, drawing condemnation from even the Afghan Taliban. The militant group's spokesman, Zabiullah Mujahid, said in a statement that "killing innocent children" goes against the group's principals.

Writing for the New Statesman on Tuesday, Samira Shackle pointed out that although Pakistan "has lost well over 40,000 innocents to terrorist attacks since 2001," this week's attack has still shocked the nation.

Recent Nobel Peace Prize recipient Malala Yousafzai, who survived an attempt by the group to kill her two years ago for her work campaigning for girls' education, said that she was "heartbroken" by the news.

Attacking school children isn't a new tactic for Pakistan's militants. According to Save the Children, Pakistan saw more than 800 attacks on schools between 2009 and 2012 — some groups have counted more than 1,000 attacks in the last five years.

But there's a lot more standing between Pakistani schoolchildren and a quality education than the TTP. Pakistan is second only to Nigeria for number of children out of school, with 5.5 million school-age kids unenrolled. There's also a huge literacy gap between boys and girls in Pakistan. (The overall literacy rate is 46 percent, but girls' literacy stands at 26 percent.)

Another barrier to education is good old fashioned government corruption. Anti-corruption group Transparency International said that they receive complaints about unpaid wages, as well as funding allocated to "ghost" teachers and schools that do not exist.

So why did the TTP carry out the attack?

The group's commander, Jihad Yar Wazir, told the Daily Beast that the school was targeted because of its military affiliation: "The parents of the army school are army soldiers and they are behind the massive killing of our kids and indiscriminate bombing in North and South Waziristan."

Wazir also said that the TTP is "prepared for a long, long war against the US puppet state of Pakistan." Militants see the Pakistani state and army as key instruments in the US drone campaign. The government first acknowledged direct cooperation this past June.

But Pakistan's Defense Minister, Khawaja Asif, has vowed to continue battling the group.

Here's a graphic that will help you understand that Tuesday's attack is part of a bigger, long-running problem. Sources: CNN, UN Office of Children and Armed Conflict, Save the Children, Global Coalition to Protect Education from Attack