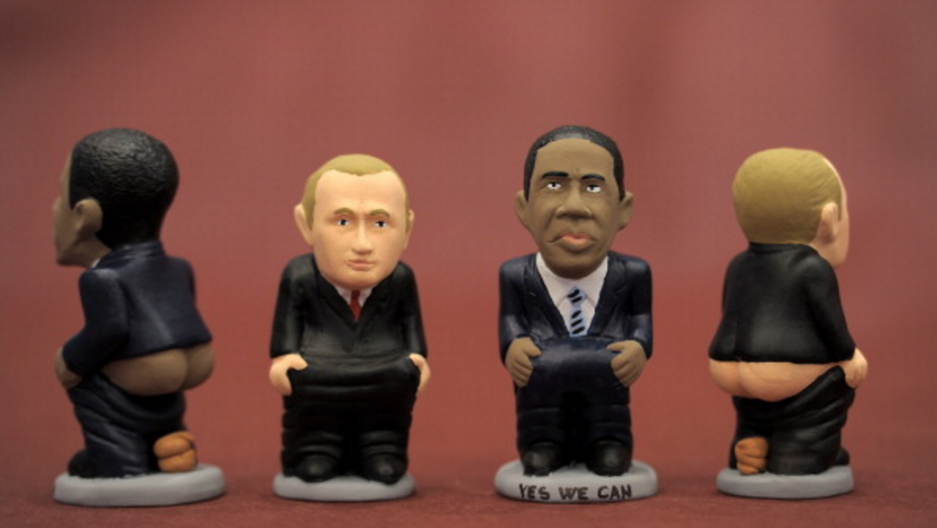 No one is safe: Catalan "caganer" crapping figurines feature Barack Obama and Vladimir Putin, and pretty much anybody in the public eye.
Credit: Lluis Gene
Share

BARCELONA, Spain — It’s Barack Obama as you’ve never seen him before: crouched with his pants around his ankles, bottom unashamedly bared to the world, depicted in the act of defecation.

It’s not just the United States president caught in one of the most private of moments. Everyone from Michael Jackson and Madonna to Shakespeare and Queen Elizabeth has been immortalized as little pooping ceramic figurines thanks to an odd centuries-old Spanish Christmas tradition.

It dates back to the 1700s, when a peasant farmer version of the squatting statues began popping up in Christmas nativity scenes across the northeastern region of Catalonia, alongside the usual reverent medley of wise men, shepherds and baby Jesus.

He was christened “El Caganer,” which translates most politely as “the defecator.”

The neat pile of poop beneath him is considered a sign of fertility and good fortune.

Although debate continues as to exactly why, one theory dating back to the 18th century explains that peasant farmers who couldn’t afford fertilizer fashioned a do-it-yourself approach to soil improvement, dropping their own fertilizer bombs across their fields each day.

“There was a legend that if a countryside man did not put a caganer in the nativity scene, he would have a very bad year collecting vegetables,” Joan Lliteras, a “caganer connoisseur” and former president of Catalonia’s Friends of the Caganer association, told the BBC.

The Catholic Church mostly turns a blind eye to Spain’s strangely scatological nativity tradition, according to which the bare-bottomed farmer is usually hidden somewhere in the corner.

Having him front and center “would be a lack of respect,” Lliteras says.

Over time, the traditional peasant caganer — clad in a jaunty red Catalan cap — was joined by a host of celebrities, politicians and sports stars from Spain and abroad.

Their depiction doesn’t constitute a joke at their expense, Catalans say.

Sergi Alós Pla, whose family has hand-made caganers in the city of Girona for the past two decades, says the dubious honor is a mark of respect, although he dryly admits that “some people like it more than others.”

His company’s famed Caganer.com catalogue boasts more than 350 characters, with 40 new faces added amid grand fanfare each November to the amusement and delight of tourists, who snap them up as kooky souvenirs.

Obama joined the pool in 2008 after winning the US presidency and quickly became a best-seller. Among this year’s newbies are Che Guevara, Napoleon, Beethoven, Humphrey Bogart, Captain America and the Mario Brothers, as well as Pablo Iglesias, leader of the upstart Spanish left-wing party Podemos (We Can), who was belatedly added after popular demand.

Some new additions draw more heated reactions than others. Last year, the decision to depict the Black Madonna relieving herself landed the company in hot water with Spanish Roman Catholics.

Prior Ignassi Fossas from the Santa Maria de Montserrat Abbey near Barcelona, which boasts a centuries-old statue of the Madonna, wrote in a letter that “using the image of the Virgin of Montserrat for this grotesque figurine seems to us a sign of insensitivity and lack of respect to many people who could feel their beliefs are hurt.”

Pla family members insisted they’d chosen the Black Madonna not as a religious icon but as the patron saint of Catalonia, to commemorate the 300th anniversary of the siege of Barcelona.

Nevertheless, after the first 700 figurines rapidly sold out, the company quietly decided against a reissue.

This year, the family treaded more carefully. A gentleman depicted atop a dragon — an obvious reference to the legend of Saint George — is titled simply “Knight and Dragon.”

For anthropologist Louis Mallart, it’s a big fuss over nothing.

He believes the caganer should be lauded as one of the nativity scene’s most honorable figures, “perhaps even more than the shepherds or the Three Kings.”

The kings “offer the infant Jesus something material, external to themselves: honey, gold, frankincense and myrrh,” he wrote on a Catalan blog, “while the caganer offers with humility something which ‘comes out’ of his own heart, something that farmers worldwide consider to be the best fertilizer for the earth.”

Catalans also dote upon the bounteous “Caga Tió” or Poo Log — literally a log of wood with a cheery face painted on one end and often topped with a red Catalan cap.

Children spend fifteen days before Christmas caring for Caga Tío, fattening it up with gifts of food and drinks and draping it with a blanket to ensure it doesn’t get cold at night.

More from GlobalPost: Portugal is shaking up the wine world

Although no one’s really sure where Catalonia’s Yuletide poo preoccupation stems from, Pla says respecting the curious custom may well pay off.

“It is weird that our family can live from a crapping figurine,” he says. “But — and I don’t know if it’s because of the caganer tradition — my grandmother always said our family has a lot of luck. Things always seem to go smoothly for us.”