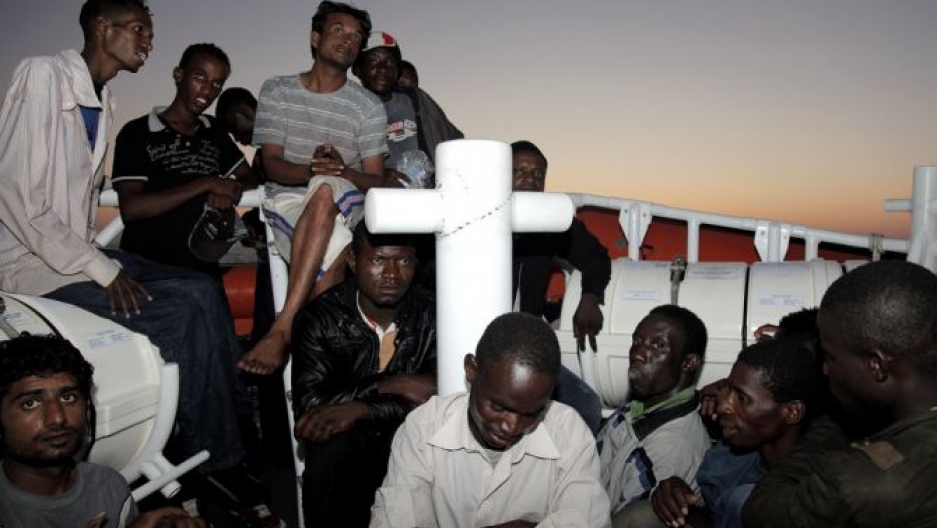 Migrants saved during a shipwreck in the Mediterranean on Aug. 5, 2014.
Credit: Francesco Malavolta/The GroundTruth Project
Share

ROME — Italy’s ports, overflowing with refugees escaping war and persecution, symbolize the urgency of the humanitarian crisis on Europe’s border. Yet after surviving harrowing journeys to reach Italy, few plan to stay there.

Of approximately 74,000 Syrians and Eritreans who landed in Sicily this year, less than one percent had applied for asylum in Italy by the end of November.

EU regulations theoretically require those who arrive in Europe to apply for asylum on the first soil they touch. But many migrants try to avoid regulations because most border countries, like Italy and Greece, have limited resources to absorb them. Experts say EU regulations are so loose and refugee programs so inconsistent across the 28-member bloc that many migrants are driven to evade the rules, hoping to travel to EU countries with better resettlement services and job markets.

In Italy, as Rev. Mussie Zerai explained, even legally recognized refugees have difficulty accessing basic services needed to integrate and rebuild their lives. Zerai is a Catholic priest who fled to Italy from Eritrea 23 years ago and now runs a migrant advocacy association.

“In Italy, it’s a disaster, because we have thousands of recognized refugees who are forced to live the life of barbarians, living on the street or in abandoned buildings,” he said. Without a registered residence, it’s impossible for them to address other basics, such as medical services and school.

Ten years ago Besher Zeinedin arrived in Italy, escaping life as soldier in Ethiopia. He said he was lucky to survive the journey to Europe, but wishes he had not allowed himself to be fingerprinted in Sicily because it barred him from seeking asylum in, say, Germany or the UK. Although Italy granted him asylum, there was no useful resettlement structure to ease his transition.

“After you’ve had to cross the desert and then the sea, all they give you is a card,” he said. “Someone with political asylum status is supposed to at least get help finding a home, learning the language, getting a job. We’ve heard it’s like that in other European countries. But here you get permission to stay and then it’s, ‘Ciao.’”

Italy isn’t alone. Greece, Bulgaria and Spain share the paradox of being countries on the receiving end of the largest numbers of migrants and, at the same time, being the least equipped in the EU to absorb them.

One of the biggest problems is that, even after gaining legal status, many refugees lack access to jobs or ways to validate their professional skills. The Eurozone crisis also has battered the southernmost countries hardest, saddling them with high rates of unemployment. Even after living in Italy for several years, the Italian Council for Refugees estimates, at least half the country’s refugees are still working off the books.

“Refugees find their place in this informal or illegal labor market quite often under really shameful conditions of extreme exploitation,” said Christopher Hein, the refugee council’s director. “You work and live in an absolutely precarious situation, and this can also increase xenophobic and racist attitudes.”

Since other EU nations such as Germany, Sweden and the Netherlands offer refugees housing, modest stipends and more job opportunities, an unofficial system of asylum shopping has emerged. Aid workers said last summer that Italy unofficially began allowing migrants to slip north without recording their arrival in Italy — a win-win for a country looking to shift the burden of accommodating refugees to other member states and for migrants hoping to reach better services and jobs elsewhere.

But this technically illegal shift of responsibility is not sustainable, said Kris Pollet of the European Council on Refugees and Exiles. He said it causes political infighting between poorer, less-organized southern EU members and their northern neighbors — at the expense of refugees.

“There’s a constant area of tension there,” Pollet said. “A number of states like Italy and Greece…have not invested sufficiently in their systems to get them up to speed with their obligations under EU law, which is then becoming an excuse for other states not to do anything.”

Despite these challenges, glimmers of hope exist. Amid the urgency of the ongoing crisis, the EU is initiating efforts to standardize reception services for asylum-seekers, including directives meant to raise standards of welcome conditions and asylum procedures across Europe by mid-2015.

Where political will exists, the EU has achieved notable improvements. Last year, with Bulgaria’s refugee welcome centers in shameful condition to handle an influx of Syrians refugees, the European Commission helped the country raise its standards quickly by pouring 5.6 million euro ($7.6 million) into emergency funds to upgrade facilities. There are now 6,000 beds available for new arrivals, up from just 1,200 last year. Those arriving receive two hot meals a day and now have adequate staff to attend to medical needs and the processing of asylum claims.

But these improvements do not address the disparity in available services for registered refugees across the countries of the EU, a situation Philippa Candler, who heads policy and legal support for the UN High Commissioner for Refugees, sees as a major challenge.

“...It’s all very well to have a standard system for hearing your asylum claim,” Candler said, “but if, at the end of it, in one country you are going to be able to get a job and be supported to learn the language and your children will be easily integrated into school, it’s quite a different perspective than if you’re in another country, where it’s much more difficult.”

As things stand, Hein of the Council on Italian Refugees remains skeptical of the EU’s potential to harmonize refugee social rights. Despite the EU’s power to fix general rules, “there’s not a clear prescription, an obligation for member states to establish national integration programs,” he said. “So I have not a hope that we’ll see something significant done in the future.”

Kavitha Surana and Maggy Donaldson reported on European migration this summer as part of their two-year M.A. in Global and Joint Program Studies at New York University. Follow them on Twitter @KSurana6 and @maggydonaldson.