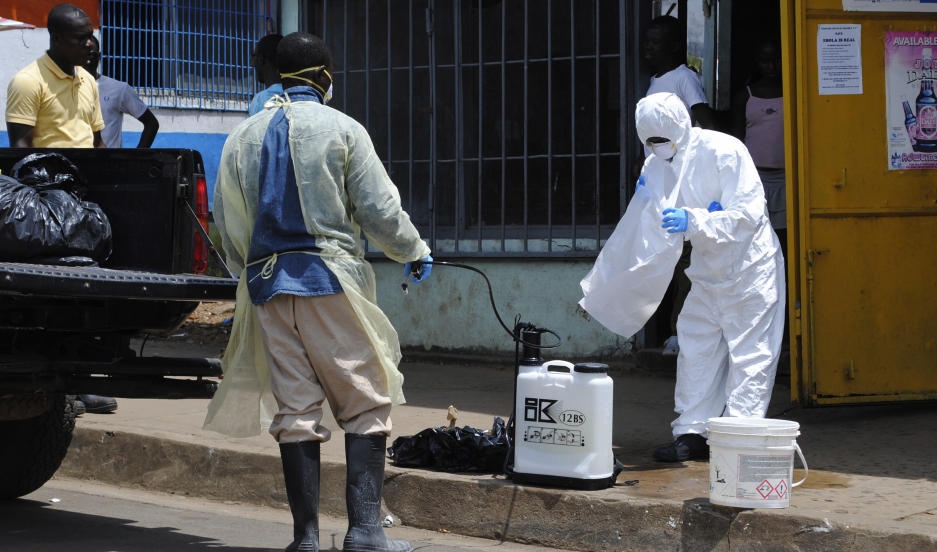 A member of a burial team prepares to spray a colleague with chlorine disinfectant in Monrovia.

In the Liberian capital of Monrovia, millions of dollars have been invested in new health facilities to fight the Ebola epidemic. But some of the most basic tasks are still difficult to fund, including the visits of "contact tracers," whose job it is to decide who should be quarantined as a health precaution.

Sharon McDonnell, an American epidemiologist who is working in Monrovia, has spent time with the contact tracers and other frontline staff. The World has been following her progress as she helps to design strategies to fight the disease.

McDonnell has visited some of the most heavily affected slums in Monrovia with tracing teams who claim they are not receiving the hazard pay to which they are entitled. Some also say they have not been provided food to offer to quarantined people, an essential resource in persuading people to stay at home and observe quarantine rules correctly.

"There was a lot of frustration, people yelling back and forth," McDonnell says. "They said, 'We are at the frontlines with no ammuntion.'"

McDonnell says understanding how health directives are being carried out on the ground is essential to containing the spread of the disease. It's also vital to find out the unintended consequences of outside intervention.

There are now some optimstic signs in Liberia: The number of new cases per week has began to slow, suggesting that the interventions are taking effect.

But a moment of improvement can also be dangerous. A sense of shared national crisis has helped people accept drastic changes in their lifestyles, from avoiding handshakes to observing quarantines. Sustaining these changes long enough to end the outbreak will be difficult, McDonnell says, particularly when the news turns optimistic.

"There are what we call perverse incentives," she says, "[The improvement in disease prevention] creates its own pressure, and people long for normalcy."

That's particularly on display when it comes to burying dead bodies. The local custom of washing a body before burial has been discouraged because of the risk of spreading infection, but the emotional cost has been high. Without safe and culturally appropriate alternatives, it will be difficult to keep people from returning to traditional body washing.

Sharon says it's vital to manage expectations over the coming months. Case numbers have improved, but that doesn't mean the problem has been solved.

"Ten to 20 cases a day is still an emergency," she says. "It's still a disaster, an emergency, an epidemic — but it's not as bad as we planned for. So now the plans need to change."