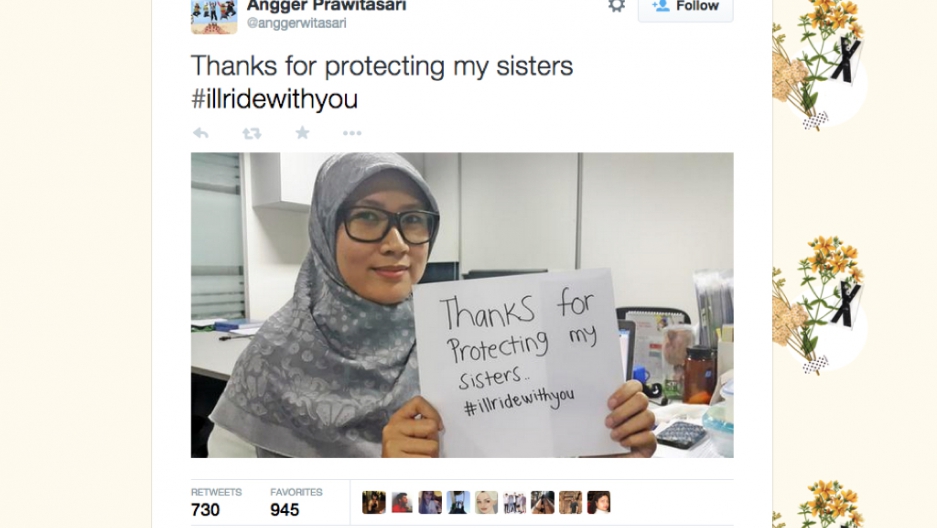 The writing was on the wall from the moment hostages in a downtown Sydney cafe held up a black flag with Arabic script emblazoned on it.

The hostage situation in Sydney comes three months after a major counterterrorism operation in which 15 people allegedly influenced by the Islamic State were arrested in connection with a plan to carry out random public beheadings in Sydney and Brisbane. So tensions are understandably high in Australia when it comes to terrorism and the influence of IS, also known as ISIS or ISIL.

Nevermind that Monday's siege turned out NOT to be the work of a team of IS operatives, but rather, a single lone wolf named Man Haron Monis. According to police, he's an Iranian refugee with a criminal record of sexual assault and hobbies that include sending hate mail to the families of Australian soldiers.

It appears that's close enough for some people in Australia. Within hours, according to Reuters, there were reports that Muslim women in hijab had been spat on, right-wing groups were calling for protests at mosques, and the Australian National Imam's Council, an umbrella organization for the country's Muslim groups, found itself in that all-too-familiar and absurd position of having to defend all of Islam thanks to the actions of a few disturbed people — in this case, just one.

But encouragingly, many Australians are standing up against Islamophobic backlash, and using the Twitter hashtag #illridewithyou to do it.

It started with these tweets.

And then this happened.

If you reg take the #373 bus b/w Coogee/MartinPl, wear religious attire, & don’t feel safe alone: I’ll ride with you. @ me for schedule.

Just like that, it was a thing, and tens of thousands of Australians were offering to literally stand by their Muslim neighbors.

Just found an explanation of the #illridewithyou hashtag that has came from the Sydney hostage situation- very moving pic.twitter.com/St4BAEcqP0

Beautiful, right? Well, before you feel too good about the world, know that lots of people are concerned about the racial and gender politics of #illridewithyou. Let's say you're a white Australian man who shows up to ride with a brown-skinned Muslim woman in hijab. Is that solidarity? Or just a socially damaging reaffirmation of white male privilege?

My first thought upon seeing the #illridewithyou on my tl: I can’t offer that because I’m not even white. My protection isn’t worth anything

But then again, if you go back to the source, you'll find that the woman who started the hashtag is a woman of color.

The person who started #illridewithyou is a woman of colour so when critiquing it, don't ignore that fact.

And for her part, she's under no illusions about it.

For the record, I agree with @Msloulou77. Hashtags are useful, but this sickness runs centuries and societies deep.

It's obviously complicated. #illridewithyou doesn't really prove anything about race and religion in Australia. It also probably isn't the start of a mass movement against Islamophobia, and maybe won't even start a larger conversation about social justice.

But MAYBE, a few people will feel just a bit safer today, and that's a good thing.

The #illridewithyou hashtag has shown me just how many of my hijabi friends are truly terrified of leaving the house tomorrow :( subhanAllah