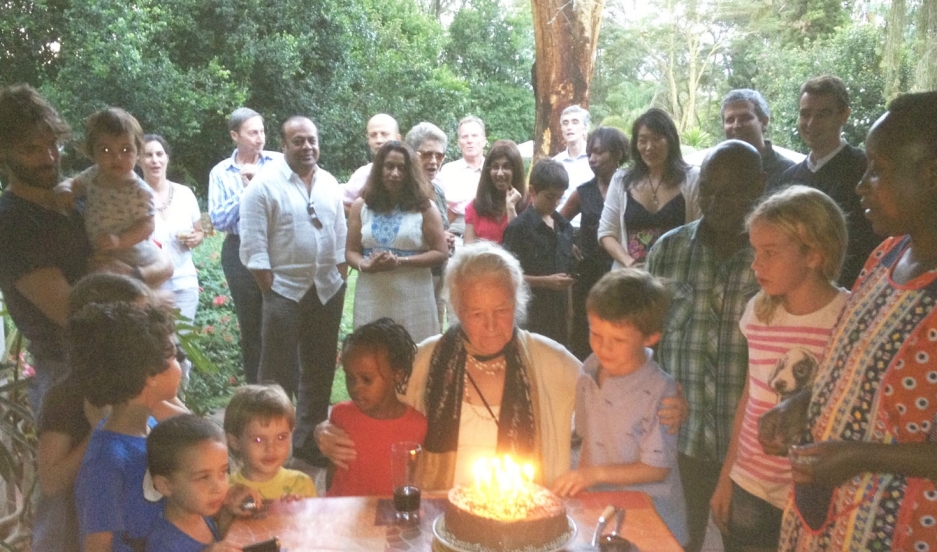 The author's mother celebrates her 93rd birthday in Kenya

I just clicked on the New York Times “most emailed” article on Tuscany and Machiavelli and sent it to my mother. Machiavelli was the last class she taught before retiring as a professor at Columbia University and I thought what better way to connect across the miles on her birthday.

She has long ago given up my childhood companion, her manual olive green Olivetti typewriter, for the less noisy touch of Microsoft Word and Gmail. This month, Maristella, known these days to her children and friends alike as Mina, turns 95.

In the jumble of the everyday, the every year, the talk of weather and health, of ISIS and Hong Kong protests, and my mother’s adamant arguments that I should go back to studying Sanskrit since I live in Nepal, I never seem to have found the time or the patience to articulate what only I know and only I have experienced as her youngest child. I am sad that yet again, living halfway around the world, I am not celebrating with her.

My mother never bought me a doll. It was not her way. She prefers to weave tales. She put me to bed with them.

On long car rides between churches, museums and ruins in Europe, I’d curl up my head on her lap and follow the exploits of Alexander the Great or the battle of Thermopylae or my mother’s adventures as a partisan in World War II Rome. I can still feel the silky touch on my cheek of her brightly colored scarf that she lay over my head to block the afternoon sun.

As I grew older, and was introduced by her to the wonders of books, I learned to leverage reading, knowing that Mina would let me skip washing dishes if I went off to the couch to read War and Peace. If reading became my escape and her tales of wars ignited my desire for adventure, we also clashed on the way.

I had to learn French, Latin, then Greek. When I eventually convinced her I could drop Greek, she replaced it with German. That meant that, every weekend, hours were spent butting heads on homework assignments.

But exploring has always been our special link. Though more than 40 years of her life have been spent at Columbia University, she, like me, feels the need to see and smell and feel different worlds. My mother has kept all of the hundreds of loneliness-filled aerogrammes I wrote her during a post-college year studying Chinese in Taiwan and then wandering South Asia. She has gotten on many planes to visit me and not to reach idyllic vacation spots.

In Peshawar, Pakistan, where I was a stringer for The New York Times, she insisted on visiting refugee camps and the families of the Mujaheddin fighters I traveled alongside in Afghanistan. She ignored my strict instructions not to interfere in my reporting and asked Abdul Haq, a senior Mujahed commander (who was later killed by the Taliban in 2001) to swear to her that his men would keep me safe. The following year when at the UN General Assembly in New York, Abdul Haq dropped by her apartment with a dozen red roses.

In Africa for the The New York Times, having “Mama” along on interviews opened innumerable doors — though she did occasionally weasel in time for her own questions. Before I could begin my interview with Kenneth Kaunda, the legendary first president of independent Zambia, Mina and Kaunda opined for over half an hour on every topic from St. Augustine to Apartheid and World War II.

When I covered post-genocide Rwanda before the widespread use of the Internet, Mina sent the Hotel Milles Collines daily faxes to me commenting in detail on my day’s article. They were all written in her scrawling, looping, mostly illegible handwriting.

My response always included: “Please type!” When I told her I planned to leave The New York Times for NBC News, Mina, whose New Yorkness is defined by the Old Grey Lady, switched to Italian, her language for the most serious of conversations: “Ma sei pazza?” she asked me. “Are you crazy?” She did eventually come around.

These days, she Facetimes to find out why my 9-year-old son, Lucas, is not learning Nepali history in the British school in Kathmandu. She is relentless about admonishing me to find sacred Hindu texts to study in the local university libraries. That I am more interested in the legacy of a Maoist civil war and the problems of creating infrastructure in Nepal is irrelevant to the conversation.

My primary image of my mother has always been of her writing, teaching or reading. (You can find her novels on Amazon under Maristella Lorch). Her apartment bookshelves overflow with diaries, lectures and heavily underlined and annotated books.

I tease her that its hard to go anywhere without meeting one of her students, who probably will describe her reciting the Divine Comedy in a class 30 years gone. Lucas and I believe that our Rhodesian Ridgeback must be related as, like her, he insists on accompanied long daily walks.

And every time Mina brings up the subject of walking (which is every day,) I slip back to her childhood tales of when her own mother made Mina and her three siblings hike up the local mountain in Northern Italy, lugging their Latin homework and the pot to cook the lunchtime polenta.

Scratch the surface and you’ll find the party girl who even carried a frozen turkey to Rwanda to cheer up my friends far from home. Mina never likes to be left out. At a get-together in Nairobi, she convinced a dashing blond British cameraman that what he really wanted to do was take her to Mogadishu (I blocked that plan).

If there is an image I treasure of Mina in action, it is watching her barefoot in an ankle length wispy summer dress, dancing and twirling with my father on our lawn in the Catskills.

She’s a woman who is always ready for another adventure.

This essay was excerpted from a post in Donatella Lorch's blog from Nepal, Tangled Journeys.