Ice scientists Ken Golden and Chris Polashenski drill a plastic tube into the Arctic ice cap north of Alaska as part of their research into melt ponds that form on the ice every spring. The ponds play a key role in the accellerated warming of the Arctic, but scientists have had a hard time predicting when and where they'll form, and understanding why they stick around as long as they do.

On a bright day in early May, Chris Polashenski tromps across the ice north of Alaska — 100 miles from the nearest land — to sink half-a-dozen plastic pipes into the ice.

Other researchers are spread out around the Healy, a Coast Guard icebreaker. Some have begun drilling through the ice or sawing up sections of it, the din piercing the Arctic air.

They’re all here because the Arctic is ground zero for climate change. Scientists know the region is warming up faster than any place on Earth, and that the ice cap here is shrinking fast. But scientists still need to get a better handle on what’s going on in the Arctic as the Earth warms up, and how that might affect the rest of the planet. 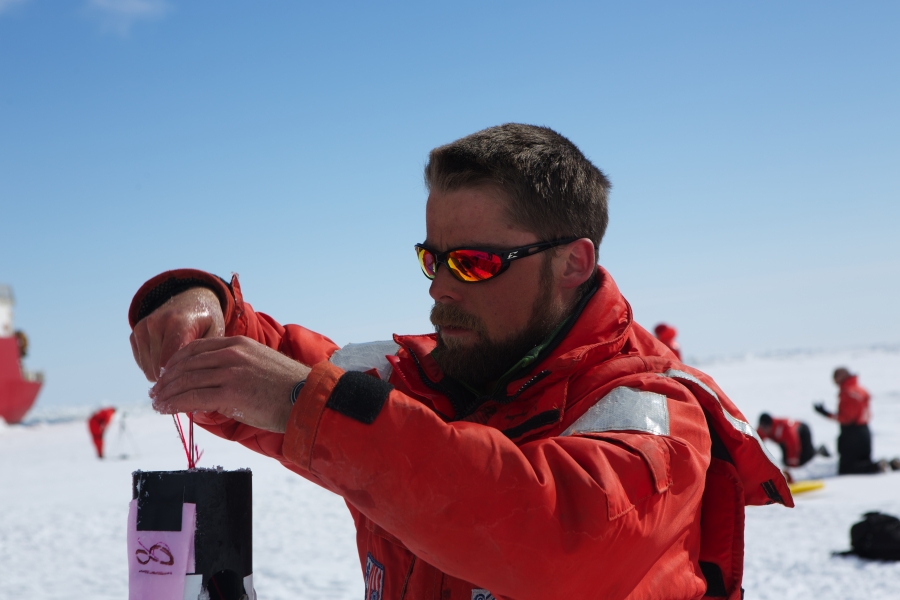 Geophysicist Chris Polashenski drops a pressure sensor into a plastic tube that he's using for his research into melt ponds that form on the Arctic ice every spring.

Polashenski is geophysicist from the US Army Cold Regions Research and Engineering Laboratory in New Hampshire, and he’s setting up these pipes to help study a big spring change that comes to the Arctic every year.

The snow here will start to melt around June 1. Water will start pooling on the surface of the ice, and those melt ponds will soon cover vast areas of the Arctic sea, turning the icy surface into a mosaic of intense opal blue.

“It’s one of the most dramatic transformations of a landscape there is anywhere on Earth,” Polashenski says.

But it’s more than just a beautiful change: It can have a big impact on the global climate. That’s because the darker blue ponds absorbs more sunlight, which means more heat, than white, snow-covered ice.

Right now, Polashenski says, “about 80 percent of the sunlight that’s coming in goes right back out to space. And [that will] very, very quickly drop to as little as 20 percent as soon as that water starts pooling on the surface.”

More heat can mean more melting, which is exactly what’s been happening here: The Arctic has lost half its summertime ice since the 1970s.

Scientists know that melt ponds are crucial to understanding what’s going on up here, and, through that, what’s in store for the rest of the planet as changes in the Arctic reverberate throughout the global climate system.

But those same scientists have been struggling to simulate the ponds in computer models that forecast the Arctic climate. They can’t predict exactly where or when the ponds will appear, and they don’t really know why the ponds even stick around. 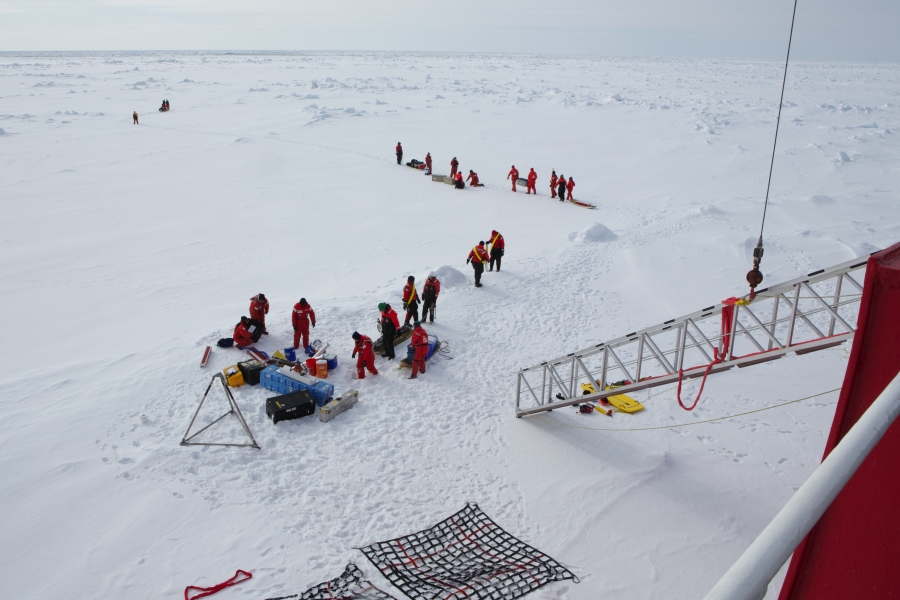 Crew and scientists traveling on the U.S. Coast Guard icebreaker Healy unload equipment in the lee of the parked ship before hiking off to set up their research projects in undisturbed snow.

That’s where Polashenski’s drainpipes come in.

He stands by one of the tubes with a bucket of seawater and starts to pour it in. “I can fill it up,” he says, “put 10 to 15 centimeters in there, and there it goes, doo-doo-doo-doo, right back down.”

The seawater just drains right through the meter-thick ice, which looks solid but is actually full of tiny cracks. So if the water can drain through, why do the melt ponds even form? It’s a question that’s long nagged at Polashenski.

“What could possibly be making it, on the one hand, so permeable that we can’t even measure it,” he asks, “and on the other hand so thoroughly impermeable that the two centimeters of melt water that form on the surface, stay on the surface for a week?”

Chris Polashenski uses an electric drill to core out a sample of sea ice. He uses the cores to investigate the tiny cracks in the ice that may or may not allow water to drain from melt ponds.

He hopes the answer will come from the second part of what he calls his “crazy experiment.” He moves over to another tube, pours in another bucket of water, and waits. Nothing happens.

“It’s not draining out,” Polashenski says. “Just like the melt ponds. It’s going down into the ice and cgggg — clogged.” How does one bucket of water drain through the ice, while the other doesn’t?

Here's how: The second bucket was full of fresh water, the kind you get when snow melts, not salty sea water. Fresh water freezes at a higher temperature than salt water, so it solidifies inside those tiny cracks in the ice when sea water won’t.

It's Polashenski’s eureka moment: That’s why the ponds stick around.

It’s a seemingly simple answer to a riddle that had stumped researchers for years. It's hard to imagine no one had thought of it before, though Polashenski admits he already had. “I published the idea in a 2012 paper,” he says, but until now, “I wasn’t really sure it was all that good of an idea.”

His colleague Ken Golden, an ice mathematician from the University of Utah, seems equally astonished at the simplicity of the answer.

“It seems obvious now,” Golden says, but it took real-world research to make it clear. “This is great. This is what you come out here for, see stuff like this!”

The discovery by Polashenski’s team is just part of the melt pond puzzle, but it’s a big piece. The group poses for pictures to capture the moment, but there’s little time to celebrate. Between setting up the experiment and carrying it out, they’ve been on the ice for four hours, and it’s time to break down, get back to the icebreaker and move on to the next research site.

There’s plenty more work ahead for Polashenski on this Arctic expedition. But his findings on this piece of ice might make the biggest splash in helping to understand what lies ahead for the Arctic — and the rest of the world.