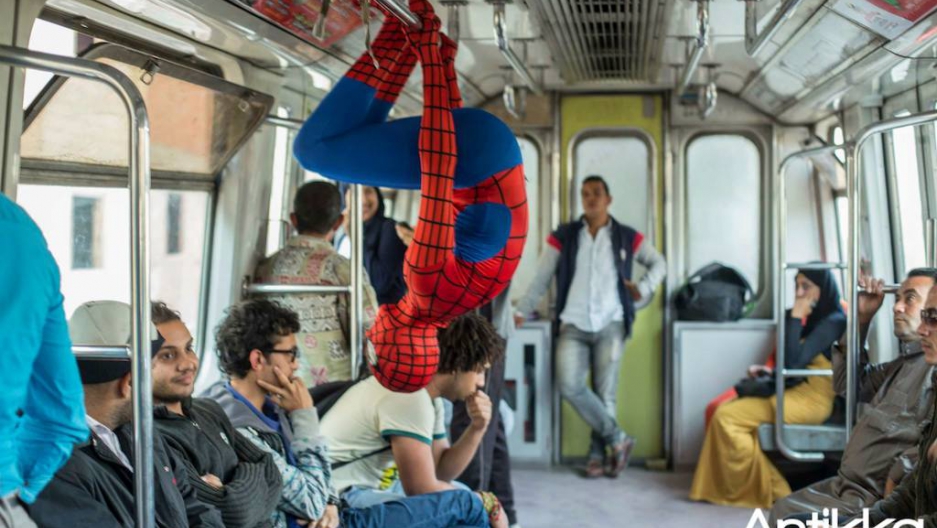 CAIRO, Egypt — Like most superheroes, Cairo’s own Spiderman aspires to use his powers — in this case his camera and agility — for the benefit of humanity.

While this metropolis of 20 million people has a lot going for it, most of its inhabitants will likely concede that it also has a way of bringing them down at times.

It is precisely this daily Cairo grind that two residents are aiming to highlight, with a little help from Spidey.

"A normal day for us is not like a normal day for other people. It's really hard, with the traffic and the noise and everyone is in everybody else’s space," says Hossam Atef, a 20-year-old photographer with Antikka Photography.

“There are a lot of problems. The buses don’t stop, the lights cut out, you might find a thousand people in one metro station.”

He and his friend Atef Saad, a 21-year-old chef, say they want to draw attention to the difficulties faced by Cairenes.

“We thought if Spiderman spent a normal day of an Egyptian’s life, what would happen?” Saad, who donned the Spiderman outfit, told Ahram Online.

The photographs show Spiderman struggling with situations faced by residents of the city: taking the metro, sprinting to catch a packed bus as a hand reaches out to help him in (a common scene) and even becoming the victim of a staged mugging.

“Spiderman is the closest thing to a normal person, not like Superman,” says Hossam, explaining his choice of superhero. “And honestly, the batman costume was really expensive. I’ve had the idea for a while but I didn’t know where to get a costume.”

But the toughest obstacle Spidey encountered? The police.

Like it is for most people these days, particularly anyone who has ever taken to the Egyptian streets with a camera, escaping the increasingly visible police presence can be a daily struggle. In order to avoid detection on the metro Atef pulled on a galabeya — a long cotton robe traditionally worn by men in Egypt — over his spandex.

The two feared that security forces would not understand what they were trying to do. They weren’t wrong. On one occasion the two were stopped by the cops and asked to show ID.

“They searched us and asked ‘why are you photographing and who are you with?’” said Atef.

Those who take pictures in public spaces are often asked by security services to show a permit, sometimes even tourists.

“The feedback from people was a little strange,” says Atef. “Little children thought it was really Spiderman.”

“And the older people, one man thought he was someone from the state, someone with Sisi. They said ‘God bless you, my son,’ and ‘May God keep you, Sisi.' They thought we were doing a campaign about justice with the government.”

At the end of the day, Spiderman was “exhausted,” Atef told Ahram Online. “In fact, all Egyptians are superheroes for enduring these difficulties every day.”