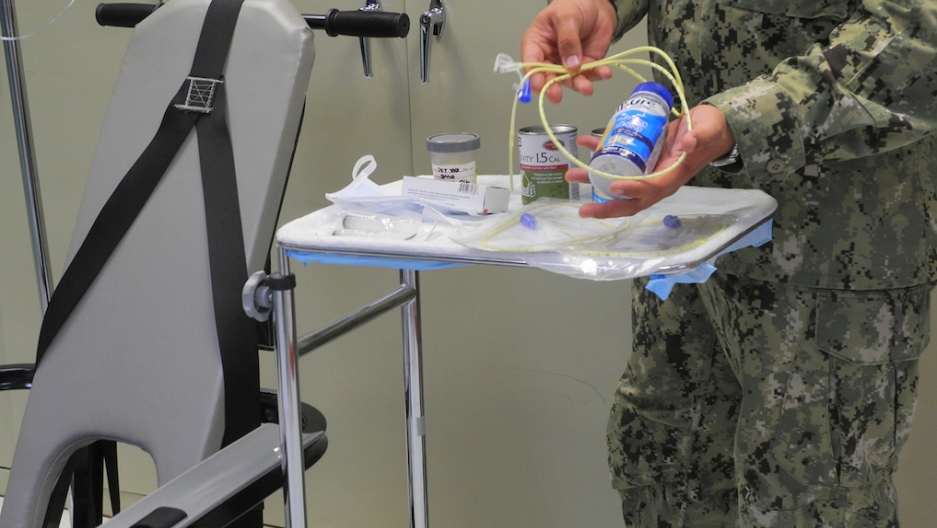 COYHAIQUE, Chile — Six former prisoners of the United States military’s Guantanamo Bay detention facility arrived in Uruguay this weekend after more than a decade in captivity. None of the men was ever charged with a crime.

With their arrival, the small South American country has also landed right at the center of a high-profile lawsuit over the US military’s force-feeding of Guantanamo prisoners during a monthslong hunger strike. That lawsuit will continue despite the detainees’ release.

The force-feeding case also raises new questions about why Uruguay’s outgoing President Jose “Pepe” Mujica decided to delay the prisoners’ transfer until after his country’s national election. Uruguayans went to the polls on Oct. 26 and again for a runoff vote on Nov. 30.

Here’s a quick explainer about the case, the Mujica delay, and how the lawsuit is likely to progress now that the prisoner at its center is a free man.

Abu Wa’el Dhiab is a 43-year-old Lebanon-born Syrian national. Pakistani authorities captured him in 2002 and handed him over to the US government, which held him at Bagram Airfield in Afghanistan before transferring him to Guantanamo. The US cleared him for release in 2009 but he remained in the military detention center in Cuba until this past weekend.

According to the Defense Department’s confidential file, which can be viewed on WikiLeaks, Dhiab was suspected of being a document forger aligned with Al Qaeda. He says he was a honey seller with no links to terrorism. (The file refers to him by several names, including Jihad Ahmed Mustafa Diyab.)

Dhiab and scores of other prisoners began a hunger strike in 2013 in protest of their continued detainment. Officials began force-feeding some of the detainees a liquid supplement in order, the US government says, to keep the men alive.

Several months after the strike began, most of the men started eating again, but a few, including Dhiab, continued the strike. The military continued to shove feeding tubes up the striking prisoners’ nostrils into their stomachs.

Dhiab’s attorneys filed a lawsuit against the government arguing the force-feeding method is inhumane. In May, US District Court Judge Gladys Kessler temporarily ordered the military to stop force-feeding the detainee, but a week later she reluctantly ruled that the feeding could continue in order to keep Dhiab alive.

A spokeswoman for the London-based human rights organization Reprieve, which has provided Dhiab legal support, said he had remained on hunger strike through at least November.

It’s unclear whether he remained on hunger strike right up until his transfer to Uruguay. One of his attorneys, Cori Crider, tweeted about his weight on Sunday:

I'm in Montevideo but haven't seen him yet, so don't know what state Dhiab is in. When last we spoke he estimated his wt at 140.

But divisions between Montevideo and Washington over terms for a potential inmate transfer quickly became apparent.

Guantanamo watchers blame US Secretary of Defense Chuck Hagel for delaying the transfer process for months.

Meanwhile in Uruguay, election campaigns were heating up. Mujica was barred by law from seeking a second consecutive term, but his party was in a fierce race to stay in office.

Months passed, and there was no word about the Guantanamo transfers. Mujica angrily told reporters he would be the only one making the decision, but failed to explain the delay.

In September, The New York Times reported that a plane had even flown to Cuba to pick up the detainees but the transfer was put off at the last minute. Citing Obama administration sources, the Times reported, “Mr. Mujica was worried that it would be politically risky to follow through because of coming elections in his country.”

The Mujica government denied the Times report. “At no point has any date been set,” Diego Canepa, an assistant secretary to Mujica, told Agence France-Presse.

Polls have consistently shown that a majority of Uruguayans do not support the transfer of the freed prisoners to the country.

But the delay in receiving the detainees is especially significant given Dhiab’s condition over the last few months.

In a court document filed on Sept. 15 by Stephen Xenakis, a psychiatrist who examined Dhiab at Guantanamo Bay, Xenakis recommended an “expeditious transfer” due to the pain and discomfort the prisoner was suffering.

But Dhiab didn’t leave Guantanamo Bay for another two and a half months.

He was flown to Uruguay a week after Mujica’s fellow Broad Front candidate Tabare Vasquez won the vote.

During Dhiab’s court case, the detainee’s attorneys learned that the military had recorded videos of some of the force–feeding sessions. Those videos were shown in court, and Crider said afterward that she had trouble sleeping after watching them.

The military sought to keep the videotapes secret, but a group of media organizations petitioned the court, requesting that the tapes be made public. In early October, Judge Kessler ordered the tapes released. The government just appealed the petition, and the tapes remain secret.

On Monday, The New York Times Editorial Board penned an editorial again demanding the release of the tapes. A Senate report detailing the use of torture by the CIA is also due to be made public on Tuesday.

Guantanamo remains an active prison despite President Barack Obama’s pledge to close it. The State Department periodically announces new countries that have offered to take in prisoners, but 136 men still remain at the facility, 67 of whom have been cleared for transfer to a third party.

Uruguay is the first South American country to receive detainees transferred from Guantanamo. The New York Times reported on Sunday that other countries in the region, including Brazil, Chile and Colombia, had been motivated by Uruguay’s deal to potentially receive other detainees.

In September, Jose Miguel Insulza, secretary-general of the Organization of American States, which represents the countries of the Americas, called on member states to take in Guantanamo Bay detainees who have been cleared for release.

Crider met with Dhiab on Monday.

He and the other six detainees are currently at a hospital in Montevideo, Uruguay’s capital, where their health is being assessed. Crider said Dhiab seemed upbeat and ready to start a new life.

Mujica, who engineered the transfer of the prisoners, said they will be free to leave Uruguay as soon as they arrive. But crossing Uruguay’s borders would require a passport and other documentation.

Crider said the former detainees will be applying for permanent legal residency in Uruguay.

Clarification: This article previously stated incorrectly that Uruguay was the first in Latin America to receive released Guantanamo prisoners. The Central American country of El Salvador had already done so in 2012. Uruguay is, however, the first in South America.