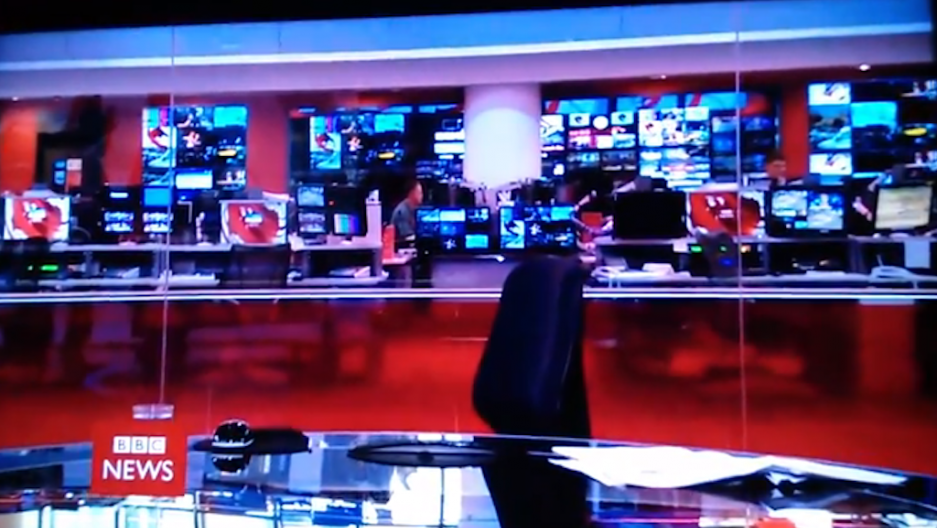 The robot cameras were reportedly a cost-saving measure for a public broadcaster facing big budget cuts.

With no human operators to manually guide them, the cameras have a tendency to wander away during live broadcasts.

This can be a problem.

At times the rogue cameras appear distracted by something shiny on the other side of the newsroom, before suddenly remembering they’re at work.

Occasionally, they refuse to acknowledge the presenter altogether.

This puts journalists in an awkward position. Some offer embarrassed apologies to viewers while scurrying to get back in the frame.

Some quietly sink away.

Others teeter on the brink of an on-air meltdown. Watch this business reporter flail through a segment on the airline industry before snapping, “I’m not touching your precious robots!” at off-screen producers.

As a gift to camera-fail fans, someone assembled a whole blooper reel last Christmas of cameras spinning around the newsroom, creeping into live shots and stalking hapless reporters.

Perhaps coincidentally, the BBC is shopping for a new computer system that would replace the one currently sending cameras on walkabout.

A BBC spokeswoman declined to speak further on the subject, as the tender is still open and “the BBC must not do anything that might adversely affect that ongoing process.”

The BBC is mostly funded by a tax called the TV License, which almost every household in the UK must pay before legally switching on its television. For a color TV, it’s $227 a year. Blind customers get 50 percent off.

In 2010, the new coalition government froze the license fee and rejiggered the BBC’s finances, saving the government some $530 million a year, according to Chancellor George Osborne.

The changes — a 16 percent cut in the BBC’s operating budget — have forced some cost-cutting at the organization. A spending review ordered by Director-General Tony Hall and published last month has resulted in $1.7 billion annually in cuts since 2008. Most of that came from a cap on the pay and number of senior managers.

The current culture secretary, the Conservative Sajid Javid, has suggested that the license fee could be cut even further if the Tories return to power in the 2015 election. If that happens, newscasters might want to invest in self-defense classes against cameras gone wild.