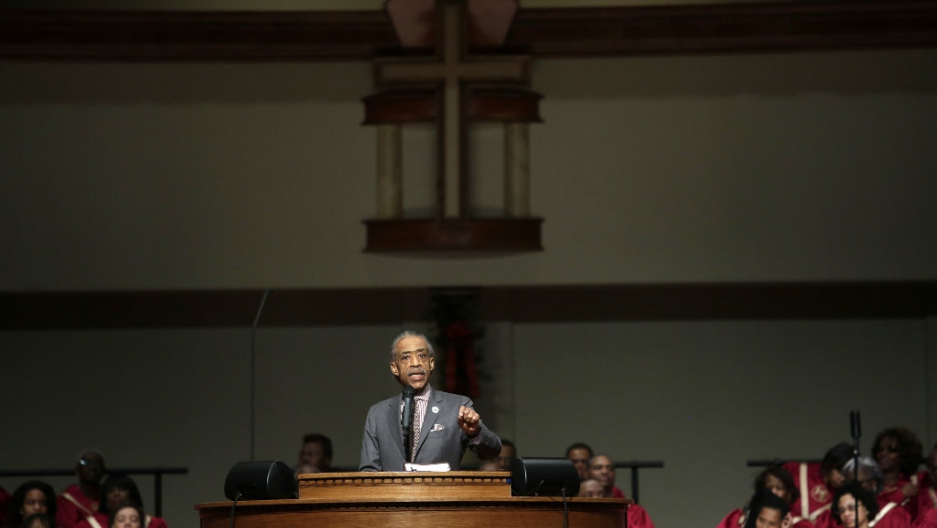 For the vast majority of American Christians, attending church is a racially segregated experience.

Just 7 percent of all US congregations were racially mixed in 1998. By 2012 that number had climbed to 13 percent, according to Michael Emerson, professor of sociology at Rice University and author of three books on religion and race in America.

Around the US, church leaders across denominations have been organizing prayer vigils, writing op-eds, speaking on radio, and reaching out to neighboring congregations. From Ferguson to New York City, clergy of different races have defined their roles in the present moment along similar lines: Seek to provide healing, comfort and support to those in need. Those same clergy are crossing racial lines, often entering challenging emotional terrain, to do so.

Rev. Ross Johnson, a white pastor who heads disaster relief for the Lutheran Christian Missouri Synod (LCMS) and has spent significant time in Ferguson, spoke for many when he said in an LCMS blog post that he is motivated because, “people need to see that the church is present in times of turmoil. God doesn’t call Christians only to what’s easy — He calls us to be His ambassadors in the midst of the storms of crises of the world.”

For the most part, black clergy and Christians have appreciated the response of their white brothers and sisters in Christ, but few see it as leading to any widespread change in America’s persistently monochromatic pews. Rev. Anthony Evans, president of the National Black Church Initiative, thinks the integration of American churches won’t happen, “until Jesus comes.”

For Evans, the divide comes down to a perspective on police brutality.

“The white church does not have the moral intuition to stand with the black church on this issue,” he said, calling for a legal boycott of any voluntary cooperation between clergy and law enforcement in this country, which he describes as unambiguously evil, beyond what is required by law. “We know the white church won’t follow us on this, but until they give up that notion that the law is always right, we will always have a moral and philosophical problem with our white brothers and sisters.”

Evans was careful to distinguish between what he calls the “white church” as an institution, and individual pastors, citing strong support for white clergy who have come to minister in Ferguson. “All clergy have that moral responsibility to serve,” he said, and he knows, on an individual level, that many are moral and just.

For Rev. Willie P. Stallworth, who leads the mostly black community at Unity Lutheran Church in East St. Louis, the counsel of white pastors in Ferguson has been wholly welcomed, though he questions why it took a “tragic murder” to garner such attention.

“The power of the word of God transcends all color, and so absolutely a white pastor can go to Ferguson and do a world of good,” he said. “But everyone has to think: If your call was to serve Ferguson, then what has happened to prevent this prodigious event until now? Why now? There are Fergusons all over the United States, where discrimination and unemployment affect the communities.”

Prayer has almost always occupied a segregated space in America. Rev. Martin Luther King Jr. once lamented how “it is appalling that the most segregated hour of Christian America is eleven o’clock on Sunday morning.”

There are many reasons given for this, Emerson said. Church attendance is largely tied to neighborhoods and social networks, both of which tend to be racially separate. As black and white worship developed in distinctly separate cultural spheres, so did the style. Black and white congregations today often have distinct preaching manners, service lengths or theological focus.

Christians may visit other churches to try out different worship styles, but the numbers show that they rarely forget their race when doing so. And unlike with education, there has never been a national push to integrate American pews, though the social implications of segregated churches might be just as severe.

For Emerson, the consequences are clear and dire. In an email he wrote, “Integrated congregations would dramatically alter the overall racial conversation. There will be no racial healing in this nation as long as we have racially divided churches.”

The issue is not going totally unnoticed. Although progress has been modest, there has been increasing efforts to change the uniform churches since 2000. That year, the Evangelical Covenant Church, for example, pledged to support clergy and congregations in creating diverse congregations, and in 14 years has gone from being essentially an all-white denomination to 27 percent of their nearly 1,000 congregations being racially diverse or non-white, according to Emerson.

And perhaps one of the most beautiful examples is happening right now, in the heart of Ferguson itself.

Rev. Willie Johnson, whose congregation at the Methodist-identified Wellspring Church has been front and center in the unrest and turmoil in the area, oversees a community that is about 70 percent black and 30 percent white. He says it’s only becoming more diverse.

Johnson says in the past few months, many white individuals from the community, “have intentionally made their way to [the] church,” to show that as Methodists, they have a religious affinity with one another deeper than race, and that Ferguson need not be a racially divided place.

As Johnson says, “We didn’t put up a sign, we didn’t market ourselves as a mixed race church. It just fell into our laps.”

A critical component of creating a unified community, he believes, is shaking up the variables by which people naturally gravitate towards one another. The racially separate church, he said, “is a byproduct of a very human reality, which is that we are always going to gravitate and associate with those with which we share affinity and affection, in thought and deed and culture, and while that is not solely defined by race or ethnicity, in this country those have historically been the standard.”

Beyond religion, what else can be more binding than race?

“I’ve pastored at affluent churches,” Johnson said, “and the cultural anchor is their affluence, not their ethnicity.”

Similarly, he believes his area of north Ferguson County can transcend race because of socioeconomic similarities, particularly meaningful in a congregation where few people “aren’t a paycheck or two away from hitting the welfare line.”