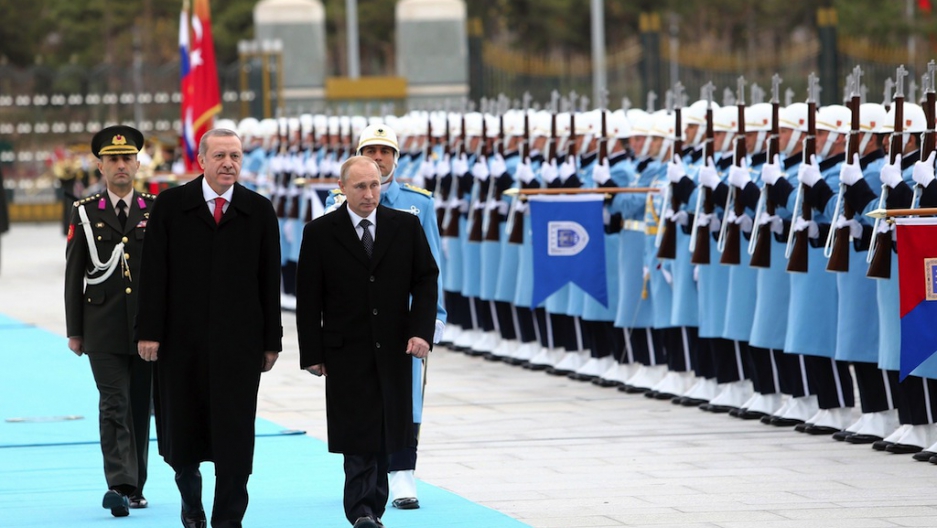 On the day before NATO foreign ministers met in Brussels, Belgium, this past week to re-affirm their unity and determination in the face of Moscow's aggression in Ukraine, the Russian president was enjoying a red-carpet welcome in the country with NATO’s second-largest army.

"This visit by Putin is a clear sign of the progress in relations between Turkey and Russia,” Turkish President Recep Tayyip Erdogan said Monday. “Our political will to increase our trade volumes to $100 billion is still valid."

Photos of Putin inspecting an honor guard of Turkish troops in their sky-blue coats, offers of cut-price Russian energy exports, and a commitment to help Turkey — a key NATO ally — become a hub for Russian gas sales were perfectly timed to undermine NATO's show of unity the following day.

"Talks during my state visit to Turkey were held in an exceedingly friendly and cooperative atmosphere," Putin crowed at a joint news conference following the meeting in Erdogan's lavish new palace in Ankara.

Putin's Turkish trip is the latest move in what Western defense officials view as a concerted and multi-pronged Russian offensive to undermine Western resolve over Ukraine.

More from GlobalPost: The Kremlin is loving the Ferguson riots

The Kremlin's tactics include the diplomatic and economic wooing of more receptive Western governments like Turkey's; outreach to friendly political forces (see recent revelations of Russian funding for France's far-right National Front party); an expensive multimedia propaganda campaign; and attempts to undermine moves toward the West by nations just beyond NATO's eastern fringe, like Serbia and Moldova.

It's an approach that is bearing fruit.

"There are people in our countries, and legislators too, who do not see Russia’s actions in Ukraine as a threat to our interests or security," British lawmaker Hugh Bayley told parliamentarians from NATO nations last month. "Some are lured by Russia’s lies and propaganda. Others want to bury their heads in the sand."

Erdogan, upset with criticism from his country’s European and North American allies over his heavy-handed rule and unpredictable foreign policy, was glad to find a friend in Putin.

"It's a reflection of deteriorating ties with the West," says Amanda Paul, an expert on the region at the European Policy Center, a Brussels-based think tank. "[The West is] pushing Turkey into the arms of other countries and one of those countries is Russia, which doesn't criticize Turkey over democracy, human rights, civil liberties, etcetera."

For Putin, the Turkey visit ticks a number of boxes.

It builds economic ties with a neighbor who has refused to sign on to international sanctions against Russia. The trip was a nice platform for slamming the European Union — and for sowing division among European nations by announcing he's pulling out of a major pipeline designed to take Russian gas into EU markets.

That stunned Italy, Austria, Slovenia, Bulgaria, Serbia and Hungary, who had hopes of profiting from the South Stream pipeline's route through their territory.

Putin invited them to vent their anger at EU headquarters, which has sought to restrict plans to give Russian's energy giant Gazprom a monopoly on use of the pipeline.

He had a particular message for Bulgaria — a country with close historic and cultural ties to Russia — which joined the EU in 2007.

"Bulgaria is deprived of the opportunity to act as a sovereign nation," Putin said. "Direct revenues to Bulgaria’s budget alone (from the pipeline) would have been no less than €400 million ($492 million) a year, but ultimately, this is also the choice of our Bulgarian partners; it seems they have certain obligations."

That's talk that resonates in Bulgaria — the EU's poorest member, where pro-Russian politicians were quick to blame the government for sacrificing the national interest under pressure from the EU and United States.

"Bulgaria had a chance to win back its energy independence," said the Socialist Party’s Rumen Ovcharov, speaking to Russia's new Sputnik media operation. "The country's leadership acted inadequately and foolishly. And, unfortunately, Bulgaria emerged as a loser."

Across Europe, the Kremlin has been building a network of political allies, notably among parties on the far right and radical left that are opposed to the EU and have risen to prominence in several countries during the union's long economic crisis.

Le Pen is an outspoken critic of the West's support for Ukraine, wants France to resume the sale of high-tech warships to Moscow, and describes Putin as a role model.

More from GlobalPost: France is a mess, and Europe is worried

"I admire his cool head," she told the Euronews TV channel this week. "There is a cold war being waged against him by the EU at the behest of United States, which is defending its own interests. I admire that he has managed to restore pride and contentment to a great nation."

While other far-right parties in Europe have denied receiving money from Moscow, they do express ideological kinship with Putin's macho nationalism.

"Russia represents the future," says Matteo Salvini, the leader of Italy's Northern League. Currently his country’s second-most popular politician, Salvini has been invited to the Kremlin to meet with Putin, which whom he shares a dislike of the EU and a penchant for posing bare-chested.

Several European parties on the far right and left have cemented their support for Putin by acting as observers in elections and referendums organized by pro-Moscow groups in bits of Ukraine they've seized.

But Russia isn’t only focusing on the extremes.

The Kremlin has also cultivated influential sympathizers among European business leaders and prominent members of mainstream parties in countries like Germany, Hungary and Italy.

Another strand of Putin's strategy is to reach out directly to European public opinion, with a propaganda blitz designed to sow doubt about Western condemnation of Russia's actions in Ukraine and other neighboring states.

Russia is pouring money into the Sputnik multimedia operation launched last month and headed by ultra-nationalist TV presenter Dmitry Kiselev, who earlier this year warned Americans that Russia had the power to turn their country into "radioactive dust."

It opened a dedicated British channel, RT UK, in October, an online German channel in November, and launched an aggressive advertising campaign that suggests the Iraq War could have been avoided if people had listened to its broadcasts.

Increasingly, Western officials are calling for a communications counter-strike.

"The best counter to Russian disinformation is the truth," Alexander Vershbow, NATO's Deputy Secretary General wrote in a recent online debate. "NATO has improved its ability to get the facts out via traditional and social media, but I agree we can do better. This will be a priority."