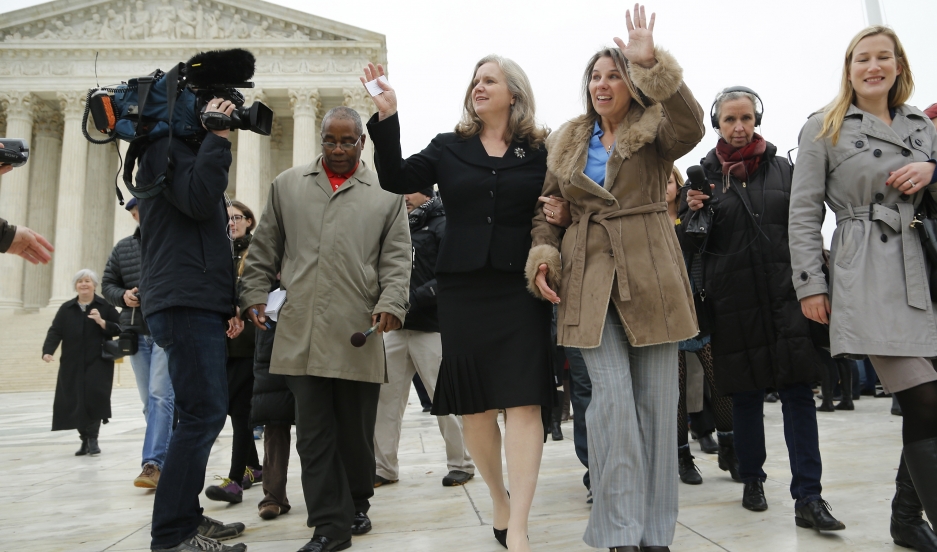 Peggy Young (3rd R) and her attorney Sharon Gustafson (4th R) wave to supporters as they depart the US Supreme Court building on December 3, 2014.

The Supreme Court heard arguments this week in Young v. United Parcel Service, the case in which Peggy Young, a UPS driver, sued the company for allegedly discriminating against her because she was pregnant.

Young became pregnant after getting in vitro fertilization treatments in 2006, and asked for a light duty assignment under a program UPS has in place for other workers. But despite obtaining a note from her doctor advising her — as most pregnant women are advised — not to lift more than 20 pounds, the request was denied.

Young took leave without pay for the next six months, unwilling to disregard her doctor's orders. She also lost her medical coverage before having her baby.

So, in 2008, she sued the company under the Pregnancy Discrimination Act. Gillian Thomas, an attorney and author of the forthcoming book, Because of Sex, says the law has a clause requiring employers to treat pregnant women who need accommodation the same way that they treat employees who are similar in their ability or inability to work.

But "employers have sort of fumbled with this requirement,” she says. “The issue that has been brought forward by this case is what exactly is a worker who is similar to a pregnant worker?”

Thomas already believes that, in American workforce culture, "the ideal worker is the only kind who's welcomed" and that extenuating circumstances in employees' lives aren't tolerated well.

That ideal worker, as she puts it, is "someone who is able to come in at 9 am and leave at 5 pm; never needs to take time off for kids; never has a need for their work space or their work hours to be altered in anyway. Employers view any deviation from that — whether it’s people with caregiving responsibilities or physical impairments — as burdensome.”

That's despite the fact that available research suggests providing accommodations for workers to stay on the job actually increases retention rates, morale and productivity.

Yet pregnant women seem to face an extra layer of scrutiny and stereotyping. UPS policy did allow accommodations for three different categories of workers, but none of these categories included pregnant women like Young.

“I think what we’re running up against in this case are stereotypes about pregnant women that are deep-seated and go beyond the physical repercussions of pregnancy,” Thomas says. “There’s a notion that having a child makes you a less committed worker, both in terms of your commitment to putting in the hours and staying in the workplace for many years.”

The Pregnancy Discrimination Act was passed to eradicate these stereotypes, but Thomas says they're still alive and well, a troubling notion given that about 85 percent of women will be pregnant at some point in their working lives

“Women experience a vast array of physical complications from pregnancy, even a ‘healthy’ pregnancy, that are going to be interfering with job responsibilities,” says Thomas. “It’s a conflict between stereotypes that we have about mothers and their abilities, and the reality of a physical event that is major and one that most women will experience.”

But Thomas points to the Americans With Disabilities Act as proof that society can shift its attitudes.

“I think that thinking and that shift needs to occur with pregnancy,” Thomas says. “The best hope that the litigants have in this case — the petitioner, Ms. Young, and her lawyers, and advocates supporting her — is to focus the court on the legislative history of the Pregnancy Discrimination Act, which was passed 36 years ago. Its promise has never been fulfilled.”