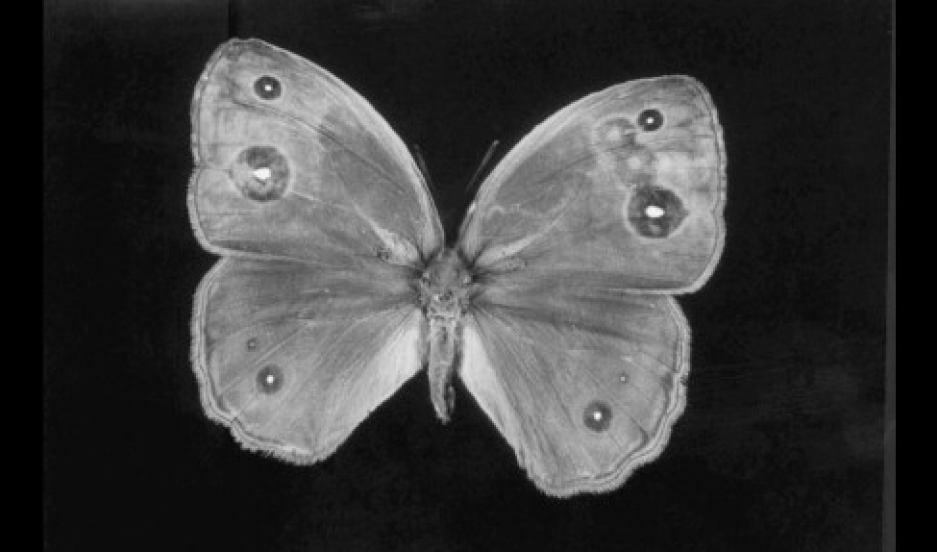 Artist Marta de Menezes creates one-of-a-kind butterflies by probing cocoons with a hot needle to create asymmetries in the butterfly's wings. The insects are not genetically modified.

“I believe that art, science, and technology as we know them today will disappear. They will fuse into a third culture, in which what I call “art-sci” will become known simply as “art,” leaving the door open for the next, and as yet unimaginable, avant garde.”

This is the thesis put forth by Arthur I. Miller in his new book Colliding Worlds: How Cutting-Edge Science Is Redefining Contemporary Art. Miller is a professor emeritus of history and philosophy of science at University College London,

“Art-sci is a 21st century art movement in which art, science and technology are merging,” he says. “Art-sci produces works that radically differ from anything that has gone before, and so it has every right to call itself the new avant garde.”

Miller says “art-sci” began in Manhattan at 4th Avenue and East 10th street in the early 1960s — “Montmartre come to New York City,” he calls it. It was the haunt of creative artists Robert Rauschenberg, Robert Motherwell, Andy Warhol, John Cage and Jean Tinguely. While artists before them, from Leonardo Da Vinci to Picasso and Dali, were influenced by the ideas of science, Miller says, these artists wanted to use both the ideas and the media of science and technology.

A “critical mass” was formed in 1966, when Billy Klüver founded Experiments in Art and Technology, Miller says. Klüver was a scientist at Bell Labs in New Jersey, part of the old American Telephone and Telegraph company’s innovative research establishment. "He decided it was time for a large-scale collaboration between scientists and artists," Miller explains. "He rounded up thirty scientists from Bell Labs, brought them down to the East Village and hooked them up with ten artists."

“The upshot was nine evenings of theatre and technology, which was an enormous success.”

Artists began to realize that the new media gave them the opportunity “to explore the age-old themes of emotions and nature using methods that went beyond paint and chisel,” Miller explains. Out of this emerged fields such as media art, robotic art, electronic art and data visualization art, in which artists use algorithms to mine huge caches of data and represent them aesthetically.

In his book, Miller cites one example of data visualization art called “Flight Patterns” by Aaron Koblin, the director of the Creative Arts Team at Google. Koblin’s piece is a visual representation of 250,000 airline flights across the United States on August 12, 2008. It is an installation of “continually emerging patterns.” “Koblin told me adamantly, ‘I make art with data,’” Miller says.

Biology-influenced art is another exciting line of research, according to Miller. It focuses on “the radical changes human bodies will undergo in the 21st century.” One famous — or infamous — example was an installation by artist Eduardo Kac using a live rabbit named Alba.

Kac injected Alba with a green fluorescent protein from a jellyfish. When blue light shines on this protein, it glows green, as did Alba — although Kac’s results and methodology have since been brought into doubt. Katz’s goal, Miller says, was to provoke debate about the ethics of gene therapy, “of genetically engineering living organisms to produce organisms that did not previously exist.”

Then there’s Stelarc, a performance artist who focuses on body enhancement. He has what looks like a third ear implanted in his arm. “It’s not really an ear, like on your head,” Miller points out. “It’s Stelarc's stem cells, woven into a biodegradable polymer frame that is embedded in his arm, that continues to grow into the shape of an ear.”

Stelarc had a hole drilled in his arm, into which will be placed a Bluetooth device to connect Stelarc to the web. The work asks the question, What will bodies be like in the 21st, 22nd and 23rd century. “We will have more and more chips implanted in us, and probably in the end we’ll all sort of be like Robocop,” Miller says

The reaction in the art world to the new movement has been “all over the place,” Miller adds. He is reminded of the situation in 19th century Paris, when the work of “radical” artists like Renoir, Manet, Monet, Toulouse-Lautrec and others was refused by establishement art galleries. These artists opened their own art galleries, among them one called Salon Des Refusés — Salon of the Refused.

“What people are worried about is, Will painting go away,” Miller says. “Well no, it’s always going to be there; there will always be painters. But I think the center of gravity will change more towards this new art-sci movement.”