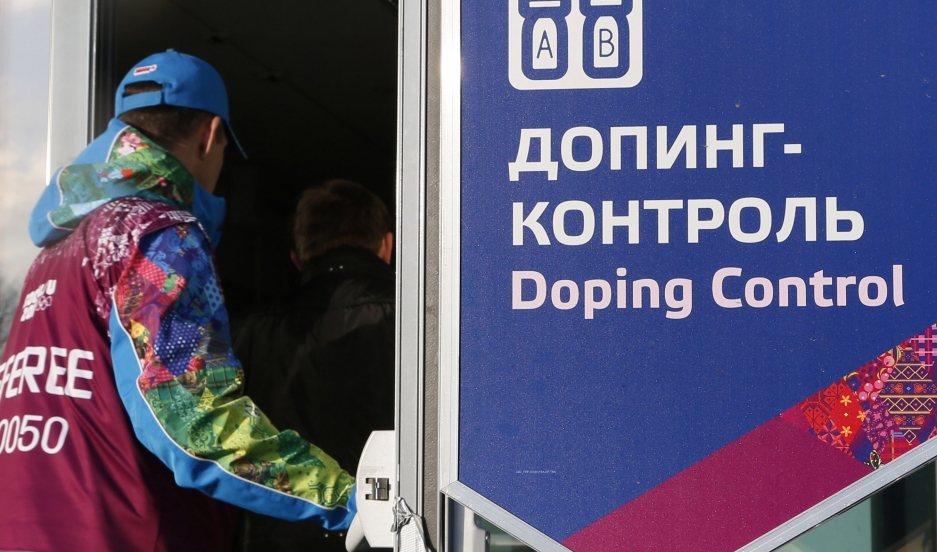 A staff member enters the doping control center at the Laura Cross Country and Biathlon Stadium at the Sochi 2014 Winter Olympic Games on February 21, 2014.

The documentary includes footage secretly taken by a former Russian anti-doping official and his athlete-wife, reports the German media outlet Deutsche Welle. Russian officials fiercely deny the charges, with one calling them "laughable."

International sports officials are taking the allegations seriously and have already launched investigations. Russia has been dogged by doping claims recently and foreign officials in September banned athletes from using xenon gas to get an edge after allegations of widespread use by Russian athletes during the Sochi Olympics.

One of Canada's newest national parks is in the far northern reaches of Labrador, home to one of the world's largest land mammals: the polar bear. On a recent Sierra Club expedition there, one of the participants ended up in the mouth of a hungry polar bear.

VICE reports on the expedition and says changing climate conditions are bringing polar bears into increasing contact with humans. In previous decades, fewer than one polar bear attack on a human was reported each year. Now that number is between three and four.

In the past month, two US grand juries have declined to indict police officers accused of killing Michael Brown in Ferguson, Missouri, and Eric Garner of Staten Island, New York. That has some scratching their heads ... over why the US has held onto the grand jury system it inherited from England, when most other countries have discarded it.

Like in other former British colonies, the US judicial system is based on English common law. Through the years, the UK exported grand juries to countries around the world. But the US is virtually the only country that still uses secret hearings to determine if someone should stand trial. PRI's The World talked to London-based legal writer Joshua Rozenberg about why even the Brits abolished grand juries more than 80 years ago.

In comes a tiger and there goes the neighborhood

Residents of Talawade in India are up in arms after wildlife officials released a young male tiger. The animal is believed to have killed a woman and is said to be prone to chasing cars. Officials released the tiger into a wildlife preserve near Talawade.

The wildlife officials had tried to release the tiger into another sanctuary, but were foiled by local residents who didn't want the potentially dangerous tiger lurking nearby.

The Guardian reports on the controversy and on claims that the tiger will be trapped again and placed in a zoo. So far, though, no one has apparently ordered the recapture and the big cat has supposedly become suspicious of traps and may be harder to catch.

Rebecca Dopart met and married her husband while serving in the Peace Corps in a small Polish village in the 1990s. Shortly after they got married, her husband's father died and Dopart accompanied her husband as he shaved and dressed his father's body for the funeral. She was shocked.

It was all so natural, Dopart says, that it changed the way she views death. She says the Poles have "a very emotionally mature way of seeing death as a part of life; of seeing the body for what it is and what it isn't.” Dopart told her story to PRI's To The Best of Our Knowledge, as part of a special series about death and dying.

Weather could be a problem for Friday's second attempt to launch the Orion spaceship on its test mission 3,600 miles above the Earth. According to AccuWeather, low clouds and a chance of showers during the early morning launch window could force NASA to postpone its launch, once again.