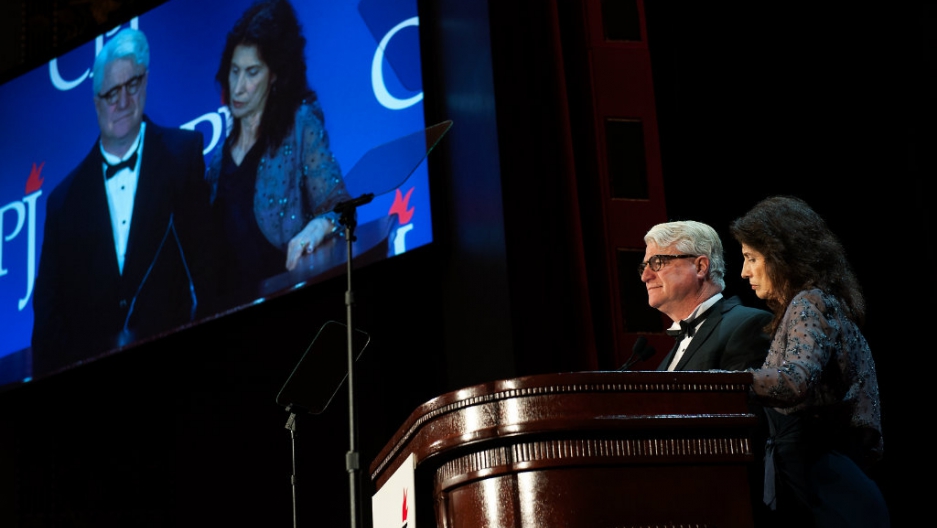 John and Diane Foley (left to right), the parents of James Foley, speak at the Committee to Protect Journalists International Press Freedom Awards at the Waldorf Astoria on Nov. 25, 2014 in New York City. The CPJ is one of a number of global journalism groups dedicated to making reporting in the field safer for freelancers and reporters worldwide.
Credit: Bryan Thomas
Share

Update [12/6/14]: American freelance photographer Luke Somers, 33, was reportedly killed during a raid by US commandos early Saturday on an outpost of the Al Qaeda-affiliated group that has been holding him for over a year. This was reportedly the second failed attempt to free Somers. The New York Times is reporting that a second hostage, South African citizen Pierre Korkie, was also killed in the raid.

The war on journalism continues.

On Thursday, Al Qaeda’s Yemen branch published a video of a man identifying himself as Luke Somers, 33, a freelance photojournalist who was reportedly abducted in the capital of Sanaa last September.

In the video, a member of the group, Al Qaeda in the Arabian Peninsula (AQAP) – which has fueled its operations through millions of dollars in ransoms received for European hostages, US security officials say – attacks US foreign policy.

The man featured in the video also issues a stark warning: "We give the American government a timeframe of three days from the issuance of this statement to meet our demands about which they are aware; otherwise, the American hostage held by us will meet his inevitable fate.”

On the same day, news emerged that Iran’s judiciary has extended Washington Post reporter Jason Rezaian’s pretrial detention for another two months while he remains in solitary confinement inside the notorious Evin Prison, which is controlled by Iran’s hard-line Revolutionary Guards. Rezaian, a dual Iranian and American national, has been detained for more than four months without any formal charges.

Human Rights Watch (HRW), the Committee to Protect Journalists (CPJ) and other advocacy organizations have called for his immediate release: “If authorities had evidence that Rezaian has committed a real crime, they should have charged him shortly after his arrest,” said Sarah Leah Whitson, HRW’s Middle East and North African Director. “At this point, they should simply release him.”

Before joining the Washington Post, Rezaian was a freelance contributor to GlobalPost in 2010. He was a courageous and insightful journalist who was fascinated by the story of Iran. We met on several occasions in Boston and he often said that he was aware of the perils of reporting in Iran, but felt compelled to tell the story. Rezaian is among 41 members of the media who are currently incarcerated in Iran, according to the Paris-based Reporters Without Borders.

Rezaian, like many correspondents in the region, was keenly aware of Iran’s history of arresting and detaining Western journalists. In June 2009, Iason Athanasiadis filed written dispatches and photo essays for GlobalPost during Iran’s street protests. He was detained at the airport, arrested and held for three weeks in Evin Prison before we were able to work with his family and friends to help secure his release. NPR’s Roxana Saberi and Newsweek’s Maziar Bahari were also detained and eventually released.

The steady pace of arbitrary arrest and detention as well as the kidnappings and beheadings of American freelance journalists James Foley in August and Steven Sotloff in September has galvanized the global journalism community. A group of international news editors, journalists and advocates representing the Committee to Protect Journalists, Reporters Without Borders, the Overseas Press Club, the International Press Institute, The Frontline Club of London, The GroundTruth Project and others, have dedicated ourselves to a shared commitment to standards for safety for journalists in the field and to draw on lessons that need to be learned.

A draft document, which we have been passing around and working to finalize, is intended to clarify a new set of shared expectations and responsibilities for news organizations and field correspondents – whether staff or freelance or local hires – in a time of unprecedented peril.

At the CPJ annual dinner last week, Alberto Ibargüen, president and CEO of the Knight Foundation, delivered a powerful address on the reality journalists are facing these days.

“There is a new war on journalists,” said Ibargüen, one that is producing unprecedented casualties.

The years 2012 and 2013 amounted to the worst two-year period on record for the CPJ: 144 journalists were killed and some 200 more were behind bars at any given time.

So far in Syria, 73 journalists have been killed. More than 90 have been abducted since 2011, of whom 20 are still missing, the CPJ estimates.

“Not just new battles, but an entirely new war … a 21st century war, with blurred geographic lines and intense digital media. Terrorists are the shock troops in this new war. They are not like the old censors. Today’s terrorists will kill a journalist not to stop a story, but to create one. They recruit in social media. They practice press release by execution,” Ibargüen said.

“They see traditional media struggle to adapt to the new digital age. They see the number of well-resourced international correspondents dwindle. They seek to exploit those weaknesses and they prey on the freelancer and the local reporter,” he said.

We are both sobered and saddened by this steady drumbeat of horrific news about our colleagues trying to do their jobs. We realize that the rules of field reporting, particularly in places such as Iraq and Syria, have radically changed.

But we are also inspired by the lives of these colleagues, by their passionate commitment to telling stories in the under-covered corners of the world and to bearing witness to people, the non-combatants, who suffer the most in any war.

Their work – our work – as journalists is necessary and invaluable, and never before has it been so relentlessly under attack.