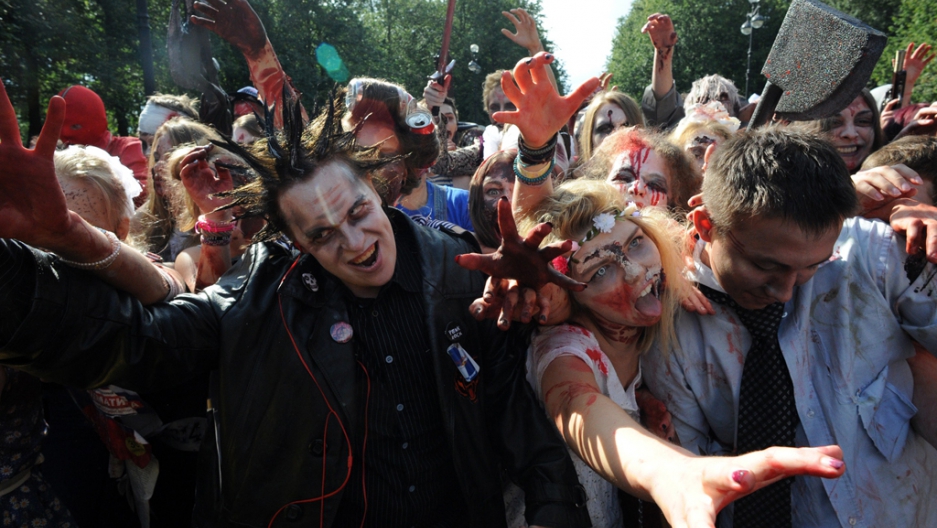 People dressed up as zombies take part in a Zombie Walk at the central park in St. Petersburg on Aug. 16, 2014.
Credit: OLGA MALTSEVA
Share

Ukraine appears to be in the throes of a media crisis, not just with Russia but within its own borders. First, it created the Orwellian-sounding Ministry of Information Policy this week, worrying some journalists about new potential for censorship, as Kyiv-based Christopher Miller reported for Mashable.

Then on Wednesday, activists dressed as zombies protested in front of the Ukrainian broadcasting department, calling for Russian television shows to be taken off the air. But why zombies? GlobalPost's senior correspondent Dan Peleschuk explains the symbolism:

Many Ukrainians might complain that Russians have been "zombified" or brainwashed into supporting the Kremlin's aggressive Ukraine policy ... so these kids are playing around with that theme while protesting against the broadcasting of Russian TV shows in Ukraine, which are still fairly common. The Ukraine authorities have already banned, on-and-off, a slew of Russian channels from cable networks for beating the war drum over eastern Ukraine.

Here's a video of the protest, via Ukrainian National News:

The Kremlin recently stepped up its game in the information war against Ukraine and the West by launching "Sputnik," a global expansion of its state-run media brand. GlobalPost's Peleschuk wrote last month that the service has "a heavy online presence and dozens of multimedia hubs scattered throughout world capitals, [and] the well-funded project is also slated to begin radio broadcasting next year in 30 languages for over 800 hours a day."

He added: "Its aim is to change what you think about Russia."

Not if the zombies have their way...