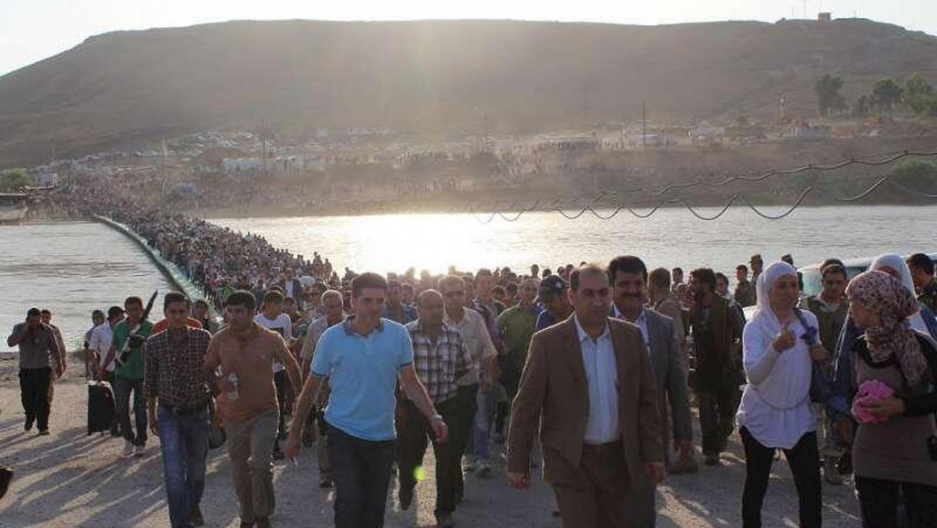 It's been a long year for humanity. There's been Ebola, the ongoing Syrian civil war, the crisis in eastern Ukraine, the rise of the Islamic State in Iraq and Syria, the Gaza war, Boko Haram, the disappearance and probable murder of 43 students in Mexico, and more.

We hear that 3 million Syrians have fled their country's civil war and another 6.5 million are internally displaced, but what can we do? We know that Ebola has killed 6,000 people, almost all of them in West Africa, but if we're not one of the very few people in the world who have the medical training and bravery needed to travel to the heart of the outbreak, what is our role in the picture?

Making a cash donation is the easiest thing you can do and it's also the most effective, according to USAID's Center for International Disaster Information. And there's no better time than today, because today is Giving Tuesday, a charitable answer to Black Friday and Cyber Monday.

If you decide to support a charity on Giving Tuesday, it's hard to figure out which places are reliable. Luckily, there are online resources like Charity Navigator, which rates charities based on their effective use of donations, accountability and transparency, and sustained commitment to their campaigns. The ratings don't factor in things like religious affiliation — some of the most highly rated charities have stated religious missions — so you should check whether a particular charity conflicts with your beliefs or values.

With so many crises — both accute and simmering — around the world, one easy charitable approach is to donate to large, highly rated charities with major global reach. So if you give $10 is might help fight Ebola in Liberia, or feed Syrian refugees in Turkey, or support maternal health in Afghanistan.

Here are charities that do some of the best work battling world's biggest problems, according to two major monitoring groups:

Kurdish children sit around a fire outside a tent in the Rojava refugee camp in Suruc, Sanliurfa province, near the besieged Syrian town of Kobani, also known as Ain al-Arab, on Oct. 26, 2014.

Mission: "Save the Children invests in childhood – every day, in times of crisis and for our future. In the United States and around the world, we give children a healthy start, the opportunity to learn and protection from harm. By transforming children's lives now, we change the course of their future and ours."

A refugee from eastern Ukraine sits in a refugee camp near the Ukrainian city of Donetsk on Aug. 18, 2014.

"The International Rescue Committee helps people whose lives and livelihoods are shattered by conflict and disaster to survive, recover, and gain control of their future. IRC teams provide health care, infrastructure, learning and economic support to people in 40 countries, with special programs designed for women and children. Every year, the IRC resettles thousands of refugees in 22 U.S. cities.

The IRC was founded in 1933 at the request of Albert Einstein."

An Afghan health worker administers the polio vaccine to a child during a vaccination campaign on the outskirts of Jalalabad on June 24, 2014.

"Our mission is to provide a preferential option for the poor in health care. By establishing long-term relationships with sister organizations based in settings of poverty, Partners In Health strives to achieve two overarching goals: to bring the benefits of modern medical science to those most in need of them and to serve as an antidote to despair."

Smoke rises in Azraq, Jordan as part of a fire drill on the opening day of the refugee camp.

"Catholic Relief Services carries out the commitment of the Bishops of the United States to assist the poor and vulnerable overseas. We are motivated by the Gospel of Jesus Christ to cherish, preserve and uphold the sacredness and dignity of all human life, foster charity and justice, and embody Catholic social and moral teaching."

"Direct Relief is a nonprofit, nonpartisan organization that provides medical assistance to people around the world who have been affected by poverty, natural disasters, and civil unrest. Thanks to generous material and financial contributions from individuals, pharmaceutical companies, and medical equipment manufacturers, Direct Relief can work with healthcare professionals and organizations on the ground and equip them with the essential medical supplies and equipment that they need to help people recover from a disaster"

Handprints and signatures of Ebola survivors decorate a board at the Doctors Without Borders)Ebola treatment center in Monrovia, Liberia.

"We are Doctors Without Borders/Médecins Sans Frontières (MSF). We help people worldwide where the need is greatest, delivering emergency medical aid to people affected by conflict, epidemics, disasters or exclusion from health care."

A member of the aid agency Oxfam places a rose by a temporary gravestone in a demonstration against the war in Syria on the sidelines of the Geneva II peace talks in Montreux, Switzerland, on Jan. 22, 2014.

"Oxfam America is a global organization working to right the wrongs of poverty, hunger, and injustice. As one of 17 members of the international Oxfam confederation, we work with people in more than 90 countries to create lasting solutions. Oxfam saves lives, develops long-term solutions to poverty, and campaigns for social change."

Syrian Kurdish children stand on Oct. 22, 2014 outside a tent in the Rojava refugee camp in Suruc in Sanliurfa province.

"The U.S. Fund for UNICEF supports UNICEF's work, and other efforts in support of the world's children, through fundraising, advocacy and education in the United States."