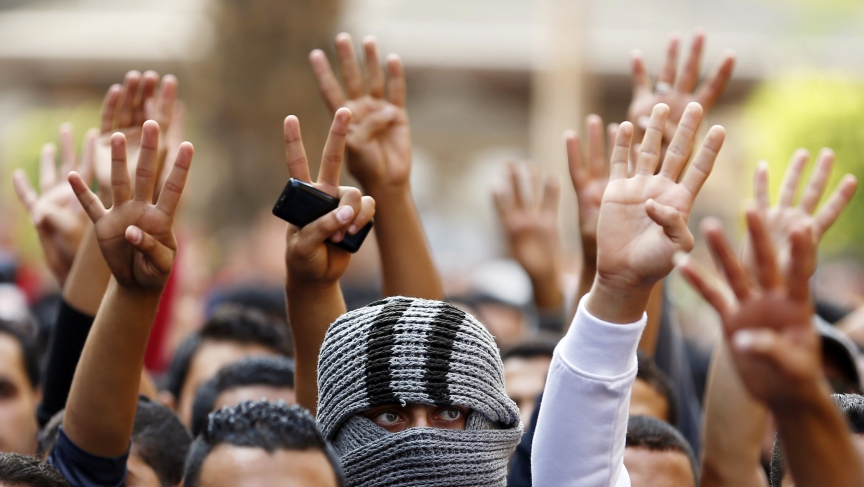 Cairo University students shout slogans against the government and flash the "V" and "Rabaa" signs, protesting the release of former Egyptian President Hosni Mubarak's. Protests erupted at universities across Egypt on November 30, 2014, in response to the ruling.

Egypt's four-year-long political roller coaster continued on Saturday when the country's highest court threw out all criminal charges against Hosni Mubarak, the autocrat who ruled Egypt for 30 years before stepping down in the face of protests in 2011.

That news sent protesters back into the streets, with between 2,000 and 3,000 people marching in the streets of Cairo protesting the decision. Two of the marchers were killed as police attempted to clear Tahrir Square on Saturday night, using water cannons, tear gas and buckshot.

“This was a spontaneous protest,” says Heba Moyaref, the senior Egypt analyst at the International Crisis Group. “It wasn’t pre-planned by activist groups. It was simply a reaction of rage, of outrage, at the verdict."

She says Egyptians were shocked by the release of Mubarak, who faced charges ranging from corruption to the murder of protesters during the 2011 uprising. "When the cost of demonstrating is so high, with activists regularly being sentenced to five or seven years' imprisonment, I think that’s an indicator of just how shocking this verdict was," Morayef says.

There was even rare criticism of the verdict in Egyptian media, which is largely either state-owned or highly compliant with the current government, led by ex-general Abdel Fattah el-Sisi. While much of the private media in Egypt is owned by businessmen ideologically aligned with Sisi, Moyaref says, “we’ve actually heard a lot of voices, including from the private media, saying that Mubarak was responsible for crimes, and should not have been acquitted.”

And while many Egyptians have also enthusiastically welcomed Sisi — and the return of the Mubarak-era security state — she says Mubarak's acquittal may be a step too far.