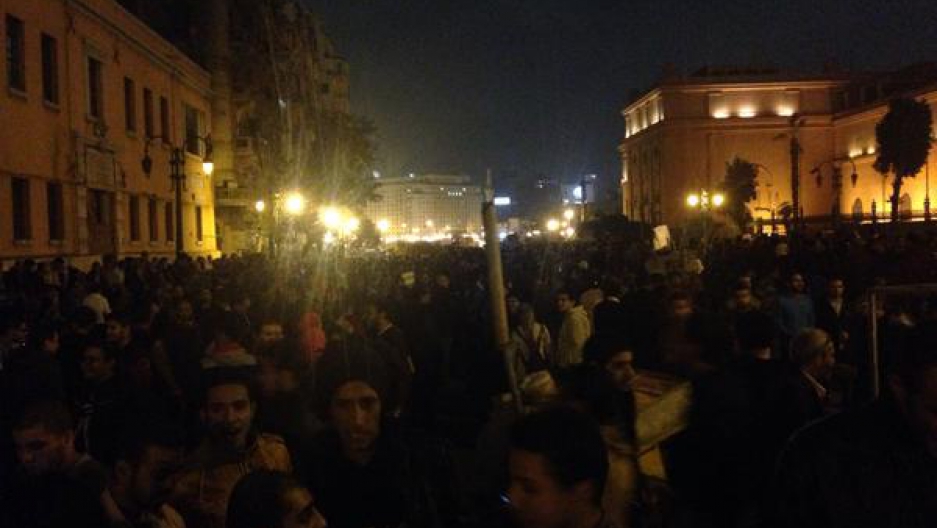 Protesters returned to Cairo’s Tahrir Square on Saturday, flouting a ban on protests, after an Egyptian court tossed out charges against ousted president Hosni Mubarak for the deaths of almost 900 protesters during the country’s 2011 uprising.

In an interview shortly after the court’s decision, Mubarak said that he did “nothing wrong at all.”

Charges were also dropped against senior officials in Mubarak’s government.

The former president was seen waving to his supporters from a stretcher as he returned to a Cairo military hospital. It is unclear whether or not he will walk free now, as he is presently serving a three-year sentence for embezzlement.

The decision triggered a wave grief and anger for opponents of Mubarak’s government, particularly the victims’ families.

“There is no justice for the poor,” Ramadan Ahmed, father of a man shot dead in Alexandria during the revolution, told the Associated Press. "This is Mubarak's law."

For some, the decision was the nail in the coffin for the Arab Spring — far from the optimism that gripped the country after the 18-day revolution brought an end to Mubarak’s 30-year rule.

I always hoped that it would matter if there were millions of witnesses to a crime of this proportion, but it doesn't.

#MubarakTrial is the eulogy of the Arab Spring

For others, it was to be expected.

To pretend that #MubarakTrial would end in any other way than this is to live in willful delusion. Eyes wide open, #Egypt. Regime is intact.

But in the hours following the verdict, protesters descended on Tahrir Square, just as they had done in 2011 during the revolution that removed Mubarak from power.

Large crowd now outside Tahrir. A couple thousand maybe. Ambulances nearby on standby.

With protests effectively outlawed in Egypt, it has been a while since crowds have been seen at Tahrir, which was the staging ground for the 2011 revolution.

Around a thousand people of outskirts of Tahrir right now - many clearly revelling in ability to mingle freely.

And despite the revolution, little has changed in the way the Egyptian authorities deal with protesters.