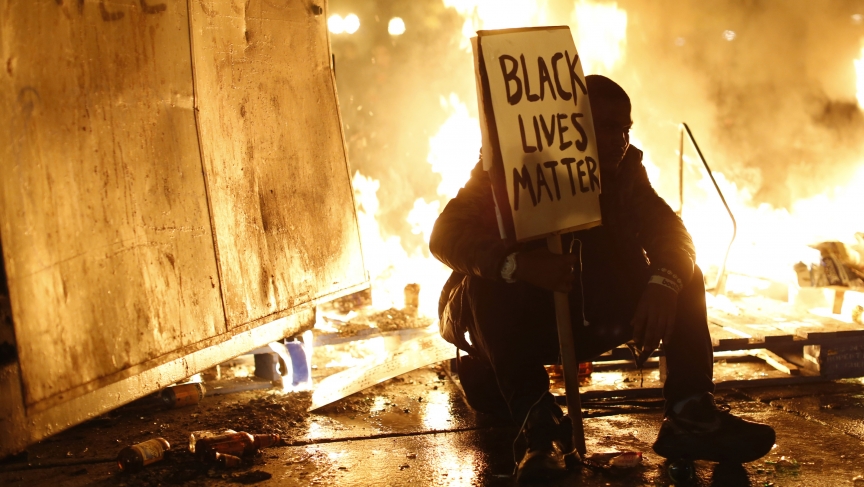 A demonstrator sits in front of a street fire during a demonstration following the grand jury decision in the Ferguson, Missouri shooting of Michael Brown, in Oakland, California on November 25, 2014.

"Ferguson burns, South Africa simmers: Why America is but a matchstick away."

That was the provocative headline from Richard Poplak’s story on Wednesday for the South African news site, The Daily Maverick. “Ferguson explains more about South Africa, and South Africa more about Ferguson, than anyone would like to admit. There are lessons to be found in the ashes,” Poplak wrote.

Police violence against black South Africans has been endemic for years, he says. One of the most recent examples was the death of 34 black miners who were killed by police officers during protests in the town of Marikana in 2012. “Many of these young men were shot in the back by the police while they were fleeing,” Poplak says, “That’s sort of South Africa’s watershed moment in a way.”

Though the circumstances were different from the case in Ferguson, the killings in South Africa highlights the anger many South Africans, particularly black people, feel about the way police officers treat them and their communities. Few police officers, black or white, serve time for police brutality, according to Poplak. None were indicted in the 34 deaths.

“Everybody who pulled the trigger, and all the people who backed them, have gotten away with it,” he says.

Even when brutality is caught on camera, as was the case when Andries Tatane was beaten to death by police officers at a demonstration three years ago, the evidence changes nothing.

“All of those policemen who beat him were easily identifiable," Poplak says. "None of them has done any time, none of them has been put before a judge. So I think South Africans are very, very familiar with what’s happened in Ferguson and certainly familiar with the feelings that have accrued around the whole Ferguson debate.”

The political contours of the problem are often similar, too. “We also understand the right-left dichotomy that’s going on, the debate on one side saying, ‘What are all these hooligans doing burning down this community? And besides Michael Brown had it coming, why would you mouth off to a cop?’" Poplak says. "Those debates happen all the time in South Africa."

Poplak says the situations in the US and South Africa should remind people that race issues are still major problems in both places; Nelson Mandela and Barack Obama haven't fixed much of anything in that respect.

“We’ve both had these vaunted and very powerful, post-racial narratives,” Poplak says. “We’re both supposed to be undergoing these post-racial Shangri Las where reconciliation is happening every day and our terrible institutionalized segregation is a thing of the past. Postracial what? There’s been no reconciliation; there’s certainly been no redistribution when it comes to wealth and real power in both countries.”

A previous version of this story incorrectly stated the race of the South African police involved in the shooting.