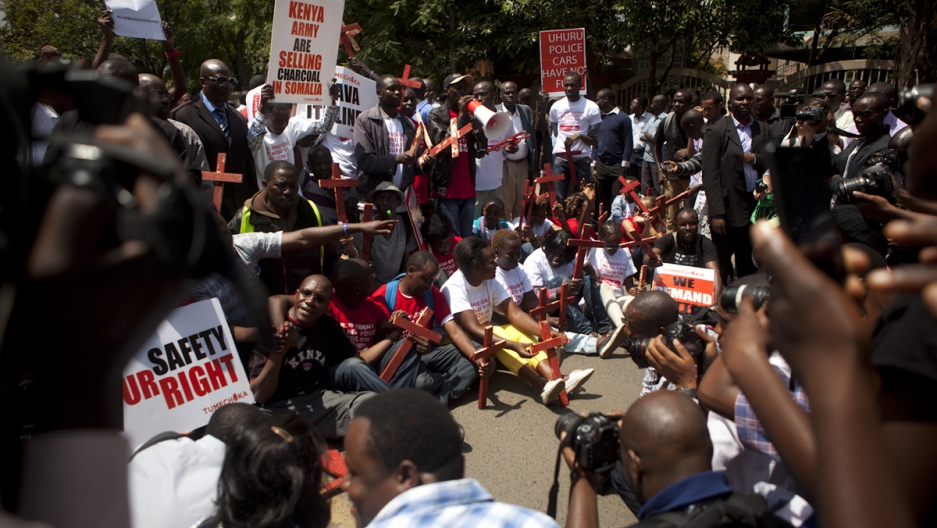 Protestors stage a sit-in in Nairobi against government inaction in the face of rising insecurity and terrorism.
Credit: Tristan McConnell
Share

NAIROBI, Kenya — Apathy and thuggery greeted an attempt to kickstart an Occupy movement in Kenya to protest against government inaction in the face of rising insecurity and terrorism.

The march and sit-in dubbed #Tumechoka, meaning “We are tired” in Swahili, was called on Tuesday after the execution of 28 people on a bus in Mandera in the far northeast of the country over the weekend.

That attack, claimed by Somalia’s Al Shabaab militants, left some Kenyans questioning their government’s capacity and willingness to prevent terrorism.

“The government does not recognize that this is a religious battle,” said Stephen Omodia, a 39-year-old businessman, who clutched a red-painted wooden cross in his hands to symbolize the lives lost in terrorist attacks in recent years.

In Mandera the gunmen separated people according to their religion before executing the non-Muslims. Omodia said the government must strengthen security before — not after — attacks, and hold talks with Muslim leaders.

Next to him Stephen Wachira, a 34-year-old driver, agreed the government was not responding adequately to the threat of insecurity and called for a change of leadership. “Innocent Kenyans are dying everyday. [Joseph] Ole Lenku must go,” he said, referring to Kenya’s interior minister.

Protesters march in Nairobi against government inaction in the face of rising insecurity and terrorism.

Protest organizer Boniface Mwangi, a photographer and activist, said the issue of insecurity cut across the political, tribal and religious divides in Kenya, and yet the turnout on Tuesday was derisory.

Perhaps 100 people wearing T-shirts with the slogan “Mr President We Need Your Action on Security” attended the protest on Harambee Avenue, a road that runs past government offices.

The crowd of onlookers was about the same size. “The problem is we live in an apathetic society,” said James Rogor, a 30-year-old activist who works for a film company. “People believe that if it’s not happening to them it doesn’t matter.”

Security sources say there have been 136 terrorist attacks in Kenya since 2011. Most affect poor and remote parts of the country and so are easily ignored by the political and social elites of Nairobi. The exception was the assault on Nairobi’s Westgate Mall in September 2013 which left 67 people dead.

The most exercised group at Tuesday’s protests were a couple of dozen aggressive, wild-eyed men carrying a banner declaring themselves “Young Kenyan Patriots.” They tried to break up the protest by charging through the small crowd, blowing whistles, smashing the wooden crosses and throwing a few loose punches as police looked on.

Activists muttered that they were “paid goons.” After an hour of disruptive antics they disappeared.

An anti-demonstrator swears at people holding an 'Occupy' protest in Nairobi against government inaction in the face of rising insecurity and terrorism.

As the protest in Nairobi struggled to gain traction, in Mandera the impact of Saturday’s attack was still reverberating. Six Kenyan unions advised their members to leave the area as hundreds of civilians sought shelter at a military airbase afraid that Al Shabaab may launch another cross-border raid.

Blood-red wooden crosses lie meant to represent the lives of those killed in acts of terrorist violence lie on the ground.
Protesters hold crosses aloft.