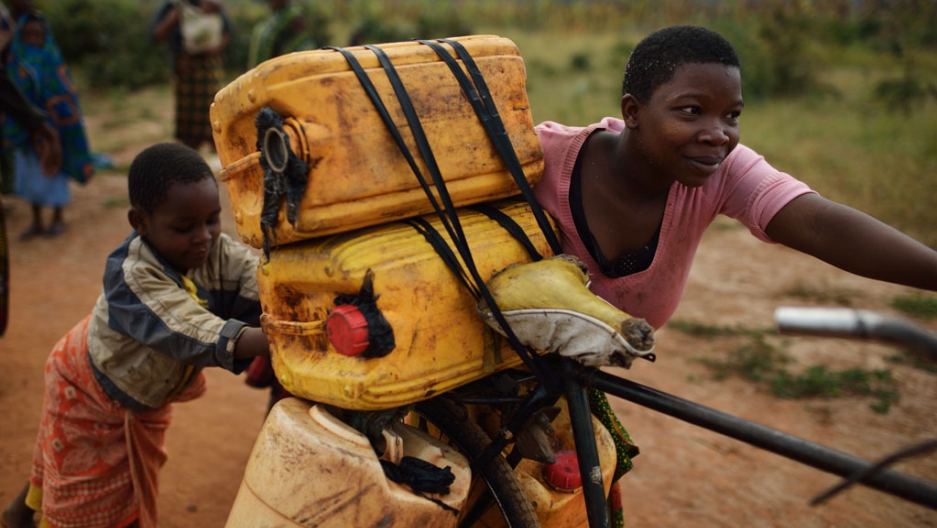 A women in the rural Tanzanian village of Mtumbatu pushes a bicycle loaded with water up a hill.
Credit: Shannon Jensen/The GroundTruth Project
Share

Editor's note: This is Part Two of a series produced by The GroundTruth Project for GlobalPost, funded by the Galloway Family Foundation. Part Three, which investigates the Tanzanian government's flawed approach to increasing water access, will be published on Wednesday, November 26.

LUPETA, Tanzania — It’s a full day’s bus ride from Dar es Salaam to the district of Mpwapwa in north-central Tanzania. It is here that the earliest signs appeared of trouble ahead for Tanzania’s ambitious water development program.

Engineers dug boreholes in 2004 and 2005 to get at water trapped deep in the ground in Mpwapwa and in 13 other places across the country in a precursory step of a failed $1.42 billion water initiative supported by the World Bank, known as the Water Sector Development Programme (WSDP).

The idea was to learn how expensive it would be to create functioning water points, how long they’d take to build and how best to establish “community water councils” capable of keeping the water flowing. Leaders would learn from mistakes on a few pilot projects and work out all the kinks before the plan went national. But critics say those lessons went unlearned.

The Tanzanian government launched the initiative in 2006, and the World Bank brought its hefty support in 2007. In that first phase, five water systems had been completed in Mpwapwa. Less than a decade later, three of them are not functioning, said village leaders. A fourth failed, too — it only resumed operation recently thanks to the emergency intervention of a private NGO.

And rather than seek a new model for ensuring that its rural water points don’t fail, the WSDP continues to forge ahead with the very same program that failed the villagers of Mpwapwa, including the farming community of Lupeta.

A World Bank spokesman in Washington said the initiative, to which the World Bank has contributed $200 million, did succeed in providing 8 million more people with clean water in rural areas. But due to rising population, the data still shows a slight decrease in the overall percentage of people with access to clean water.

This lack of access is evident on the ground. On small plots of land, the farmers of Lupeta grow corn, ground nuts and sunflowers. A typical family earns just about $212 a year from their crops, says village chairman Wilfred Msumu. On a dry year, even less. Since before Tanzania’s 1961 independence, these families had been making an hours-long trek to fetch water.

Then in the 1970s the government built pipes into the community from a faraway stream.

“It was not sufficient,” said Msumu, 67. The water flowed at a trickle, and what little did arrive had to be shared with another village. And so, most families went back to fetching water from afar.

When residents learned in 2004 they were slated to receive a brand new system — a WSDP pilot project — they were wary. But they rejoiced when the project successfully brought a source of water directly to the village.

“People were so happy they were dancing,” says Msumu. The new system delivered water right to the center of the village — reducing dozens of hours each family spent fetching water every week.

“That (extra) time we used for people to farm, for children to attend school instead of fetching the water,” says Msumu. “Children go to school for many more hours now, many more days.”

The water flowed for six, fruitful years. But then it slowed. “The place where they were building a new intake, the water was not enough,” says Msumu. Seven years after the system was built, the water stopped altogether.

“We had no water for nine months,” says Msumu. For the third interval since Tanzania’s independence, the residents of Lupeta “were going to another village, 10 kilometers (away), with a bucket on their heads.”

Msumu tried to raise money to build a new water intake, which an assessment by water engineers estimated would cost $92,000. The small fee of 20 shillings (about 1.2 cents) that community leaders had been collecting for each bucket of water consumed was not nearly enough.

He was unsuccessful in getting the Tanzanian government to make up the difference. At last, the private water relief NGO WaterAid answered the call, furnishing a $92,000 gift to build a new intake and replacing some of the old pipes.

But Lupeta is just one of many failures during the pilot program and Phase I of WSDP, according to Mpangala — and WaterAid is in no position to step in and fix every one.

An hour west of Lupeta in the village of Masagali, a brand new water storage tank cracked two years after the WSDP built it. Twice the community pooled together money to patch it. Eventually, they gave up. That was in 2008.

In the village of Chalodewa, East of Lupeta, an engine used to pump water broke down ages ago. It sits idle to this day. In nearby Seluka village, a borehole sits full of water —but there is no way to get it out. “Some pipes dropped into the hole,” says Mpwapwa District Water Engineer Simon Katiti. “They've been planning to fix that.”

But the community can’t. At least, not on their own.

Seven years after the official start of the WSDP project, communities across Tanzania are finding themselves unable to fix, operate and maintain what are sometimes incredibly costly water systems, built in places that are incredibly poor.

“The per capita income of these communities... they’re not able to meet operation and maintenance,” said Herbert Kashililah, chair of Water Witness Tanzania. He says some communities “do not even have the money to maintain a diesel generator.”

Today, it isn’t just the pilot projects that are faltering. In Goima, in Tanzania’s Northern Kondoa district, a pump-based system had been approved by the government and built under Phase I of the WSDP. On the day residents turned it on, it didn’t work.

“They tried to pump it and the water didn’t reach,” says Goyagoya Mbenna, a top engineer in the Ministry of Water’s Rural Water Supply bureau. “The pumping head was too long.”

“The Minister (of Water) himself told us to intervene,” says Goyagoya, who was assigned to redesign it himself. He decided on an “in-line boosting system,” a pump to make the water go further using an electric generator or solar. Fortunately, the local government was able to pay for the fix. But not all local governments are so lucky.

Near the city of Mtwara in the county’s south, one project had a series of flaws. “It didn’t include the other villages on the line, the feasibility study was not done well. When we told him (the contractor) to redesign, (but) he didn’t agree — he was already paid,” he says.

Again, the Ministry of Water is redoing the project.

In Rukwa, also in the South, only one project out of 10 that were due by this June has been constructed.

“Nine had a lot of technical problems. So we have to redesign all of them,” says Goyagoya. “The costs were not realistic. In many of these cases had they done it in-house the value for their money could have been more” had they relied on government experts instead of contractors.

But by design, even the smallest water systems planned under the WSDP were to be contracted out.

“We were thinking the private sector would take care of maintenance and the communities would pay back the private companies,” says Goyagoya. “But what we have found is that even the private contractors are not aware of how to maintain these systems.”

Goyagoya argues that the WSDP should not be judged by the failures of communities to maintain the projects.

“When the pilot projects were completed, it was still early to learn about the maintenance,” he says. “But during the implementation of WSDP, we came to learn that sustainability of the projects under the private sector was not sustainable.”

To bureaucrats far away in Dar es Salaam, these challenges seem stubborn, out of reach, even incomprehensible. To the people of Mpwapwa, they are real, and current:

“I cannot wash our clothes, I cannot cook anytime I want because I must spend time going to the well,” said Hawa Jacob, who lives in the village of Masagali where a WSDP tank sits cracked and unusable.

The 29-year-old spends one hour every morning walking to a far away well, carrying a 20-liter bucket of water back on her head. Her two children — ages 8 and 6 — carry 10 liters each, about 22 pounds.

Jacob recalls fondly the days when the water did flow — when she and her family could use as much as they wanted, without having to spend all morning carrying such heavy loads. She laments that the WSDP built project amounted to nothing. She insists that it isn’t too late.

“The World Bank should fix it,” she says. “Because it’s their project that isn’t working.”