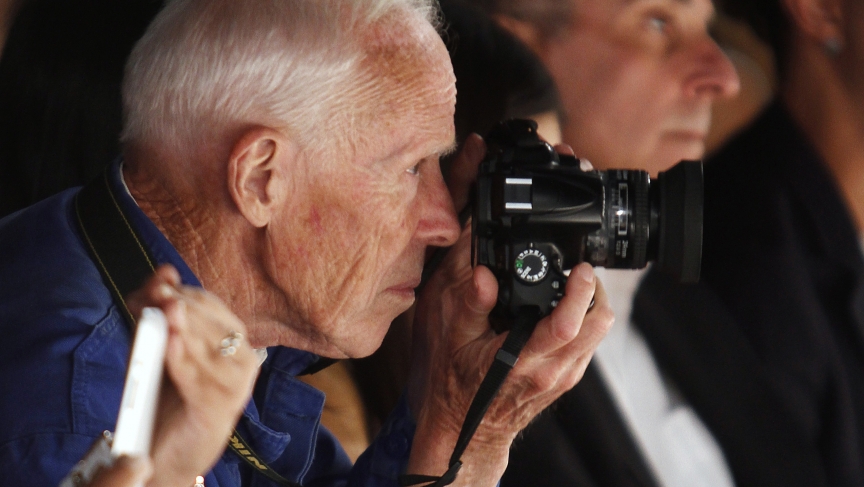 One of our favorite photographers is Bill Cunninghamof the New York Times. You can see his work every Sunday in the "On the Street" column, where he surreptitiously shoots the latest streetwear trends in New York City — even though he's now 85.

Cunningham was the subject of a 2010 documentary called Bill Cunningham New York, which revealed the photographer as a charming, dedicated and altogether humble man.

You also learn that Cunningham is completely devoted to shooting on film; he still keeps filing cabinets full of negatives in his apartment. That makes it all the more surprising to discover that Cunningham has an Instagram account, which shows off moments like this one from Paris Fashion Week:

It's actually Cunningham's assistant, John Kurdewan, who runs the account, but he fills it with outtakes and images of the master at work. There are shots of Cunningham laboring over his "On the Street" spreads, printing photos and laying them out by hand:

You can also see him on his omnipresent bicycle, which he wheels around the city to do his shooting:

@workforbillc is a fascinating peek behind the scenes at one of fashion photography's most beloved figures, a good-natured guy who always seems to be wearing a royal blue jacket and a smile. That's well worth a follow in our book.

This blog post comes from Sideshow, a new podcast from PRI's SoundWorks network that looks at the intersection of culture and technology.