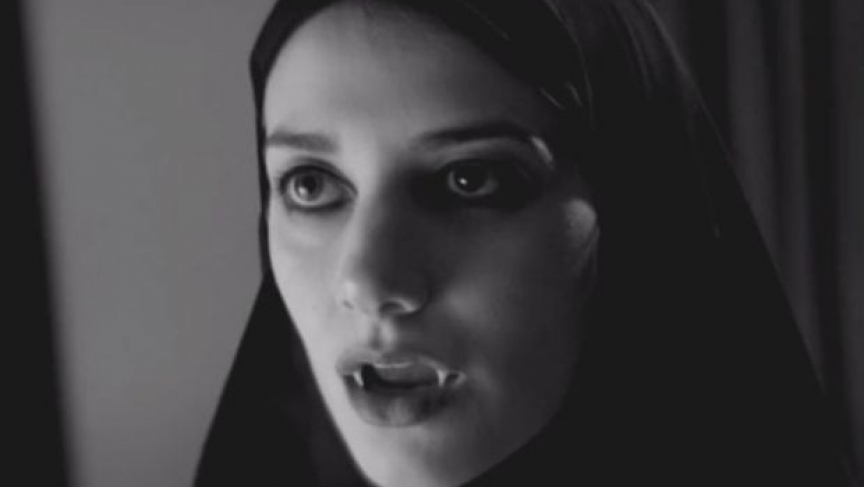 A still from the film "A Girl Walks Home Alone at Night."

As a film, A Girl Walks Home Alone at Night takes pride in defying expectations.

Set in the fictional Iranian town of "Bad City," it is shot completely in black and white, and is entirely in Farsi. It's a vampire movie, but it's also a spaghetti western. And its main character is a shy girl who looks more like Amelie than a blood-sucking monster. When she's not terrorizing the town's junkies, pimps and creeps, she listens to brooding music in her bedroom and skateboards around town.

Shooting a genre movie in black in white and in a foreign language all sound like bad business, but the film's producer, Elijah Wood, said they were the features that attracted him to the project.

“All of these elements were maybe things that would have scared other people looking to invest in something from a commercial standpoint, but for us, it was absolutely everything that we wanted to be a part of," Wood told VICE.

Throughout the film, director Ana Lily Amirpour features oil fields and drills — a symbol that takes on several meanings.

“The [oil] industry is something that I find extremely seductive, familiar, and parasitic, but not in a negative way,” says Amirpour. “We seem like ants so often, and there’s something about these ever-churning oil rigs, refineries, and smokestacks — it’s almost like they’re consuming the Earth like it’s food.”

Like an oil rig, a vampire needs to sink its teeth in to its food and drink. An Iranian-American herself, Amirpour says that she’s loved vampires since she was 12.

“A vampire can be so many things, and it’s a really powerful mythical character,” she says. “It’s life eternal, darkness. It kills as part of its instincts. It’s also a historian, observing decades of human history.”

Amirpour says that the main character of “The Girl,” who is played by actress Sheila Vand, is an outsider because she’s a vampire that is living a life that is unique and independent from the rest of the culture.

“I’m very intimate with and close to loneliness,” she says. “I think loneliness gets a bad rap. I think solitude is extremely useful for a person to think about themselves and find things. Certainly for creativity it’s key, and it also makes those moments of connection really jump out and feel undeniable.”

The film relies heavily on the use of music to help support and tell the story laid out in “A Girl Walks Home Alone at Night,” and the soundtrack was composed of mostly Farsi and English songs by Federale, Kiosk, White Lies, Bei Ru, Radio Tehran, and others.

Check out a trailer for the film: