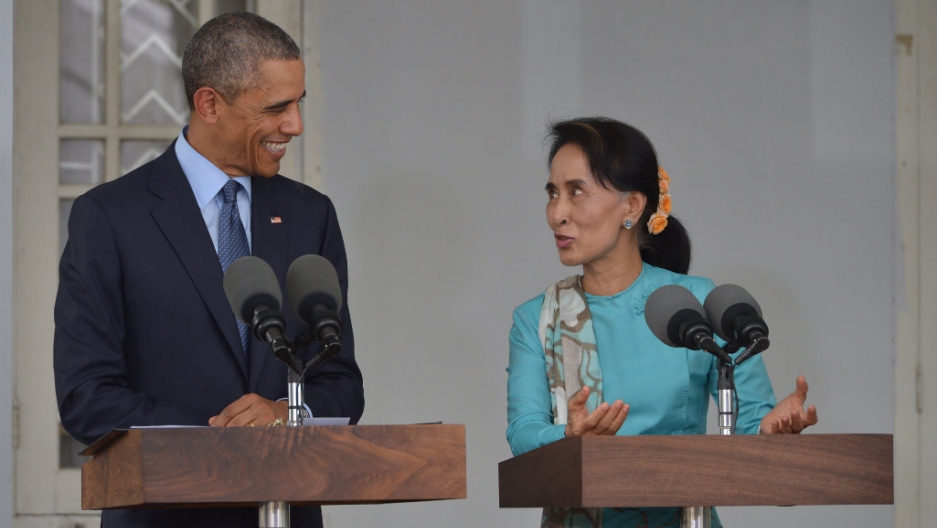 US President Barack Obama and Myanmar's opposition leader Aung San Suu Kyi speak during a press conference at her residence in Yangon on Nov.14, 2014. Obama began talks with Suu Kyi in a show of support for the opposition leader as the nation turns towards elections next year with uncertainty over the direction of reforms.
Credit: MANDEL NGAN
Share

As fledgling leaders, President Barack Obama and Aung San Suu Kyi both expressed confidence they would “get things done” by reaching out to those who wished them ill. The very titles of their respective memoirs — Obama’s “Audacity of Hope” and Suu Kyi’s “Voice of Hope” — suggested a heady confidence rooted in a belief in the essential goodness of human beings and a limitless possibility when people work together.

In their meeting in Myanmar, both leaders sought from one another and from supporters a realistic assessment of the present and reasonable expectations going forward. It left those of us who study styles of leadership asking whether their earlier optimism was folly or insight.

In the early days, both leaders overestimated the power of reason in political life and underestimated the venom of their opponents. So, too, did their followers.

In Grant Park in November 2008, the moment CNN called the election for Obama, the vibration literally shook the ground as a quarter of a million people exhaled. The scene evoked belief in hope even more than victory, and when the President-elect spoke, he echoed the sentiment of the crowd: “And where we are met with cynicism and doubts and those who tell us that we can’t, we will respond with that timeless creed that sums up the spirit of a people: Yes, we can.”

For five years, I have been studying Suu Kyi for a book on women who fight for human rights. On Nov.13, 2010, like most “Burma-watchers,” I stayed up most of the night to watch as thousands gathered outside her home to wait for her to return to her “place”— the wall where, when not confined, she would speak of democracy and freedom. Because foreign journalists had been banned from Burma that month, the videos that sprang onto the web were fragments captured by hand-held telephones. All was euphoria.

On the streets of Myanmar more recently, people told me she had inspired them on a daily basis for 26 years. During the 18 years Suu Kyi was under house arrest, the individual mantra of “I can” echoed across the country and became a “we can” that carried the people during very dark days.

No one leader could fulfill all those hopes. Even if they were not confronting men whose sole purpose was to make them irrelevant, they live with constraints of time and place, and their personal limits.

Of the two, Suu Kyi’s situation is the more dire, for those who hate her have gone as far as to attempt to assassinate her and to write into the constitution an article to block her from running for the highest office. Yet while less violent, Obama’s problem — an opposition leader whose Republican Party is explicitly dedicated to his failure — similarly requires making a nation’s well-being secondary to the venal aspirations of his opponents in the Congress.

Obama and Suu Kyi have at times gotten their own ways, although excess optimism led them to overestimate their personal capacities.

In 2012, for example, Suu Kyi thought it was an honor to be named to chair a committee that was investigating citizen protests about a copper mine. It was a setup. After diligent study, she announced the foreordained conclusion — one sure to inflame the residents and damage her credibility: the mine should continue operating, despite damaging the environment and producing few jobs for the local economy. A more skeptical eye would have advised her to decline the chairwoman’s post from the outset.

On a parallel track, Obama turned his back on last-minute election maneuvers. Instead of responding quickly and clearly, he allowed himself to be defined as personally responsible for Ebola and ISIS. Absurd accusations, but ones that hurt him and his party.

This week’s news shows both leaders emerging chastened and strong — though no longer universally beloved by those who once cheered. At a joint press conference, each announced results of months of negotiation, and meeting halfway with those whom they deal.

Suu Kyi leaked news that the head of the Lower House of Parliament had closed discussion of a bill concocted to reduce the predicted landslide of her party in the 2015 elections. Obama announced that through months of planning and negotiation, the US and China have a joint plan to reduce carbon emissions and curb green house gasses.

These accomplishments represent the best of optimism — the will to try, the intelligence to frame the issues persuasively and the energy to persist.

To be sure, both Obama and Suu Kyi remain vulnerable to discouragement among their supporters and to the continuing rancor of their enemies.

But their appearance together in Myanmar left no doubt that neither will cede the field. Standing side by side at the press conference as two veterans of political wars, they spoke openly of the importance of optimism as they understand it now — hopefulness veined with skeptical regard — about prospects in Myanmar as well as worldwide.

That lesson may have displeased those who continue to hope for more, but it explains their deepening relationship and their renewed energy.

As individuals, both Obama and Suu Kyi are sometimes called arch, or cool. They are often accused of being too much alone. There was none of that on display as they shared the spotlight with ease. At the meeting’s end, they walked arm in arm.

In this they illustrate what research shows: Blind optimism or wishful thinking is folly; hopefulness rooted in intelligent scrutiny, resourcefulness and courage is key to effecting change.

Susanne Dumbleton is professor emeritus and former dean of DePaul University School for New Learning. She is studying Aung San Suu Kyi as part of a larger project on women as leaders of social justice.