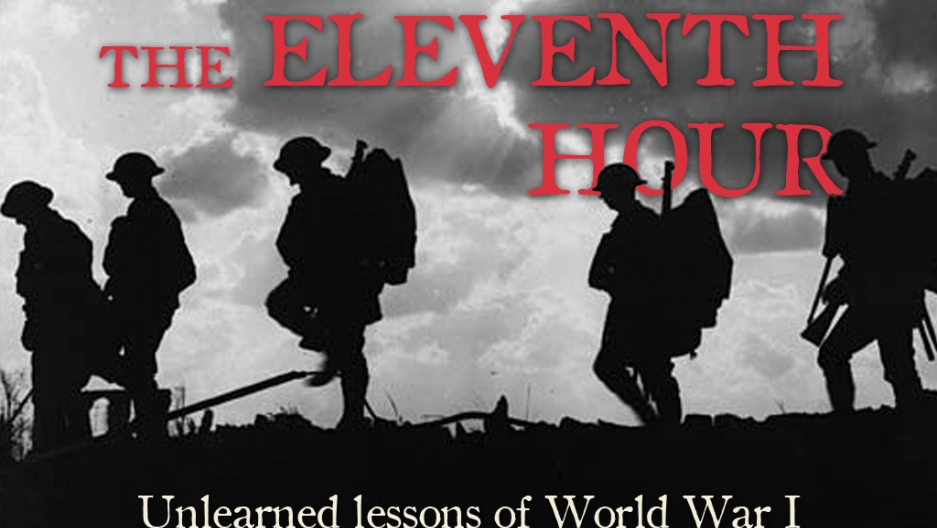 JERUSALEM — One hundred years on, and the trench lines are still there, carved with shovels and pickaxes into a rocky hillside overlooking the ancient walls of the holy city.

It was here that the Ottoman forces first dug in against advancing British army regiments under the command of General Allenby during World War I, which began in 1914 and lasted four long years. During that time, nearly 20 million soldiers and civilians were killed, 65 million troops were marshaled to war and three empires were toppled, including the Ottomans.

The “war to end all wars,” as the Great War was called, has instead become a war that has never ended. The lines and boundaries that were drawn on the world map in the war’s aftermath continue to define contemporary conflicts from Iraq to Nigeria and simmering hostilities from Northern Ireland to Bosnia.

But no single city held more emotional and sacred power in the First World War than Jerusalem, a power that still resonates and still stirs conflict — fueled by violence like the attack on a West Jerusalem synagogue Tuesday that killed four worshippers and one police officer, injuring several others.

Jerusalem, the powerful emotion it stirs and the violence from which its residents so often suffer, is impossible to understand without understanding its history. Where one starts along Jerusalem’s timeline quite often defines one’s understanding of the place, and the boundaries one draws around it.

For Jews, it is the seat of the ancient temple and the Western Wall is the sacred touchstone to that past that dates back more than 3,000 years. It is where Jesus of Nazareth preached, where he gathered his disciples for the Last Supper, where he was crucified, and, as Christians believe, where he rose again. For Muslims, it is the place that holds the rock from which the Prophet Mohammed ascended to heaven.

This overlapping sacred space of Jerusalem has made it a coveted city throughout history, violently contested time and time again since at least the Crusades. The fighting continued through World War I and in the 1948 and 1967 Arab-Israeli wars and in the two decades of violence that have spiked there amid the lifeless Israeli-Palestinian “peace process.”

The Tuesday attacks on ultra-Orthodox worshipers, which claimed the life of Moshe Twerksy, the descendant of towering Jewish rabbis and philosophers, came after rising tensions between Israelis and Palestinians and marked the worst day of violence in Jerusalem in years.

With this renewed violence falling on the 100th anniversary of World War I, it is worthwhile to look back at the role the war played in defining the modern conflict over Jerusalem.

WWl trenches in the Jerusalem Forest in Jerusalem. (Heidi Levine/GlobalPost)

Back then, the defeated Ottomans were not just surrendering the holy city, which they had ruled for some 400 years, but also losing the Dome of the Rock, the third-holiest shrine in Islam. And for the British Empire, its European allies and all of Christendom, the reclaiming of Jerusalem was a triumph like no other in a global war that had largely stalemated in the trenches of France.

British General Edward Allenby was told by Prime Minister Lloyd George to conquer Jerusalem as a “Christmas present” for the people of Britain. On Dec. 11, 1917, Allenby rode his horse to Jaffa Gate, dismounted and walked in to claim victory as church bells rang out. Not since the Crusades had a Christian country proclaimed control over Jerusalem.

For the nascent movement of Zionism, the post-war British Mandate over Palestine and Jerusalem held out a promise of a Jewish state in the future where Jews would finally return to the site of the ancient Jewish temple from which they were expelled. It was a promise that was given shape in the form of a declaration made by British Foreign Secretary Arthur Balfour in a letter to Lord Rothschild, a leading Zionist.

For the Arab leaders and their armies who had fought alongside Sir T.E. Lawrence — Lawrence of Arabia — the so-called “Balfour Declaration” was seen as a double-cross, a betrayal of an agreement two years earlier that Britain would recognize the independence of Arab states and that the holy places would remain under the control of an “independent, sovereign Muslim state.”

The contradictory promises made by the British to Jews and Arabs during and after World War I set the stage for a battle over who will control the overlapping sacred space of Jerusalem. It was a bitter dispute left unresolved by two Arab-Israeli wars, decades of violence and seemingly endless attempts to breathe life back into the Oslo Peace Agreement which leaves Jerusalem as a so-called “final status” issue.

To this day, Jerusalem remains a flashpoint at the center of the peace process.

The remnants of the Western Wall of the Second Temple of Judaism rise up to the Haram al-Sharif, or Noble Sanctuary, where the Dome of the Rock and the Al-Aqsa mosque form a compound. Just on the other side of the compound is the Church of the Holy Sepulcher, where Christian tradition holds that Jesus was crucified and buried. If there was thermal mapping of sacred space in the Abrahamic faith, this cluster of stone buildings and shrines would be burning bright red.

Israeli settlement expansion in and around East Jerusalem, which is traditionally Palestinian, is intended to secure boundaries of the municipality that will leave Israel in control of the city. The settlements are always a spark that can ignite conflict. Israel sees Jerusalem as the eternal, indivisible capital of the Jewish state. The Palestinians and their leaders see East Jerusalem as occupied land since 1967 and the place where they will have the capital of their future state.

The US like nearly all nations places its embassy in Tel Aviv, taking the official position that the status of Jerusalem must be decided through negotiations by the two sides.

In late October the battle over sacred space erupted when Israeli police tried to block Muslims from attending prayer services at the Al-Aqsa Mosque which Palestinian President Mahmoud Abbas called “a declaration of war.” The move followed the shooting of Rabbi Yehuda Glick, a right-wing activist for Jews’ right to pray at Al-Aqsa, allegedly by a Palestinian suspect who was later shot dead by police.

The tensions have been simmering in Jerusalem for the last two months with many observers fearing that a third intifada, or Palestinian “uprising” against Israeli occupation, is about to erupt. That is, if it has not already.

The violence is still about boundaries and about who will control Jerusalem, just as it was during World War I when the Ottomans were dug in around Jerusalem and the British forces were advancing.

High on a grassy slope of Mount Scopus, overlooking the old city and all this sacred space, lies a Commonwealth War Cemetery, one of several scattered across this divided land in Gaza and in Har Megiddo, or the biblical site of Armageddon. Here in the Jerusalem War Cemetery, there are graves for some 3,500 soldiers who fought in World War, their white, marble headstones laid out in straight rows.

On a sunny day in October, Eron Tearosh, the head of Jerusalem’s Great War Heritage Society, walked through the rows touching the stones, reflecting on the meaning of the war.

He said, “There is a resurgence of interest in the war on this 100th anniversary. It’s dawning on all of us in this part of the world that the history surrounds us. Anyone who knows the history of the war, understands how relevant the lines and boundaries of that conflict are today and understands the fear that history seems to be repeating itself.”

GlobalPost Co-founder Charles M. Sennott is the head of The GroundTruth Project, based at WGBH. From 1997 to 2001, Sennott was posted in Jerusalem as the Middle East Bureau Chief for The Boston Globe. He recently returned on a reporting trip as part of a six-month reporting project titled “The Eleventh Hour: Unlearned Lessons of World War I.”

This story is Part Five of "The Eleventh Hour." See the rest of the series:

Part One: Why World War I still matters, 100 years after it began