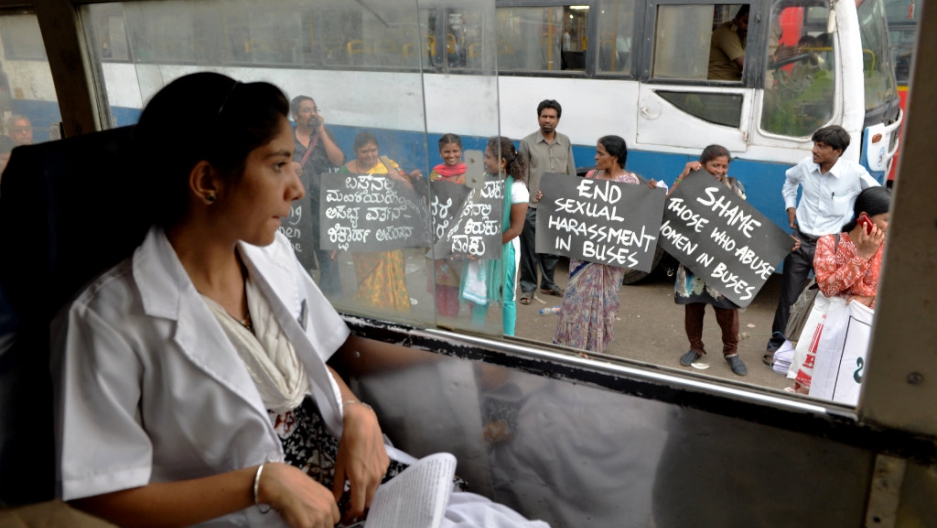 Indian protesters belonging to the Bangalore Bus Passengers Forum hold placards against the sexual harassment of women passengers,at a Bangalore Metropolitan Transport Corporation (BMTC) bus stand on Oct. 7, 2013. According to a survey by the forum conducted from 2012-13, two out of three women who travel in BMTC buses face regular violence from co-passengers, drivers and conductors with 1803 cases booked against them.
Credit: MANJUNATH KIRAN
Share

LONDON — After the brutal rape and murder of a woman on a bus in Delhi two years ago, the debate about safety in public places has continued to rage unabated. In Detroit, a man shot a woman to death on the street for rejecting his advances and refusing to give him her number. Another man in Queens, New York slashed a woman’s throat when she refused to engage with him. And more recently, a viral video showed the world what it was like to simply be a woman and walk the streets of New York.

Women’s safety in public transit — an under-researched area — is becoming a rallying point for women, and was the subject of two panels at the Trust Women conference in London this week. Just a quick look at the hashtag #EverydaySexism, a repository that documents the near-constant verbal and physical assault of women in public places, shows that the issue is a huge and systemic global problem.

“Feeling safe affects decisions about mobility and decisions about what [women] do and do not do, even traversing their own neighborhoods,” said Priya Nanda, the director of the social and economic development group at the Delhi-based International Center for Research on Women (ICRW).

Lower income women, and specifically women who work late at night, are especially dependent on public transit. Billions of women are in a near-constant state of fear of harassment on a daily basis around the world.

A majority of women who are harassed on public transit are on their way to a destination — heading to the office, picking up the kids or going to get groceries, according to surveys by Project Guardian, an initiative by Transport for London and the British Transport Police that aims to curb harassment of women on public transit. Victims are therefore often too busy to stop and file a police report, or even call the police, when they are groped on the subway.

This happens so often that women consider these events “normal" and shrug them off the best they can, as there is little realistic recourse, said Laura Bates, founder of the Everyday Sexism Project and an advisor on Project Guardian.

"I know [sexual assault] can happen so I never wear a really short miniskirt or high heels," said a Parisian women who called herself Julie in a story by the Thomson Reuters Foundation. "I know we're better off than in some cities, but you still have to pay attention. I know I can't count on other people."

The problem is bad enough that some cities are considering segregation: Mexico City, Jakarta and Tokyo, recently ranked as some of the worst in the world for safety for women’s safety, have been experimenting with single-sex bus carriages and transit. But experts at the Trust Women conference believe this idea will do little to address the root of the issue, and is a stop-gap that won’t be effective.

"The emerging interest in several countries in women-only initiatives should be seen as an opportunity for improving security in cities but not as a silver bullet for dealing with gender-based violence in transportation and urban settings," Julie Babinard, senior transport specialist from the World Bank, told the Thomson Reuters Foundation.

The situation is improving in other places. For instance, a Thomson Reuters Foundation poll released last month found that New York is one of the safest places in the world for women on public transit. London is also beginning to implement ways to combat regular sexual assault, as well as to track and convict perpetrators.

The best way to keep women safe in public, however, is to change people’s perspectives on the issue, Bates said. Street harassment of women in public — which can include groping, verbal taunts and physical intimidation — needs to stop being part of the culture, she said. For that to happen, she added, cities must put women at the center of the conversation.

“Street harassment also has to be put into the sphere of violence against women and inequality,” Bates said during a panel at Tuesday’s conference. “Many women feel that they can’t react or can’t say anything to fight back, for fear that they will be punished in some way for doing so.”

One way of doing that, she noted, is to address the lack of trust in law enforcement, especially among those in the LGBT community. That means teaching responding officers to instill a sense of confidence in the victim, regardless of whether or not what was being reported amounted to a crime, Bates said.

Through Project Guardian, London has also implemented a text alert system so that women on the go, or those who are too afraid to make a call, can still make a complaint and feel empowered to say something about facing harassment. Similarly, posters that were planned with the phrase “sexual assault” had little impact, as many women didn’t consider what was happening to them “assault” per se. Instead, more specific signage about groping and touching was used.

The result has been a 26 percent increase in reporting of sexual offenses on public transit.

“We believe that a few simple steps could be easily introduced to reduce the chances of women becoming victims of sexual violence,” wrote Thomson Reuters Foundation CEO Monique Villa in an op-ed in the UK-based Independent that applauded the Project Guardian idea. “Women, like men, have the right to feel safe and to live freely in their cities.”