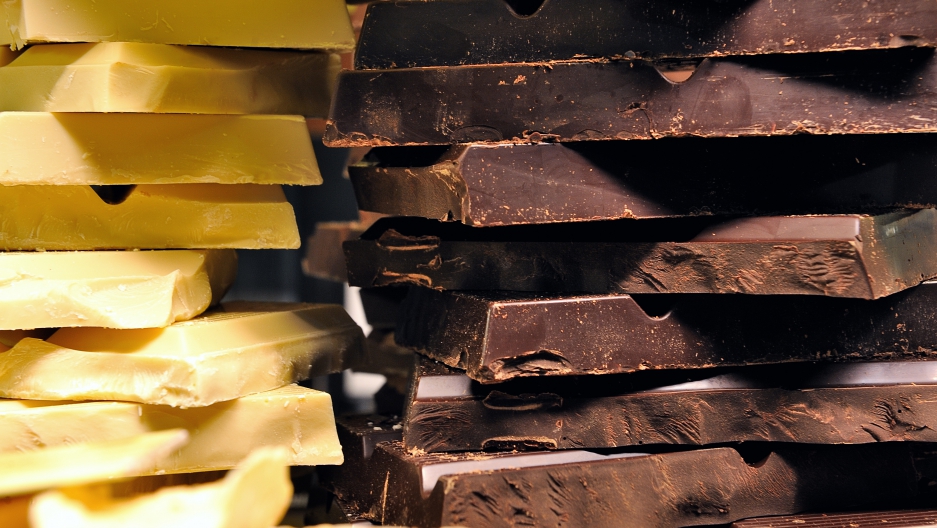 White and black chocolate bars are displayed at a stand as part of the 'Salon du Chocolat' (chocolate fair) on March 9, 2012, in Lille.
Credit: PHILIPPE HUGUEN
Share

Humans are to blame for 90 percent of the greenhouse gases driving global warming. The polar bear population in the southern Beaufort Sea has dropped by 40 percent. The pacific bluefish tuna — one you sushi enthusiasts are likely to miss — is headed toward extinction. Droughts are turning California into one huge desert.

All signs point to a pretty terrifying future for the world if scientists' warnings about climate change continue to fall on deaf ears.

But now, it looks like our inability to address climate change adequately might cost us one of the world's most pure, innocent, and wonderful pleasures: chocolate.

According to Barry Callebaut Group, the world's largest chocolate manufacturing company, our growing love for chocolate might mean "a potential cocoa shortage by 2020."

The numbers prove it: last year, chocolate consumption exceeded production by 70,000 metric tons, and that deficit is predicted to increase to more than 14 times that amount by 2020. The demand has meant a soar in cocoa prices — which have shot up by 60 percent since 2012. The Switzerland-based company is one of a growing list of chocolate makers warning about the possible end of cocoa confections.

But the shortage isn't just about the world going crazy for chocolate — it also has a lot to do with climate change. A decrease in cocoa supplies can be pinned on West Africa's dry weather, which is only getting worse. In Ghana and Cote d'Ivoire — responsible for more than 70 percent of global cocoa supply — a study released by the International Center for Tropical Agriculture predicts a 2 degree Celsius (3.6 F) increase in temperatures by 2050. Higher temperatures mean that more water evaporates into the air from leaves and earth, leaving less behind for cocoa trees — a process called "evapotranspiration."

There's also a fungal disease called "frosty pod," which has ravaged between 30 and 40 percent of the world's cocoa production. Brazil, once the world's second largest exporter of chocolate, is now its biggest importer, after being hit with "witch's broom," another fungal disease that devastated the Brazilian state of Bahia in 1989.

Increased difficulties in growing cocoa will only mean that farmers turn to different, more profitable crops.

Just last week, China (which has seen a huge jump in chocolate consumption) and the US signed a deal agreeing to bring down carbon emissions, and President Barack Obama stressed the urgency of addressing climate change during the weekend's G20 summit. Here's hoping that we can reverse the already worrying impact of climate change — after all, it would be especially terrifying to live through it without chocolate.

Correction: An earlier version of this story misstated the Fahnrenheit conversion for the 2-degree Celcius change in temperature.